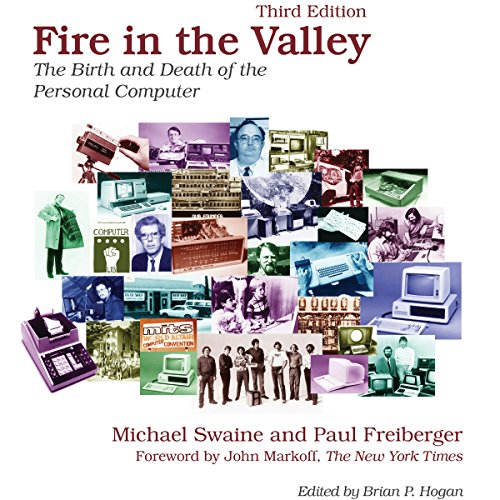 Fire in the Valley

By: Michael Swaine,Paul Freiberger
Narrated by: Don Azevedo
Try for £0.00

In the 1970s, while their contemporaries were protesting the computer as a tool of dehumanization and oppression, a motley collection of college dropouts, hippies, and electronics fanatics were engaged in something much more subversive. Obsessed with the idea of getting computer power into their own hands, they launched from their garages a hobbyist movement that grew into an industry, and ultimately a social and technological revolution. What they did was invent the personal computer: not just a new device, but a watershed in the relationship between man and machine. This is their story.

Fire in the Valley is the definitive history of the personal computer, drawn from interviews with the people who made it happen, written by two veteran computer writers who were there from the start. Working at InfoWorld in the early 1980s, Swaine and Freiberger daily rubbed elbows with people like Steve Jobs and Bill Gates when they were creating the personal computer revolution.

A rich story of colorful individuals, Fire in the Valley profiles these unlikely revolutionaries and entrepreneurs, such as Ed Roberts of MITS, Lee Felsenstein at Processor Technology, and Jack Tramiel of Commodore, as well as Jobs and Gates in all the innocence of their formative years.

This completely revised and expanded third edition brings the story to its completion, chronicling the end of the personal computer revolution and the beginning of the post-PC era. It covers the departure from the stage of major players with the deaths of Steve Jobs and Douglas Engelbart and the retirements of Bill Gates and Steve Ballmer; the shift away from the PC to the cloud and portable devices; and what the end of the PC era means for issues such as personal freedom and power, and open source versus proprietary software.

What listeners say about Fire in the Valley

A 15 hour book is not a newspaper article, so there is not necessarily a rush to get to the point -- the lede, in journalism, which leads an article. But when a book about the history of the personal computer takes 9 hours to get to the story of Apple and 11 hours to reach the introduction of the IBM PC and the ascendance of Microsoft, it has truly buried the lede, as reporters say.

I thought I entered the PC world on the ground floor in 1983, shortly after the introduction of the PC (I had already worked briefly on the Apple II). Indeed, my entire career, a successful one, derived from being there at the start, when the first PCs came out, embracing this new technology that the rest of the established computing world dismissed. But Fire in the Valley tells me that I got into the game shortly after halftime, that I missed the entire start of the game.

Maybe so, but that doesn't make the first nine hours of this book any more interesting. Really, it should have been just a prologue, maybe a chapter or two or three, an hour tops. Otherwise, it's really just a long series a name checking people, products and companies that most people never heard of (and never heard of again after their minor role in PC development was over).

But the last six hours are worth it. The 1999 movie adaptation of an earlier edition of this book, Pirates of Silicon Valley, a great movie, starts off at the 1984 unveiling of Apple's 1984-inspired Super Bowl commercial introducing the Macintosh computer. It then flashes back to the beginnings of Jobs and Woz at Apple, and Bill Gates at Microsoft, and spends most of its screen time on them. The book should have been written that way. It was not. Waiting nine hours for those stories to start -- bad, bad decision.

Still, if you're interested in this subject, it's an illuminating look at innovations that have profoundly and universally changed the way we live our lives.

I do have a couple of other bones to pick. This third edition adds the idea of the death of the PC to its subtitle, the idea that smart phones have rendered PCs obsolete (he writes on his Window laptop -- how can you write a review of this length on a smart phone? You can't.). When this edition came out in 2014, PC sales were still over 315 million worldwide annually, just past its 2011-2012 peak of over 350 million. Of course Smart Phone sales have tripled to over a billion and a half per year since 2011, but really, given advances in technology, a smart phone is basically a PC in a phone (15-20 years ago, I worked on the telecommunications industry committee charged with defining broadband capabilities for mobile phones, bringing computer and internet functionality to the cellular market -- we succeeded!).

But it's easy to understand why these authors have made this mistake. PCs are far from obsolete to anyone who walks into a modern workplace, where one sits on every desk, from the receptionist to the CEO, the majority of tasks still requiring a full work station. But in the narrow world view of this book, the individual home user is all that really matters. Yes, it's impossible to ignore how business has taken advantage of PC technology, but our authors pay no more than lip service. Gamers too have a legitimate gripe at being marginalized.

This narrow view leads to bone-pick #3: if your world view is this limited in scope, Apple reigns supreme. But in the real world, Apple still has a shockingly low market share, as it has had all along -- historically topping out at 6-7% of the annual PC market, and even in the world of smartphones, settling for a share of what remains after Android claims over 80% of all smart phones sold each year. Apple is certainly the world leader in marketing, which is why you probably think it is a leading provider, but the reality is that the open systems it has competed against have always outsold them by factors of 8 to 20.

Even so, the Apple story is a good one, but you have to wait nine hours to reach it in this book.

Covers history that most others do not

A near 50 year story that covers how a memory company created a calculator chip which sparked a world changing revolution. The history of the PC is generally well trod ground, but no others go as far back and give the kind of context to the stories you may have already heard.

I also suggest Turing's Cathedral and Masters of DOOM to bookend this on either side.

Glazes more than a donut factory.

The pre-PC days were interesting, but once we got into the PC era, the focus was far too much on Apple, IBM, and Microsoft. Yes, these are important, but I lived through the 80s, and there were other PC company histories to be given more than just a glaze covering. I'm not satisfied with this book.

great book, but extremely biased towards Apple/against Microsoft. still great book, even with the bias, as long as you already know full history of these entities and people

The best written account of this era I know of. Balanced, thoughtful and accurate with a nuanced view that is just enough nostalgia coupled with context to get a helpful understanding of this remarkable period of American entrepreneurship.