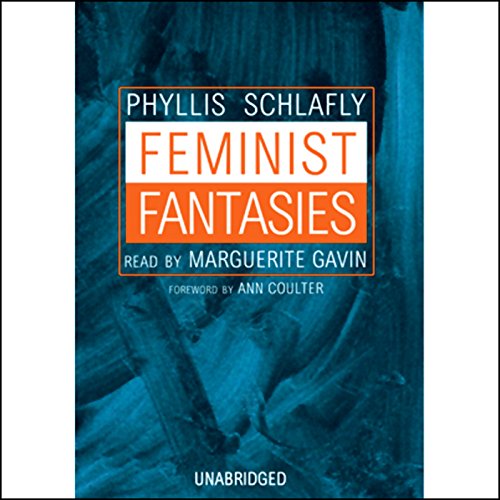 By: Phyllis Schlafly
Narrated by: Marguerite Gavin
Try for £0.00

No ideological assault has been more ferocious than radical feminism's 40-year war against women. And no battlefield leader has been more courageous than Phyllis Schlafly. In these dispatches from the battlefront, feminism's most potent foe exposes the delusions and hypocrisy behind a movement that has cheated millions of women out of their happiness, health, and security.

Phyllis Schlafly was one of the first to recognize that radical feminism, like other destructive ideologies, is at odds with human nature. So as the rest of the intellectual elite fell compliantly into line, she took up the fight for the right to be a woman. Feminist Fantasies is the inspiring story of that fight.

"It's almost unfair for Schlafly to train her analytical mind on the feminists. Time and again she goes like a heat-seeking missile to the heart of the matter....And, as this book demonstrates, she is always right. She has always been right. She will always be right." (Ann Coulter)

What listeners say about Feminist Fantasies

This is a book full of lies&mis representation.It either willfully misrepresents feminism or just doesnt understand it at all


Has Feminist Fantasies put you off other books in this genre?

What does Marguerite Gavin bring to the story that you wouldn’t experience if you had only read the book?

Do you think Feminist Fantasies needs a follow-up book? Why or why not?

One of the finest books on the subject of feminism, well researched and methodically presented. This is a work of serious scholarship, but with the practical insights of a regular woman who is not blinded by the ideological adsurdities of the academic left. Everyone who values ALL people regardless of sex should read (or listen to) this book to hear how some radicals seek to divide us.

This is one of those books...

that inevitably will receive many knee-jerk reactions from politically frenzied people who have never read the thing...but the points Schlaffy makes are clear and precise. Yes, equal rights are important, but modern radical feminism is not about equal rights: it is about hating men and "the patriarchy." It is also about women having to work harder than ever, getting the blunt end of the "sexual revolution" that feminism encouraged, and having a much harder time in relationships that they are trained to despise when things just really aren't that bad most of the time. Look, read the book or don't, but don't judge it until you have turned the last page. (Also see the videos and writings of Dr. Janice Fiamengo and Karen Straughen to see the mindless hate and unfairness that often comes with modern radical feminism. Also Steven Pinker is a good source when he writes or discusses gender: he deems himself an "equality feminist" but eschews the harmful radical stuff.)

There are a few books that come along to give perspective, proper perspective, on how to see the world around you. If you are pro feminist, read this book! If you are anti-feminist, READ THIS BOOK! If you don;t know where you stand on the issue, READ THIS BOOK! Where I never even heard of Phyllis Schlafly, I found that she is a substantial pillar in the conservative movement.

It's an easy read that is really hard to put down. I found myself looking over the book @ 3 AM and realizing how this effects so many issues in every day life. No matter on what side of the issue you stand - Feminism effects YOU every single day.

Must read for all Americanized women!

I leaned feminist in the past...now a fulfilled wife and mother. This book is true.

The author asserts that feminism is propaganda and damaging to women, however it is her own inherent sexism that fuels her misguided beliefs.

I have to admit that I disagree with a few of Phillis Schlafly's points concerning Judeo-Christian morality for the success of America, pornography, homosexual civil unions, and sexual liberation but kept in mind that Schlafly wrote most of her pamphlets between 1982 and the early 2000's. Most of her writings still ring true today and makes one realize that the issues we women face with feminism today is very similar to what they faced during her time. Although much of what she warned against and legal policies have come to a head or is currently being put in place, with disastrous consequences. A must read for any Contemporary feminist, as this woman does not seem to be well known, but her message is still important. be warned, just as you think you ought to stop listening, keep on listening, she will eventually suprise you at the end.

Mots of what the author says make sense but why does she equates faith with family values? I am strongly atheist but that does not prevent me to feel the inequity and the bitterness of feminists. Nor

An Excellent criticism of Feminism in America

Highly recommend to anyone who is either Feminist or no,because it's exposed the hypocrisy, double faces and ugliness of Feminism, and it's ultimate goal to destroy marriage and family and the most important thing that it's written by a highly educated woman,I am so happy that there are some women who are still not deluded by the satanic Feminism Ideology and are eager to Resist it, these women should be encouraged and celebrated to continue with their great mission.

Would you stay at home if the US government subsidized mothers/fathers staying at home instead of paying for child care? For example, stay-at-home parents could get a refundable $8,000 childcare tax credit, a $15,000 homeschooling tax credit, or a $3,000 child tax credit regardless of whether they worked or not. Stay-at-home women with more than two children will contribute more to Social Security and medical benefits than a single wage person. Has anyone ever wondered why we don't offer incentives or assistance to stay at home parents?

Why don't we teach feminist studies with emphasis on Motherhood?