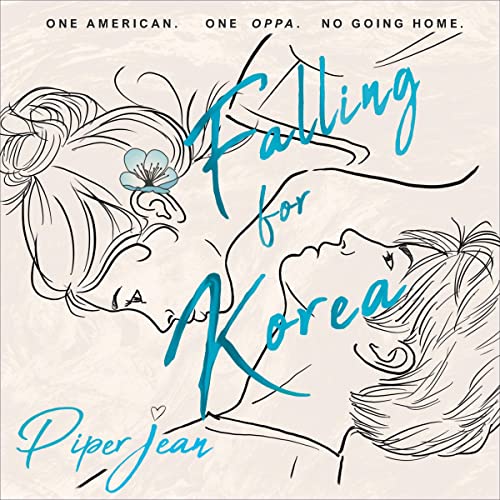 By: Piper Jean
Narrated by: Laura Lockwood
Try for £0.00

America meets K-drama in this roller-coaster plot with a fresh take on romance and what it means to be family.

When Sydney is sent to Seoul to live with a family she’s never met, she encounters unexpected chemistry with their son, but must fight to unravel the mystery of why she was sent away. Will she be able to get home before it’s too late, or will Korea turn out to be just the thing she needed?

California teen Sydney Moore doesn’t know why she’s been shipped off to spend her senior year in Korea with the wealthy godparents she barely knows. What was her mom thinking? The Kims are never even home. And their son, the guy that’s supposed to help Sydney adjust to school at the elite Daeshim Academy, is totally MIA. As soon as Sydney can scrape together enough for a ticket, she’s flying home.

Korean chaebol Kim Chul knows his parents care more about company shares than they do about him. So why did they dump some American girl in his lap senior year? They must have an angle; they always do. The best way to end their schemes is to send her packing.

Chul’s game plan changes when his rival, Gun, starts hanging around. Sydney thinks he’s a nice guy, but Chul knows Gun has a dark secret. Determined to protect Sydney, Chul decides she needs a boyfriend—fast. And who better than him? But there’s a problem: Sydney already saved his contact as Loser.

Things get complicated when Sydney’s mom cuts off contact. As Sydney begins to uncover the devastating reason she was sent away, she’s even more determined to get home. But leaving isn’t so easy, especially when you’ve already started to fall for Korea.

What listeners say about Falling for Korea

Wish there was a series 2!

Loved it. The plot was not hard to follow. It is just right for coming of age storyline. And the romance part is just the right, neat but will make the heart flutter.

Loved the book and the story! Binge listened in 1 day. Very easy listen and love that they got a happy ending.

Loved this story. I thought I was watching one of MT Kdramas. Love to see this made into a K drama series.

Not your basic love story

This love story of a young couples isn’t the normal drama one goes through at their age. Even though they were young, their love felt real and deep. I liked the females voice but if they had a man doing the man’s voice, I would feel a deeper connection with him.

Exactly what I wanted!

It was perfect! the pace, the story, the characters... I felt as if I was seeing a K-drama (I hope it turns into one!). I know some dramas are too painful and that was my only fear, but you managed the story with grace and I loved every single chapter and every character. And yes, the cover is perfect! Please do more!!!!

This was an amazing novel. Wonderful job. I love that it is so nice to hear a positive novel.

Captured me from the very beginning

So we'll written! I had a hard time putting it down. Great characters, believable story line that unfolded masterfully. Can't wait for her next book.

Loved it so much

I really loved this book, I have it on here but I bought it as well so I can read it anytime I want. I love the whole story line.I can't wait to see what your next book is like. I hope they would make this one into a movie or show I would so watch it.

Loved this book so much. The writing created great imagery that was totally complemented by the narrator. The pace seemed just right as some Kdrama’s can drag.