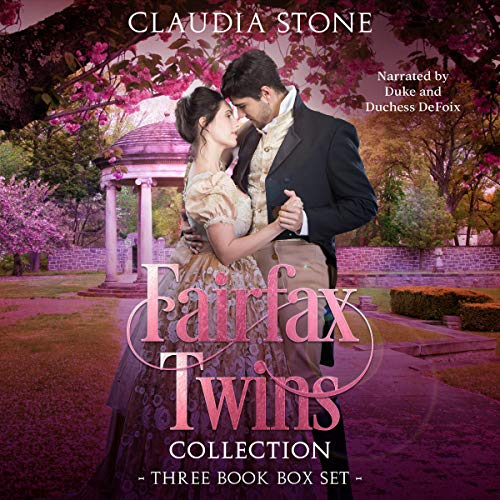 By: Claudia Stone
Narrated by: Duke DeFoix,Duchess DeFoix
Try for £0.00

Love, fun, and laughter abound in this delightful Regency collection.

The Duke's Bride in Disguise

When poor orphan Ava Smith comes face to face with a girl who looks exactly like her, she is certain she has seen a ghost! But Lady Emily Fairfax is no ghost, and is sure that she and Ava must be long lost twins. Despite her better judgement, Ava allows Emily to convince her to swap lives for a month, in order for Ava to scupper Emily’s engagement to a coldhearted brute of a man. Imagine Ava’s surprise when Emily’s betrothed turns out to be none other than her unrequited crush, the Duke of Kilbride!

Raff Alexander Hamilton, the sixth Duke of Kilbride, knows that he must do his duty to the line by marrying and procuring an heir. Love was never in the equation in his search for a bride. All that he required was a lady who was well-bred, quiet, and biddable - and he thought that he had found just what he was looking for in Lady Emily Fairfax. Imagine his surprise, when overnight, his betrothed goes from meek and compliant to outspoken, alluring, and decidedly unimpressed with him.

As Raff battles to woo his bride-to-be, Ava must navigate the sumptuous world of Regency London, while trying desperately not to fall in love - no matter how much her heart wants it.

The Duke's Governess in Disguise

Desperate to extricate herself from a loveless arranged marriage, Emily persuades her new-found twin to swap places with her for a month. The plan is for Ava to stay in London and scupper Emily's engagement, whilst Emily takes Ava's place as a governess in Kent. It seemed like the perfect plan until Emily comes face to face with her new employer, the devilishly handsome Duke of Hemsworth - the ton’s most notorious rake.

After the death of his best friend, Lord Dunstable, Robert Charles Adrian De Lacey, sixth Duke of Hemsworth, had found himself with two wards. Determined to do right by them, Rob vows to leave his life of debauchery in London behind, a vow which is quickly challenged by the arrival of the children’s beguiling new governess, Miss Ava Smith. Knowing that he can never make a commoner his bride, Rob tries to push his attraction to Miss Smith aside, but despite his best efforts sparks soon begin to fly between the pair.

Their burgeoning romance is dramatically interrupted, however, when it becomes clear that a mysterious someone is seeking to hurt both Rob and the children. Can Rob discover who the villain is before they harm his wards? Moreover, can he resist his enchanting governess?

The Importance of Being Eunice

For four seasons, Lady Eunice was quite content with the mantle of wallflower. Bespectacled, frumpy, and put-upon by her overbearing mother, all she really wished to do was vanish from London once she came of age to inherit her fortune. The sudden reappearance of her childhood sweetheart, the dashing Theodore Belhurst, soon changes her mind, and Lady Eunice decides that she does wish to wed after all.

But how does a girl so unremarkable, she's often referred to as "Lady Who?" attract the attention of society's favored son? Why, she enlists the help of a duke, of course! A faux engagement to the arrogant, abrasive, and sinfully handsome Duke of Belmont is certain to make Theodore notice her.

Never mind that she had to bribe the man into agreeing to her proposal, nor the fact that she cannot stand his haughty ways, as long as he helps her win Theodore's heart, Eunice decides she can stomach pretending to be his betrothed for as long as is needed. But when she begins to see beneath the duke's hard exterior, to the wounded man beneath, Eunice begins to wonder if she's actually chasing the wrong man.

Delightful, funny and thoroughly enjoyable. The male narrator was spot on but I had a problem with the female narrator. I found her accent slightly strange, fine most of the time but distinctly odd at others. Spoilt my enjoyment a little but the stories were good enough to overcome this.

Loved this whole series of 3 short stories. They were very clean, sweet and funny. A bit too clean for my liking though I like a bit of steam in the stories I listen to, especially with this duo of naarrators, they are absolutely brilliant, they are at the top of my short list of my favourite narrators.

This collection is so much fun. Add together some mystery, some romance, and some great characters, and it is a good read. But then add in the phenomenal narration and you have a great book. I don’t think I have ever enjoyed listening as much as this. I loved that men sounded like men and women sounded like women. I wouldn’t mind if these two narrators did a lot more of the books I listen to. A good job of narration can make or break an audio book for me.

Three books are better than one

I simply enjoyed this three book set. The narrators were marvelous. The first book, The Duke's Bride in Disguise, introduces us to Ava and her unknown twin Lady Emily. Neither knew the other sister existed. When they meet, they agree to change places for a month. Lady Emily wants to end her engagement to the Duke of Kilbride and thinks Ava can get the job done. Their switch will change everyone's life. The second book is The Duke's Governess in Disguise, is Lady Emily's story, while pretending to be Ava. When she arrives to take her new position to the Duke's two wards, she never expects her life will change forever. The third book is The Importance of Being Eunice and she is a friend of the twins. Eunice has always considered herself the ugly duckling,but she wants more. After coming across the Duke of Belmont, they come to an agreement to help her get her true love. Delightful box set.

I love a bit more spice, it was a good G rated story... great narration!

The third book was my favorite and could be a stand alone read. The male narrator was excellent 5 star! The female narrator was annoying! The only thing that made her tolerable was speeding it up. Even then she was irritating. But overall I enjoyed the stories.

I absolutely loved the narrators. They just made these stories something you could live in with the characters. The only thing wrong with these stories is that I felt that the writer could and should have taken more time to write out scenes. (Partial spoiler) - Her true loss was skipping over the rescue scene in the first book. She truly missed a great chance by not writing the scene from the duke there. Other then missing what would have been some great story parts all three books were wonderful. I would recommend.

I initially was absolutely enchanted and excited to read this. However once the female narrator started, it was like nails on a chalkboard! Ok, it wasn't that bad at FIRST, but it absolutely GOT that bad. (Side note... I think its BS that “Duke” and “Duchess” hide behind pseudonyms. I like to research the narrators I listen to, but these two have even their “real” page just as fake. Why the need to hide? No a fan of that kind of game so thats a huge turnoff. “Duke” was at least a good narrator...I can understand why “Duchess” hides though...). Back to the story review.... The story wasn't awful, except it was just SO fast that it wasn’t enjoyable. The sisters met in a shop and in 2 minutes were loving each other and trading lives with no knowledge of anything about each other or their lives! Then expected to be a believable replacement for each other? I love the idea of the story, and the promise it held. And I absolutely love the idea of the first two books sharing perspectives from each sisters side! However, there could have been mush more detail, and time invested, to make this a real good story. As it is, I gave up and didn’t finish it. And, I’l going to ask audible to remove it from my library. I don’t like leaving reviews that are not happy, but this was one of those books that was sent to me specifically FOR leaving a review so I kind of have to.

Final thoughts. If you like the detail-less kinds of stories, then by all means try this one. The story has promise. The female narrator however... good luck with that one!

This was such a cute series! You can’t help but fall in love with the characters!

Cute,Clean, repetitive when listened to together. These are really cute. Kind of typical, but really cute. If you listen to them together they are repetitive.

Books 1 &2 are both sides of the same story cleverly told. The Fairfax twins finally meet and Ava's story is revealed in book 1. Book 2 is Emily's story and share the same prologue. Their lives are intertwined and all is finally revealed in Book 2, Book three involves Eunice who is a family friend. It has all the charm of a period piece and the characters are endearing. The narration was excellent.
I received a free copy of this story in exchange for an honest review.