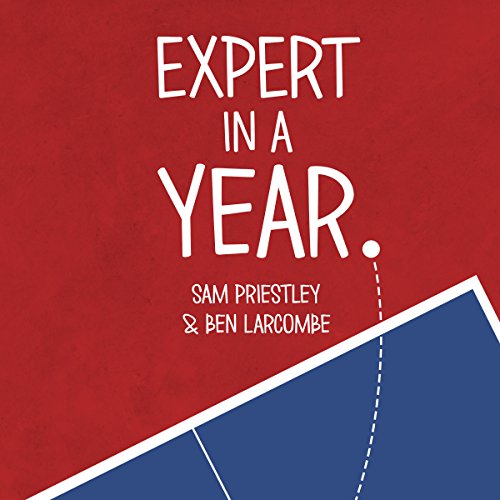 Expert in a Year: The Ultimate Table Tennis Challenge

Sam Priestley was never Mr. Sporty. After failed attempts at rowing and running, he had given up on the possibility of becoming a sportsman. That was until childhood friend and table-tennis coach Ben Larcombe convinced him to act as the guinea pig in an experiment he had concocted: The Expert in a Year Challenge.

Starting January 1, 2014, novice Sam was immersed in the world of competitive table tennis. He began training every day and, over the course of the year, notched up hundreds of hours of practice in an attempt to reach a seemingly impossible goal. There was blood, sweat, tears, injuries, frustrations, and moments of elation as the pair traveled up and down the UK and beyond in their quest for training, mentors, and competition.

Sam found potential he never thought he had, got better at table tennis than most people thought possible, and discovered what it feels like when 1.5 million people watch you fail. Here is their story, including all the ridiculous training methods and unreachable goals and the surprising lessons they learned from playing table tennis every day for a year.

What listeners say about Expert in a Year: The Ultimate Table Tennis Challenge

insightful and fun to listen too. gonna do my own expert in a year challenge! I wish they would have focused a bit more on the walls that he hit and maybe a bit more outside the box thinking since I'm sure many people are gonna use the same principal in other skill sets. all together a good book and no regret in the buy.

more than a book about ping pong...

each chapter highlights a specific period of time in the "expert in a year challenge )" and is a very fun concept, but more than that is how people learn skills, the practice needed, amd the hours spent. thats what this book is really about. another concept talked about is of "burn out." i struggle with this in my own sport and plan to implement strategy to my training instead of going all out all the time. more than a book about ping pong, a book about the process of achieving goals.