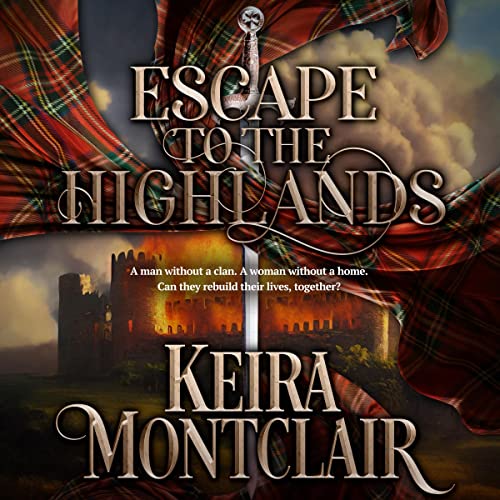 Escape to the Highlands

Secrets threaten to destroy them, but can they uncover the truth behind the lies?

Symon MacKinnon, eldest son of the chieftain, spends his days training with his sword and his nights drinking his clan’s famous whisky. But after many peaceful years, the clan is unprepared for the attack that seems to come from all sides. He fights like the devil but seeing his father and brothers slaughtered and the keep laid low by the marauders, he is barely able to escape with his sister and one young clansman in tow.

Johanna Murray never had an easy life but the past two years have been especially difficult since her parents sold her as a servant to a family that mistreated and frightened her. She tries to make the best of it but when they humiliate her in public, pushing her down on a muddy town street, Johanna is holding onto her pride by a thread.

Symon can’t believe his eyes when he sees a small cluster of people kicking at a young woman in the street. He intervenes before he can stop himself and finds himself lost in the most beautiful blue eyes he’s ever seen. How will he save this beautiful woman when he couldn’t save his clan?

He’ll find a way—not only to rebuild his clan but to rescue the woman who captured his heart with a single look.

What listeners say about Escape to the Highlands

I have never read or heard a book read by Keira Montclair that I have not immensely enjoyed. Thankful for her brilliant mind, characters, and stories.

Lost Then Found and Beginning a New Wonderful Life

I think I have read or listened to all of this author's books and every time I finish a new one, I say, "it's the best one yet" and yes, I'm saying it again. I felt like I was living there with all the characters, as she writes with such a flair and makes me see things in my mind as if they were real. The story had so many things that drew me in; cruel man, forced marriage, revenge, greed, treason, and lies but wonderful things also happened with new beginnings, finding love, discovering new friends and meeting gracious neighbors. I love Paul Woodson's voice and he always pulls me into whatever book he is narrating. He is one of a few that can hold my interest and my mind doesn't wander when he is telling the story - definitely one of the very best narrators! I highly recommend this clean, romantic, well-written book - it will leave you smiling and happy that you listened to the wonderful narration by Paul Woodson!

A hero with a heart of gold.
He has to fight to keep his sister and young stable hand safe and in a home.
The twists and turns he goes through is interesting and you can't help but fall in love with him.
The narrator did a wonderful job with each character. I love Paul Woodson's voice.

Keira does it again with this lovely, low angst, Scottish Medieval Hallmark Movie-style Romance sure to leave you feeling good with a smile on your face.