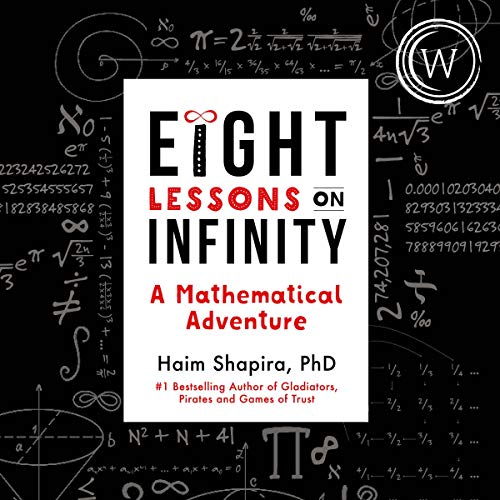 By: Haim Shapira
Narrated by: Quentin Cooper
Try for £0.00

A fun, nontechnical, and wonderfully engaging guide to that most powerful and mysterious of mathematical concepts: infinity. In this book, best-selling author and mathematician Haim Shapira presents an introduction to mathematical theories which deal with the most beautiful concept ever invented by humankind: infinity.

In this book, best-selling author and mathematician Haim Shapira presents an introduction to mathematical theories which deal with the most beautiful concept ever invented by humankind: infinity. Authored in clear, simple language and aimed at a lay audience, this book offers some strategies that will allow listeners to try their ability at solving truly fascinating mathematical problems.

Infinity is a deeply counterintuitive concept that has inspired many great thinkers. In this book, we will meet many sages, both familiar and unfamiliar: Zeno and Pythagoras, Georg Cantor and Bertrand Russell, Sofia Kovalevskaya and Emmy Noether, al-Khwarizmi and Euclid, Sophie Germain and Srinivasa Ramanujan.

The world of infinity is inhabited by many paradoxes, and so is this book: Zeno paradoxes, Hilbert's "Infinity Hotel", Achilles and the gods paradox, the paradox of heaven and hell, the Ross-Littlewood paradox involving tennis balls, the Galileo paradox, and many more.

Aimed at the curious but nontechnical listener, this book refrains from using any fearsome mathematical symbols. It uses only the most basic operations of mathematics: addition, subtraction, multiplication, division, powers, and roots - that is all. But that doesn’t mean that a bit of deep thinking won’t be necessary and rewarding.

Created with humor and lightness of touch, Haim Shapira banishes the chalky pallor of the schoolroom and offers, instead, a truly thrilling intellectual journey. Fasten your seatbelt. We are going to infinity, and beyond!

What listeners say about Eight Lessons on Infinity