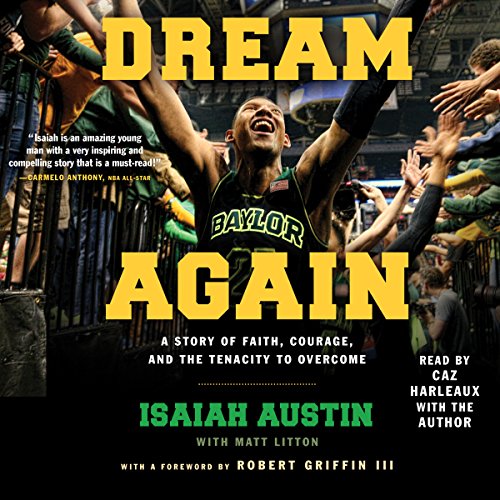 By: Isaiah Austin,Matt Litton
Narrated by: Caz Harleaux
Try for £0.00

The inspiring story of Isaiah Austin, the man who captured our hearts when he was made the honorary NBA draft pick after a shocking diagnosis ended his professional basketball career before he could even step onto the court.

"There are two choices in life: you make it your excuse or you make it your story." Isaiah Austin's mother shared these words of wisdom with him as a child as he came to terms with a torn retina that took away the ability to see with his right eye. Faced with adversity at such a young age, Isaiah had to choose - let his disability define him or overcome the challenge and shine.

Overcoming that challenge is exactly what Isaiah did as he made a name for himself on Baylor University's NCAA Division 1 basketball team. Everyone expected Isaiah to have a successful career in the NBA after college, but on June 21, 2014 - just five days before the NBA draft - Austin was diagnosed with Marfan syndrome, a genetic disorder that affects the body's connective tissue, putting him at risk of rupturing his heart if he continued to play basketball. In seconds Austin's hopes for a career in the NBA became impossible.

After hearing about Isaiah's diagnosis, NBA commissioner Adam Silver invited Austin to attend the 2014 draft as his personal guest. The league recognized Isaiah's courage, resilience, and determination in a bittersweet moment when he was made an honorary draft pick.

Rather than letting another challenge destroy his faith, Austin has once again strived to overcome adversity by becoming a spokesperson for The Marfan Foundation, raising awareness and understanding for the disease.

Proceeds from Dream Again will go to the Isaiah Austin Foundation, which provides support for the awareness and research of Marfan syndrome and those affected by it.

What listeners say about Dream Again