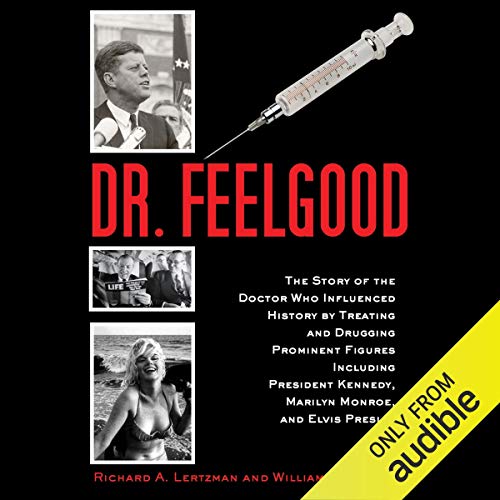 By: Richard A. Lertzman,William J. Birnes
Narrated by: Don Azevedo
Try for £0.00

An addictive listen about the controversial Dr. Max Jacobson and his high-society clientele of over 200 celebrity patients that he injected with an amphetamine cocktail from the 1940s through the 1970s. Richard A. Lertzman  and William J. Birnes' scandalous exposé piles shock on top of shock, from the cover-ups of mysterious deaths and FBI raids to President John F. Kennedy running naked through the Carlyle Hotel.

Thorough research and collected interviews combine with Don Azevedo's easy pacing to produce chapters that fly by. Dr. Feelgood's web of shadowy influence is nothing short of astonishing, sure to thrill any listener interested in our recent history, the nature of celebrity, or the perils of addiction.

An historical exposé of the mysterious doctor who changed the course of the 20th century, with interviews by George Clooney, Yogi Berra, and others.

Doctor Max Jacobson, whom the Secret Service under President John F. Kennedy code-named “Dr. Feelgood,” developed a unique “energy formula” that altered the paths of some of the 20th century’s most iconic figures, including President and Jackie Kennedy, Marilyn Monroe, Frank Sinatra, and Elvis. JFK received his first injection (a special mix of “vitamins and hormones,” according to Jacobson) just before his first debate with Vice President Richard Nixon. The shot into JFK’s throat not only cured his laryngitis, but also diminished the pain in his back, allowed him to stand up straighter, and invigorated the tired candidate. Kennedy demolished Nixon in that first debate and turned a tide of skepticism about Kennedy into an audience that appreciated his energy and crispness. What JFK didn’t know then was that the injections were actually powerful doses of a combination of highly addictive liquid methamphetamine and steroids.

Author and researcher Rick Lertzman and New York Times best-selling author Bill Birnes reveal heretofore unpublished material about the mysterious Dr. Feelgood. Through well-researched prose and interviews with celebrities including George Clooney, Jerry Lewis, Yogi Berra, and Sid Caesar, the authors reveal Jacobson’s vast influence on events such as the assassination of JFK, the Cuban Missile Crisis, the Kennedy-Khrushchev Vienna Summit, the murder of Marilyn Monroe, the filming of the C. B. DeMille classic The Ten Commandments, and the work of many of the great artists of that era. Jacobson destroyed the lives of several famous patients in the entertainment industry and accidentally killed his own wife, Nina, with an overdose of his formula.

What listeners say about Dr. Feelgood

Clearly well researched book, with footnotes and sources included in a well-fitting way that doesn't break the immersion of the listening experience. The performance was great- it felt like listening to a one person podcast, which is a style I greatly enjoyed, making it feel more engaging. The downside for me was the frequent repetition of information we'd just been given, or reintroducing people who had already been introduced with their name and occupation and pertinent information not too long previously .

This was a fascinating listen. I never knew that John F Kennedy was so addicted to drugs. Also so many other celebrities. So much was hidden during that era. It certainly explains a lot regarding Kennedys assassination. Also his womanising and sexual appitite.
(a side effect of the drugs). Max Jacobson had no real regard for people's welfare regarding their subsequent addiction and the detrimental side effects of what he was injecting them with. Alarm bells should have been ringing loudly for all in relation to his filthy attire and surroundings. Such was their level of addiction all this was ignored. Max Jacobson had a lot to answer for. A major power play for him also. He played with and messed up so many lives not to mention his poor wife. Highly recommended with clear and precise narration.

Great listen and astounding how many well known people were his patients. Also alternative perspective on the JFK assassination.

The Court always has its Soothsayers

I downloaded this because first I thought it was about a very good English rock band and then on realising the main premis of the story, that it would be about Elvis Presley (in a year that more is revealed about his lifelong illnesses and yet more on his drug abuse). It’s neither. Whilst Presley is named-checked in the Appendix - as are numerous famous people, including Churchill - this is based on JFK’s drug addiction and those in his inner circle, including the drug-peddling, sociopath Jacobson. Quite rightly references are made to Hitler and his similar arrangements, and possibly, a reference to Rasputin might not have gone amiss. Because whilst the structure of this book falls away towards the end - resulting in a lot of repetition - the book struck me as a not untypical description of the Ruler, the Court, and the Courtiers. And outside the Court those who would want to protect their nation and those who would want to Rule. And as often is the case, the wizards and the magicians, the soothsayers and the advisers crowd round. Written more recently, one might make the almost inevitable reference to Game of Thrones. So even if you know how and even why JFK, Monroe and others were either assassinated or murdered, the Bay of Pigs fiasco, the Cuban crisis, and you know of the drug reliance that still today is the scourge of society, this short book is worth sticking with. You will have sympathy for all the main characters and then possibly feel the complete opposite by the end. Worth a listen from the Included library. Stuart

Dr feelbad more like. What a horrible nasty little man getting people addicted the way he did. Thinking he’s god.

I should have been more careful before I used a credit on this one. It's so poorly written that I couldn't get through the first half. The claims are unsubstantiated and salacious.
National Enquirer type story ...

Superbly written and the superb narration enhanced the writing. The ONLY part of the book I will take issue with is opening up yet another conspiracy theory touting more than one gunman for JFK's assassination. I will admit that the book does give a fascinating motivation for killing Jack Kennedy, one that I had not thought of nor have ever read in any other of the thousands of books and various accounts over the decades. I guess in some ways, the authors of this book had to address the issue given the good doctor's rare proximity and relationship to JFK, so I guess I have to forgive its conclusions. I salute the book for exposing the "good ol' days" as not at all so good. So many celebrities, so drug affected. Many might blame the doctor, forget that. Personal responsibility is something that has always plagued human beings from the dawn of time. Take some responsibility for yourself, stop blaming others and man up, cowards!! Anyway, this is a book that should not be missed by those who love the micro-history of the past.

As expected, this was easy to digest, shocking, well-researched information about world leaders and celebs in the sixties and seventies completely high on speed for huge chunks of history. It "read" like a documentary on the History Channel, and that's what I was in the mood for. I just wish it had been a bit more detailed and longer.

An entertaining story. Well narrated. I like to know the back-story of the main character and this book does not disappoint. The conspiracy theories about JFK and Nixon are a wee farfetched, but it only adds to the allure of Dr. Feelgood. Just sit back and let the sun warm you, this is a great listen.

The 60's rich, famous and drugged

Would you consider the audio edition of Dr. Feelgood to be better than the print version?

As I listen to a lot of audio books due to being time constrained, the audio version got to the heart of the story very quickly and allowed me to get through the book a lot quicker than if I had read in print.

What was one of the most memorable moments of Dr. Feelgood?

This was a great book and revealed a lot about what was actually going on in that era.

I just can't believe it! crazy!

Quite mind blowing to know all those people were on meth! scary. so much power.

Hard to swallow parts of this story.

No, although it is a fascinating subject but also full of what I consider irresponsible speculation.

The authors stretch the bounds of credibility when they veer off into wild speculation as to the Kennedy assassination and the good doctor's blame for it. I half expected them to place Jacobson on the grassy knoll with a rifle.

The most disturbing aspect of this book is President JFK's addiction to the doctor's "miracle elixir." If, in fact, half of what is written is true, it is scary how modern history was influenced, if not written, by a doctor pushing amphetamine-laced dtugs. Full of anecdotes and accounts that are well documented, it is hard not to believe this book is an accurate account of several decades of the last century.

Elvis? well i listened to all but the last 20 minutes I didn't hear anything about Elvis but I did hear about JFK running around naked and Marilyn Monroe for 90% of the book I thought I was going mad (possible) because I felt like parts of the book were repeated to the extent I ckd my phone to see if I had bump the back button.

May very well answer why JFK was assassinated

After reading the preview, I didn't think anything else in the book would surprise me. Boy was I wrong! This book reveals one of the skeletons in America's closet and may be one of the most important contributions to the collection of evidence as to why JFK was assassinated (I won't spoil the experience by giving anything away here). In this reader's opinion, this book is one of the most important historical books of the United States in the 20th century. It reads like fiction, the narration is seamless and doesn't get in the way of enjoying a great story. The book was over before I knew it, a sure sign of its ability to hold the reader's attention. My wife also greatly enjoyed it. I highly recommend it to anyone, I believe most readers will appreciate this story.