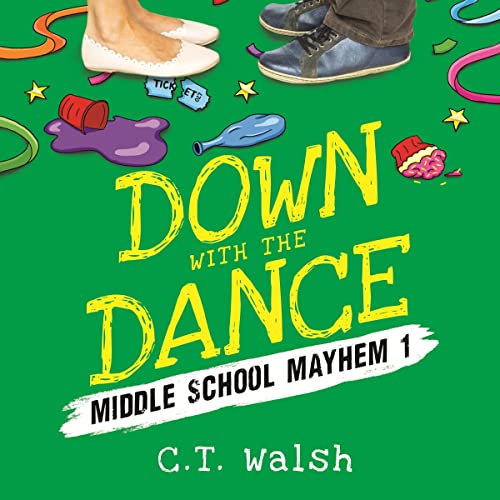 Down with the Dance

Middle School Mayhem: Down with the Dance is the first book in this action-packed, hilarious series.

Meet Austin Davenport, whose fabulous luck landed him on this earth only 11 short months after his brother, Derek, putting them in the same grade. While Austin's brain power is unmatched, it appears as if his brother got all the athletic gifts and the family butt-chin, meaning their parents love Derek more than Austin, or so it seems.

Join Austin on his journey through the tumultuous waters of middle school as he navigates the swampy and undeodorized hallways and explores the depths of the cafeteria's seafood surprise.

Oh, and someone is plotting to take down the Halloween Dance, the one that Austin has his sights set on, so he can take Sophie Rodriguez, a girl way out of his league, but who doesn't seem to know it.

Can he stay one step ahead of the new principal who has it out for him? Will Austin figure out who the perpetrators are? Will he save the dance in time? Will he wear a diaper on a stakeout?

This first in a planned series of twelve will have you ROFLing like you never have before.

The funny and fast-paced nature of this series is meant for middle grade and early young adult readers.

Beware! This series has the tendency to turn reluctant listeners into eager ones.

What listeners say about Down with the Dance