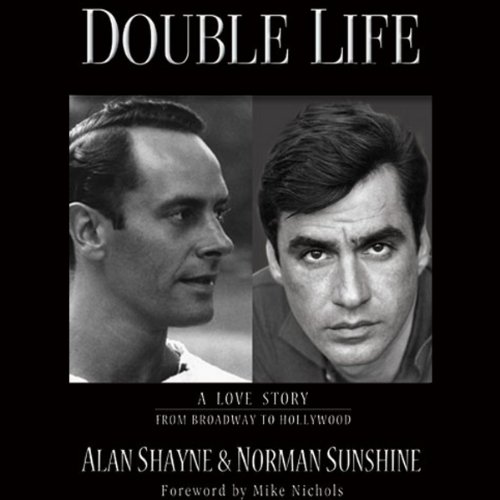 By: Alan Shayne,Norman Sunshine
Narrated by: Ethan Sawyer
Try for £0.00

Gay marriage is at the forefront of America's political battles. The human story at the center of this debate is told in Double Life: A Love Story, a dual memoir by a gay male couple in a 50-plus-year relationship. With high profiles in the entertainment, advertising and art communities, the authors offer a virtual timeline of how gay relationships have gained acceptance in the last half-century. At the same time, they share inside stories from film, television and media featuring the likes of Marlon Brando, Katharine Hepburn, Rock Hudson, Barbra Streisand, Laurence Olivier, Truman Capote, Bette Davis, Robert Redford, Lee Radziwill, and Frances Lear.

What listeners say about Double Life

Love warts and all

A charming memoir from two creative men who shared their lives through the highs and lows of life. Ethan Sawyer the narrator, does a good job of projecting each of the two mens point of view, although, for me I found I taxing to keep track of which of the pair was recounting what. perhaps a second performer would have made the division clearer.

This book is great - it's far better than Ambien.

This book book will put you to sleep faster than a sleeping pill, and it's far far less addictive.

Portrait of a Marriage--Before Gay Liberation

The story of a legendary same-sex marriage between two of New York’s most admired art-world AND Broadway stars.

Shayne was a Broadway actor who went on to produce many hit TV shows and retired as President of Warner Brothers Television in 1986.

Sunshine has been a successful and celebrated artist and sculptor. The two trade off writing every chapter—a dual memoir!

Double Life covers both of their coming-of-age stories: childhood snippets, how they met, and lots of honesty around their relationship’s ups and downs.

The second half is kind of like "Ill-Equipped for a Life of Sex"—truthful, but not uncomfortable.

Within their careers and relationships, there is a solid history of the entertainment worlds with plenty of gossip; from Marlon Brando on Broadway to the New York art scene in the 1950s and 60s to TV and "The Dukes of Hazzard."

Double Life has hit a nerve among longtime gay couples, particularly men, who ask, “Where are we? How come there are no stories about us?” It’s completely delightful and real—I can see why this has been a sleeper hit.

I have absolutely nothing in common with these two "extraordinary" men. But, I felt so touched and filling with love and a profound respect for them. The narrator was superb, and he brought richness and depth to the story. Sometimes,I felt as though I was right there with them. They've gone through so much together. And at a time when being gay was the epitome of "taboo" Yet they remained togethet through all the ups and downs of any heterosexual couple might experience; actually much more. I also enjoyed the way it brought to life love. Not just between two men but, between two people who just wanted to make there way in the world. And most of all proving that "Love is love". I fell in love with Norman and Alan. Thank you for sharing your stories. And I'm so happy you got to see same-sex marriage legalized, and were able to marry. You are wonderful. `♡♡~

How delightful it is and so good to read warm, caring, and romantic stories about gay men.

I'm really enjoying this. It's an interesting insiders' look at Broadway, Hollywood, and gay life in the 50s on. The obvious thing here is that since is a dual biography, switching back and forth between two people, there should have been two readers, making it easier to track who's speaking.

the personal and the professional

Alan and Norman’s successful professional lives get most of the bandwidth here but the book will no doubt be interesting to anyone into the worlds of art and design in NYC and TV and film casting and production in Hollywood across the last few decades of the 20th century. I also enjoyed their particular gay perspectives on those worlds. There is also, of course, the ‘plot line’ of their struggle to maintain a generally wonderful and touching 50 year relationship. The narrator sounded a bit too haughty but was otherwise good. Regarding the audiobook’s production, it would have been far easier to track who’s who if two narrators were utilized: that’s a big error in my view but not a deal breaker. He did mispronounce a few celebrities’ names, most egregiously and often (dozens of times), TV producer and personality David Susskind. The last syllable of his name is like unkind not kindergarten. Evidence of this readily exists on YouTube so there’s no excuse. I’m sure, in time, I’ll forgive the man. lol

Best story ever! Not pretentious or boastful, just honest. A beautiful look into the lives of two men who loves each other through everything their lives dealt out.

I was moved by the love these two men have for each other if only the rest of us could follow there example.

I feel so more assured in my relationship of 10 years after listening this dually told love story.

But I never knew there were so many superlatives in the English language. They lived an interesting life and spoke from the heart. The name dropping was truly part of their story and not to impress. They were monogamist but as they conveyed their tale through the AIDS epidemic they cast no judgments towards individuals that lived a more promiscuous lifestyle. I recommend this book.

The book contains a dizzying array of anecdotes by two men whose lives have intersected with those of some of the most notable celebrities of the art, advertising and show business. The gossip is there, but never mean-spirited - and this is an invaluable recounting of life in New York and Los Angeles’s inner circles during the 50s, 60s and 70s. This is a treasure trove of celebrity stories you’ll want to repeat at dinner parties for months to come.

It is also the story of two men who kept their relationship alive through the good and bad times when homosexuality was still taboo — until they finally had the right to really be themselves and marry. The prose can be a little purple at times, but hats off to Alan and Norman for telling their story in a very entertaining and moving book.