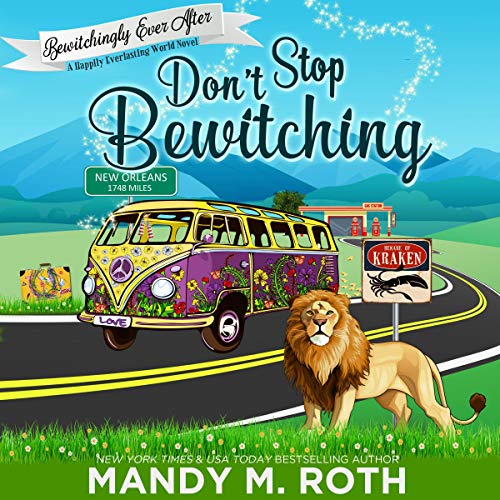 Welcome to Hedgewitch Cove, Louisiana, where there's no such thing as normal.

Cat-shifter Curt Warrick doesn't want to take a road trip with five other guys, but when his best friend leaves him no choice, he finds himself in a van, stuffed full of men, headed to Louisiana. It should come as no surprise when everything that could go wrong on the trip does. That's okay though, Curt is used to the weird and wacky; after all, he was born and raised in a town that is the epitome of it all. There is a bright side. The trip will give him a chance to expand his enterprise.

There is nothing Missi (Mississippi) Peugeot hates more than rich men who think they can throw money around to get what they want. Okay, that's a lie. She hates change. That's why she's happy to stay in her tiny hometown of Hedgewitch Cove, Louisiana. Protected by magic, the town has kept its quaint, cozy feel - that is until a flashy, yet fetching, stranger shows up in a van that screams "flower power", announcing he's looking to buy property and begin developing the town. Missi's grandmother always warned her that her words had consequences. When she speaks out of anger, the magic in her rises to the challenge, putting a curse on Curt. Not that the man needed any help in the cursed department, seeing as how he already has a spell of chaos cast over him. By whom, they don't know.

Now, Missi just has to keep Mr. Flashy alive long enough to get him back up North where he belongs before her words come back to haunt him. There is only one slight hiccup with her plan: Every second she tries to keep mishap from befalling Curt leaves her one step closer to wanting him to stay.

I'm all for suspending my disbelief in order to enjoy a good story.

I draw the line, however, at hanging it by the neck until dead.

A road trip you won't forget.

A fun listening adventure. The narrator understood all the characters and portrayed them well. The humor kept the listener entertained. It was fun to see the guys dealing without their wives for a time.

Everlasting seems almost normal compared to Hedgewitch Cove. Curt was not excited for a road trip with five other guys but their wives wanted a break. He liked the guys alright, just didn't look forward to being trapped with them for hours in a hippy-van. Who knew what little spells or curses they be dealing with. Little did he know he was the target this time.

Curt didn't plan on finding a mate like the rest of these guys. Wouldn't mind getting to know Missie though. Watching the guys deal with the strange goings on, the added curses and threats while pushing Curt and Missie together is a blast. There are the baked down curses, the ghost with...gotta read to find out and all the other oddities. Just the place for them. Will they live long enough to free Curt from his spells and curses?

Another fun encounter with the supernaturals, hunters, and witches.

B. J. Harrison's performance was great as usual; but the story left a lot to be desired.

Half the book or more was spent leading up to when Curt and Missi met then once they met they were mated and pregnant in the span of a few hours. For me, this was a little too wham-bam-thank-you-mam. There could have been so much more to this story and there should have been. I think it would have been better if the couple met earlier on in the book before all the mishaps started so that they could deal with and sort through the mishaps while allowing their feelings and sexual tension to grow. Personally, I enjoy the build up and then climax when it actually happens. There was far too little romance in this story. I would only recommend this book if you are a fan of the Happily Everlasting Series and want to keep up with what is happening with each character. Otherwise, skip this for something better.

Cute and quirky, I would have to get used to the new Characters, makes me miss Everlasting .

I would recommend this r.

Such a fun book!

If a Hallmark movie and SyFi fantasy series had a baby, this book would be it. This is one of those books that I would encourage a friend to commit to listening through the first 20 minutes before you make a judgment. I promise, you will fall in love. I listened to this book in one sitting! Mandy Roth does an amazing job at weaving the multiple characters into a group that you want to get to know. B.J. Harrison does a fabulous job of giving each character their own personality. If you are looking for a fun, sweet read, Don't Stop Bewitching has you covered! I can't wait to read more!

A good portion of this book is a recap of other stories. The actual storyline is rushed.

Another delightful Everlasting story full of great characters and lots of giggles. B. J. Harrison does an amazing job of bringing the characters to life. I can't wait for the next one.

This is a fabulous retreat from the world!

This was a fabulous read, highly entertaining, explosively funny and with enough snark to stand on it's own! Love it!

This book just wasn't great. it wasn't even especially good. No excitement. No real plot. Inane conversations. Maybe it is just a set up for future books?

love the narrative. fun characters. wedding was fast, if you blink you miss it. enjoyed the series