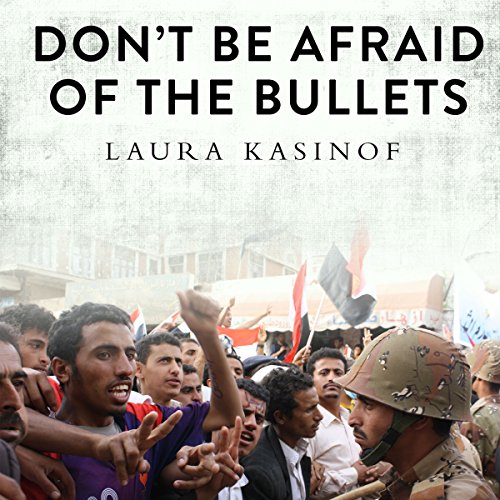 Don't Be Afraid of the Bullets

By: Laura Kasinof
Narrated by: Laurence Bouvard
Try for £0.00

Laura Kasinof studied Arabic in college and moved to Yemen a few years later - after a friend at a late-night party in Washington, DC, recommended the country as a good place to work as a freelance journalist. When she first moved to Sanaa in 2009, she was the only American reporter based in the country. She quickly fell in love with Yemen’s people and culture, in addition to finding herself the star of a local TV soap opera. When antigovernment protests broke out in Yemen, part of the revolts sweeping the Arab world at the time, she contacted the New York Times to see if she could cover the rapidly unfolding events for the newspaper. Laura never planned to be a war correspondent, but found herself in the middle of brutal government attacks on peaceful protesters. As foreign reporters were rounded up and shipped out of the country, Laura managed to elude the authorities but found herself increasingly isolated - and even more determined to report on what she saw. Don’t Be Afraid of the Bullets is a fascinating and important debut by a talented young journalist.

What listeners say about Don't Be Afraid of the Bullets

Don't be afraid of the Bullets

Interesting account of Yemen during conflict and 'change'. Heavily focuses on Sana'a, which is to be expected. Story got a little 'samey' during the latter third. Not the best performance- decent main character, but others were somewhat hammed.

To start with the narrator in my opinion is truly awful. I lived in Yemen for ten years and never once heard anyone refer to the people of the country as YeMENis with the emphasis on the second syllable - cannot believe this was allowed to happen. There are several other words that get similar treatment. I agree with the previous reviewer that the narrator's attempts at acting some Yemeni men's voices is beyond stupid and really detracts from the book.
I really wanted to enjoy this book but kept finding the author's views on life in Yemen patronising and to be honest embarrassing to listen to. Having said all that I persevered (not finished yet) as I enjoy 'reading/listening' to anything about a country that I really love. I lived there from 1978 to 1987. If like me you are interested in reading anything about Yemen, and really there's not much choice, go ahead read this, or listen if you have to, narrator notwithstanding.

Brave, heartfelt, honest.. like so many passions humanitarian correspondents I have met.

Laura concentrates on untangling a human story in an environment where one can easily become jaded and disconnected. She has a clear love of people which is why the door to her seems to have been open more than not.

If only those tasked with finding solutions to the complex tribal rivalries in the region took the time to understand the people then maybe we would not have the continuing tragedy that is Yemen today.

Got tired of the ridiculous comic voice the narrator gives every Yemeni man in this, seems borderline racist really.

Still a very interesting and candid account by this young reporter

This book is insightful and well written, full of depth and detail about Yemeni culture. I found it to be an invaluable resource the understanding context of the current conflict as well as the human dimension. I'm glad she wrote it!