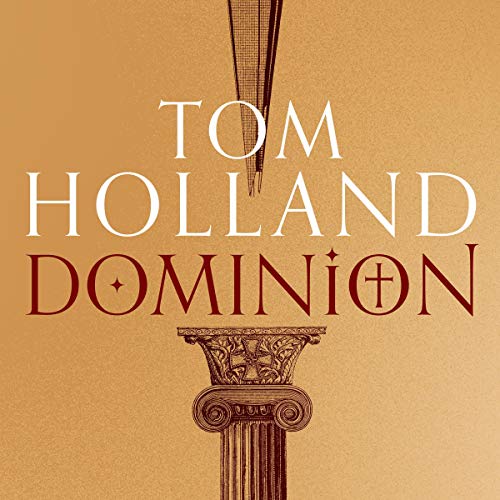 Christianity is the most enduring and influential legacy of the ancient world, and its emergence the single most transformative development in Western history. Even the increasing number in the West today who have abandoned the faith of their forebears, and dismiss all religion as pointless superstition, remain recognisably its heirs. Seen close up, the division between a sceptic and a believer may seem unbridgeable. Widen the focus, though, and Christianity's enduring impact upon the West can be seen in the emergence of much that has traditionally been cast as its nemesis: in science, in secularism and yes, even in atheism.

That is why Dominion places the story of how we came to be what we are, and how we think the way that we do, in the broadest historical context. Ranging in time from the Persian invasion of Greece in 480 BC to the ongoing migration crisis in Europe today, and from Nebuchadnezzar to the Beatles, it explores just what it was that made Christianity so revolutionary and disruptive; how completely it came to saturate the mind-set of Latin Christendom; and why, in a West that has become increasingly doubtful of religion's claims, so many of its instincts remain irredeemably Christian. The aim is twofold: to make the listener appreciate just how novel and uncanny were Christian teachings when they first appeared in the world and to make ourselves, and all that we take for granted, appear similarly strange in consequence. We stand at the end-point of an extraordinary transformation in the understanding of what it is to be human: one that can be fully appreciated only by tracing the arc of its parabola over millennia.

What listeners say about Dominion

A fabulous book turned into a Hammer horror film

DOMINION may well be the most essential and lasting book published in English in 2019 - Tom Holland's scholarship, insight and scope are that big, and that accomplished. I began reading this excellent book in the Kindle version and was enjoying it so much that I decided to indulge in the Audible version too, so I could prolong my immersion uninterrupted as I commute and drive around London. Sadly, regretfully, disappointingly, the audiobook version is in the hands of a man who forgets that his role is to read the text and let the text shine. By the end of chapter one he's so excited he's losing breath, and his "impersonations" of women and God are clumsy and ridiculous enough to turn a grand narrative of historical facts into a Hammer horror film - yes, it's that ridiculous and jarring. The reader's job is to read, not to call attention to himself. The Audible sample you hear first is of Tom Holland himself reading the introduction, and that is a masterful, authoritative and engaging read. But once you get into the book proper, you're in the hands of a narrator who keeps making all the wrong choices and calling attention to himself for all the wrong reasons. His job as the reader is to be anonymous to let the author's voice -not his- take centre stage. But this reader is continuously shouting "Look at me, look at me!" as if he were the reason why this book is of any interest. This excellent book deserves a much more respectful treatment -like all of us listeners do too. But halfway through chapter two, I have already found it unbearable - I want my money back. And now I'll go back to the Kindle version.

mark meadows is a terrible reader

he should read fiction, not non-fiction. constant up and down in town. just read it and don't make it into a performance!

Narrator acts rather than narrates

I really wanted to enjoy this book by Tom Holland which is so well researched and written,but the narrator overacts! Returned book.

I was expecting a book detailing the influence of Christianity on the world. Instead you get Christian loving bias and tilted accounts of history.

"Although I no longer believe in God, I'm still a Christian". and "I take my morals from the Bible" What utter nonsense.

All things fall apart, the centre cannot hold...it often feels today. Our diverse liberal society is ‘tolerant’ and paradoxically judgemental, and does not really seem to understand its own rationale. Tom Holland’s book tells a compelling narrative which weaves together the paradoxes, the highs and the lows of our human story, constantly asking ‘who are we really?’ And he provides a historical, profound and clear answer. But challenges (implicitly) the reader to provide a better explanation.

I wish Tom had read the entire book rather than just the introduction because I found his voice more authentic and effective than Mark Meadow's reading which was punctuated by quick little pants of breath and a gravelly almost contrived baritone that were off-putting. I couldn't listen to more than ten minutes of him because it was so distracting. I'm sad it's been a waste of money as I'd love to hear it all the way through.

Excellent book by a fabulous author, love Tom Holland’s books but dear god the guy reading it needs to calm down, it’s not fiction, it’s not the latest Harry Potter. Tom Holland reads the preface so well, like a historian and then Mark comes in and it’s ruined. So animated that you can’t keep track of what he’s talking about

I am not really equipped to write a review of this book because I have not fully read it. It contains a fundermental and glaring error that must colour the very nature of everything thereafter; I had high hopes of this book, but I am rather disappointed.
Not everyone would agree with my conclusions, so perhaps worth a read.

Should be required reading in schools

Although I would have liked some more commentary along the way I really think this is a fair and much-needed book for our revisionist times.

This has been a through exposition of the sins and merits of Christianity which, through its long and tortuous path has established itself as the moral compass of history. It's time of writing might be the most appropriate as the flow of history is likely to move in a different direction than that of St. Paul's teachings. I hope you read it and become more aware about the influence that the thinking of a weak and good man 2000 years ago has had in our lives.

This review is not concerning the content of the book but rather its adaptation as an audio book.
This seems like a classic case of where the author should have read it. Tom Holland does read the forward of the book and it was just fine. However when Mark Meadows takes over is when things go wrong. There is nothing wrong per se with Meadow's performance, it just doesn't match the style need for a history book. What I'm looking for in an audio history book is a narration that is almost totally transparent, this performance is almost the opposite. When listening to the book rather than hearing the statements as just "matter of fact" instead you end up with the impression that a character from a Shakespearean play has burst into a grand monologue. It is very distracting. Tom please do it yourself next time.

The reader finishes his sentences as if catching his breath. Also, the pauses between sentences are annoyingly long.

This is a really well-researched piece of work by Tom Holland. He has clearly done his homework and knows his history.

If only though the author had read the whole book instead of just the introduction. While the introduction really grabbed me with the way it was read, the rest of the book is read by someone trying desperately to emphasise certain points but coming off as dead boring. I found myself constantly tuning out while listening, which is disappointing for such a fascinating topic. Someone needs to tell the reader of the book that it’s not a novel; it’s history and therefore needs to be read differently.

I would still recommend the book for its great content, but perhaps the paper version would hold my attention a lot more.

Eye opening and decently thorough considering the scope of history this book is covering. definitely recommend.

Interesting argument on the history of Secularism

It's an argument that many people both conservative and liberal I am sure will both find aspects that both clash and reflect their own worldview. An outlook both snowflakey and problematic. In this way it is in itself a reflection that the current culture war in the west is a civil war that stretches back to early Christendom. A civil war between people who fundamentally believe in the power of love and mercy.

This one not his best

I have read it listened to every book written by Tom Holland, truly a great historian and I have never been disappointed but this one is a bit too rambling, a bit too anecdotal and well, too LONG. Many of its assertions are interesting but remain assertions, many connections inspired but not demonstrated. The last three hours or so the 20th century truly taxed my patience, hopping here and there while endlessly pontificating...I wish I could like it better but I just can’t. Once it left the first Millenium A.D it just lost its way.

bad. cheery picked examples to further the red line of christianity's bedrock values made a fundation of the west. Certainly a reasonable argument, this book does not challenge but seek only to proclaim. Spanning the scope of centuries, dynastic politics, war, plauge etc seems to all be whims of man when a random pope finally says no more sex for priests or challenge a monarch to whom appoints biachops. Anecdotal all the way.