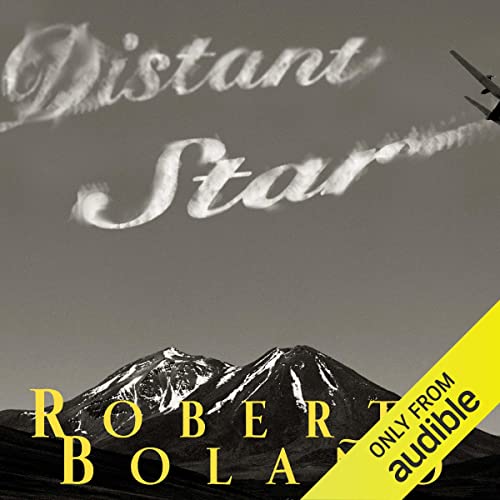 By: Roberto Bolano
Narrated by: Walter Krochmal
Try for £0.00

A chilling novel about the nightmare of a corrupt and brutal dictatorship.

The star of Roberto Bolano's hair-raising novel Distant Star is Alberto Ruiz-Tagle, an air force pilot who exploits the 1973 coup to launch his own version of the New Chilean Poetry, a multimedia enterprise involving sky-writing, poetry, torture, and photo exhibitions.

For our unnamed narrator, who first encounters this "star" in a college poetry workshop, Ruiz-Tagle becomes the silent hand behind every evil act in the darkness of Pinochet's regime. The narrator, unable to stop himself, tries to track Ruiz-Tagle down, and sees signs of his activity over and over again. A corrosive, mocking humor sparkles within Bolano's darkest visions of Chile under Pinochet. In Bolano's world there's a big graveyard and there's a big graveyard laugh. (He once described his novel By Night in Chile as "a tale of terror, a situation comedy, and a combination pastoral-gothic novel.")

Many Chilean authors have written about the "bloody events of the early Pinochet years, the abductions and murders," Richard Eder commented in The New York Times: "None has done it in so dark and glittering a fashion as Roberto Bolano."

What listeners say about Distant Star

This book is a rough read, unless you're into poetry don't read it

What was one of the most memorable moments of Distant Star?

He got the voices correct and the translation was good, I preferred this to the Spanish version.

Could you see Distant Star being made into a movie or a TV series? Who should the stars be?

Like poetry before you read this!! And know the poets of Russian history!! WW1!!

This is the second book by Bolaño that I have read. I read By Night in Chile. Since that work was more a reflection or meditation than a novel, I read the Audible Plot Summary and thought this would be more of a thriller or murder mystery taking place in Post-Allende Chile. The setting was correct but the plot was too long and drawn out to thrill.

Bolaño writes for a Chilean audience and maybe only an audience of Chilean poets. In any case, his work is not aimed at me and that’s fine but Distant Star is my last Bolaño book. No mas!

Easy to miss important details if carrying out other tasks while listening. Otherwise the story is layered and well written.