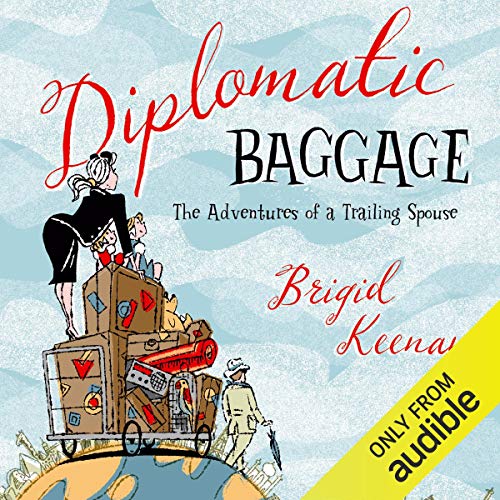 By: Brigid Keenan
Narrated by: Jane Copland
Try for £0.00

When Sunday Times fashion journalist Brigid Keenan married the love of her life in the late '60s, little idea did she have of the roller-coaster journey they would make around the world together - with most things going horribly awry while being obliged to keep the straightest faces and put their best feet forward. For he was a diplomat - and Brigid found herself the smiling face of the European Union in locales ranging from Kazakhstan to Trinidad. Finding herself miserable for the first time in a career into which many would have long ago thrown the towel, she found herself asking (during a farewell party for the Papal Nuncio): was it worth it?

As this stream of it-really-happened-to-me stories shows, it most certainly was - if only for our vicarious bewilderment at how exactly you throw a buffet dinner during a public mourning period in Syria, remain viable as a fashion journalist when taste-wise you are three seasons out of it and geographically a world away, make people believe that there are actually terrible things going on in paradise, be a good mother and save some of the finest architecture in Damascus and Brussels from demolition - seemingly all simultaneously.

"Brigid writes like a dream.... Fabulous." (Joanna Lumley)
"Brigid Keenan vividly evokes both the oddities and loneliness, even today, of being the 'other half' of a diplomat. Immediate and intimate, poignant and very funny; it is as if she is talking to the reader. Her eagle-eyed observation of human behaviour and far flung experiences made me laugh out loud." (Josceline Dimbleby)
"A wonderful picaresque take on the travails of expat life, and an absolutely delicious read.... There are not many books that have actually made me cry from laughing, but this is one of them." (Katie Hickman, Sunday Times)
"Life is what you make of it - you can't just sit there and let it happen to you - you've got to grab opportunities with both hands, or you risk boredom at least, depression and deathbed regrets at worst. Women have not been raised to understand the importance of this. Brigid Keenan rams the message home with hilarity. This is an important book, written by a very funny writer." (Shirley Conran)

What listeners say about Diplomatic Baggage

A great, personal, funny, sometimes annoying, but enjoyable and frank take on a diplomatic wife's tale Thanks

I love this book. It’s the second reading for me and enjoyed looking up the places mentioned as we went along. Thank you Brigid. Wonderful.