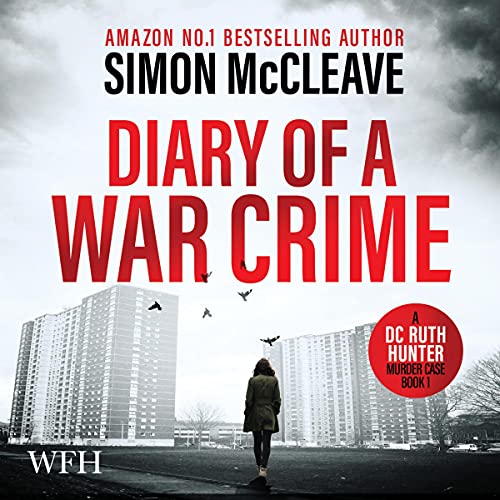 Diary of a War Crime

By: Simon McCleave
Narrated by: Rachel Atkins
Try for £0.00

Diary of a War Crime is the first book in the DI Ruth Hunter crime prequel series. If you like chilling police procedurals, true-to-life characters and psychological twists, then you’ll love Simon McCleave’s addictive thrill ride.

London, 1997. A series of baffling murders. A web of political corruption. DC Ruth Hunter thinks she has the brutal killer in her sights, but there's one problem. He’s a Serbian War criminal who died five years earlier and lies buried in Bosnia.

When Detective Constable Ruth Hunter is called to the death of a pensioner in South London, she becomes convinced that it is not as routine as it first appeared. There are links to the death of another pensioner which suggest a link back to the Bosnian War of the early 1990s.

With the investigation thwarted at every turn, Ruth soon realises she may have stumbled upon a political cover-up in the lead up to the 1997 General Election. As she races against the clock, Ruth believes the man she is tracking is a Serbian War criminal who supposedly died in Bosnia five years earlier. Can Ruth find the notorious 'Butcher of Strigova' before he murders again to cover his tracks?

Born in South London, Simon McCleave was a script editor at the BBC before working as a story analyst in Los Angeles. He worked on films such as The Full Monty and the BBC crime drama Between the Lines.

Simon then became a script writer for television and film. He wrote on series such as Silent Witness, Murder in Suburbia, Teachers, Attachments, The Bill, EastEnders and many more.

Simon is now a best-selling crime novelist. He has had over 300,000 sales and downloads of his DI Ruth Hunter crime thriller series. Simon has just signed a deal to turn the books into a television series.

What listeners say about Diary of a War Crime

Thoroughly enjoyed - took me back to Blair coming into power, nostalgic. Enjoyable story. Would recommend as gripping and female leads.

Very easy listen but the story seemed very thin. Don't know if I recognise our heroine of later books in this story line.

What a different book and I loved it

I am a big lover of female detective uk books and it took me awhile to get into it , but I soon did and lived the story line . Now to start the next book in the series .
Brilliant narration.

This was my first book by this author and I’m glad he has written several more.

Apparently this is a prequel series to other books so I’m glad I read this first. DC Ruth Hunter (although she’s referred to as DI Hunter a time or two) and her partner Lucy find themselves in the midst of a potential war crime from the war in Bosnia. The story seemed quite plausible and it made for interesting reading, or listening in my case.

The narration was well done. I look forward to finding out more about Ruth’s career.