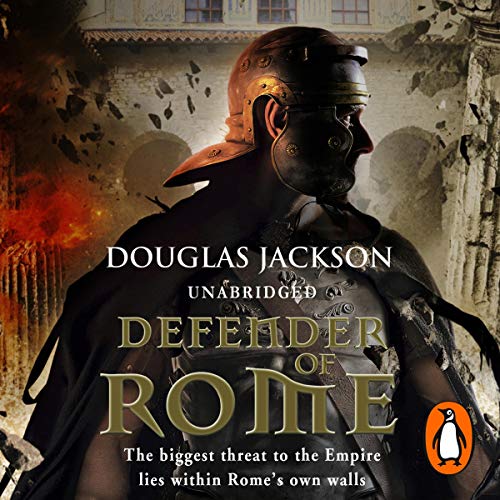 By: Douglas Jackson
Narrated by: Cornelius Garrett
Try for £0.00

Gaius Valerius Verrens returns to Rome from the successful campaign against Boudicca in Britain. Now hailed a ‘Hero of Rome’, Valerius is not the man he once was – scarred both physically and emotionally by the battles he has fought, his sister is mortally ill, his father in self-imposed exile. And neither is Rome the same city as the one he left. The Emperor Nero grows increasingly paranoid. Those who seek power for themselves whisper darkly in the emperor’s ears. They speak of a new threat, one found within the walls of Rome itself.

A new religious sect, the followers of Christus, deny Nero’s divinity and are rumoured to be spreading sedition. Nero calls on his ‘Hero of Rome’ to become a ‘Defender of Rome’, to seek out this rebel sect, to capture their leader, a man known as Petrus. Failure would be to forfeit his life, and the lives of 20,000 Judaeans living in Rome. But as Valerius begins his search, a quest which will take him to the edge of the empire, he will discover that success may cost him nearly as much as failure.

What listeners say about Defender of Rome

Another great story from Douglas Jackson

I loved this book. It was very well read by Cornelius Garrett, he was clear, expressive and kept the dramatic tension of the story just to the right level throughout the novel.

Where does Defender of Rome rank among all the audiobooks you’ve listened to so far?

One of the best historical fiction books i have listened to this year, if not all time. Douglas Jackson brings ancient Rome to life. Stunning attention to detail, and the narration by Cornelius Garrett just adds to the atmosphere. After listening to the first in the series (Hero of Rome), this was an automatic must have listen.

Have you listened to any of Cornelius Garrett’s other performances? How does this one compare?

I have listened to Hero of Rome, and this was defiantly next on the list. Well written, and well read.

If you like Historical fiction, and have listened to any of the "Vespasian" series by Robert Fabbri then this book will not disappoint.

Great writer but the story is hurried

A great novel. However the biggest let down in this book is that it feels a bit hurried. Looking at Simon Scarrow or Bernard Cornwell in comparison you see a big difference in taking the time to set a scene and developing a story. It feels rushed, even though there is a lot of room for character development. Hopefully this will change later on in the series

Haven't Finished it, tried many times

This book is not as good as the 1st of the series, or at least so far. I've listened to about 2-3 hours of this story & the flow, action, & back story is just not as entertaining as 'Hero of Rome.' The narrator is the same so that isn't the problem & its interesting to see how he has dealt with what happened in 'Hero.' I will try to give it another chance at some point soon but I moved onto the Roman Legion Novels with Macro & Cato.

I find these books are very good but not quite in the same league as the Roman Legion books... But, Ludlow is still a great author