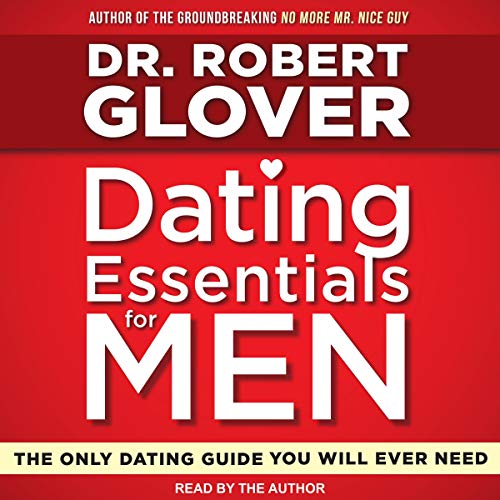 For most of his life, Dr. Glover, the author of the groundbreaking No More Mr. Nice Guy, was what he calls a "bad dater." He assumed the women he wanted were not interested in him. He believed that women disliked sex and thought men who wanted sex were bad. When he did get a girlfriend by practicing what he calls "Nice Guy Seduction," he typically hung on way too long for fear of having to enter the dating world all over again. But this all changed when he got divorced in his mid-forties. Dr. Glover decided to approach dating as if it were a scientific experiment. To his surprise, he quickly found that talking with women, getting numbers, and getting laid was nowhere as difficult as he had thought. He often wondered what planet he had landed on.

Dating Essentials for Men was born of this experiment. Dr. Glover has since taught thousands of men how to interact confidently with women and find the love and sex they have been seeking.

Are you ready to let go of the games, the tricks, the seduction, the pickup, the negs, the cocky-funny routines, the buying women drinks, the volunteering to help their sister move? Do you want to learn how to create the kind of authentic attraction that naturally brings women to you? If so, Dating Essentials for Men is the only dating guide you will ever need.

What listeners say about Dating Essentials for Men

he tells you nothing of the dire consequences of being shackled to a woman that you have no desire to have sex with, or the destructive costs of the impending divorce that is sure to follow.

Robert Glover uses his name to sell this

His first book "No more Mr nice guy" is a modern classic, probably the best non fiction book I've ever read. This book is not. it's aimed at beginners. if you're quite lost and have dated less than 2 ladies, this book could help you. it's well read but the content was not for me.

if you need concise information on dating and getting the dream girl well read on..

Simple. Practical and extremely insightful advice any man can use as soon as they drop this book to improve their success with women.

However, I believe the advise in this book will do much more than improve my dating and love life, it will improve my overall quality of life... By helping me have much more fun with the people around me.

And it will greatly enhance the quality and depth of my communication. I love part where he talks about leading a more engaging conversation. For me, that'll change a lot in my life starting today! Thanks Dr. Glover!

A raw hard hitting factual insight into dating from someone that has been through the rigors of relationships, made the mistakes and learned from them. Changed my life off the bat, not only for dating, this book is a game changer. There are so many essential life facts in this book that I will read/listen to it a second time through.

Another great book from Dr Glover. Practical and useful. Mainly a self help for improving oneself with the stuff about women being the icing on the cake. No BS tips or tricks. Definitely not a pick up book.

If you have high anxiety around women you find attractive, this is essential listening! Excellent content that I will listen to many times over. Brilliant narration too. I also Listened to No More Mr Nice Guy, which is an excellent audiobook, but found this one more applicable to me.

Dr Robert Glover is so under appreciated!

I loved this book and will come back to this and No More Mr Nice Guy as for me both books are about growing yourself as a man.

Highly recommended as this is not about pick up, it's about learning into your masculinity, vulnerability and taking responsibility for your dating life.

Well read and great advice, I can't wait to put it into practice. Definitely worth taking your time with.

I have read numerous books on dating and being successful with women. this book is decent. it has some really good info in it. I've personally experienced many of the things he discusses in the book. I would give it overall 4 stars. I felt he He talked a bit too much about self limiting beliefs. Taking risks is part of life but if you know how to read a woman it greatly reduces your risks of rejection with women. You need to know how to read body language with women. If you can read body language that will greatly reduce your rejection. You can't just tell someone don't be scared of rejection. that's utter nonsense. everyone fears rejection. that is where body language comes in. that is why he is preaching no attachment to outcomes in this book though because he knows rejection hurts. rejection and defeat are not good for self esteem. it actually lowers your testosterone, that's how powerful it is. sure you can throw out small tests to see if women are interested but if you pay attention to body language you don't always have to test. you can normally tell who is interested just by body language. That's the big part that is missing from this book.

Another great book by Dr. Glover.

Combine this book with his other book, "No more Mr. Nice Guy" and your life will be the one you want in no time!

EXCELLENT audio book. After reading Dr. Glover's first book "No More Mr. Nice Guy" I thought it would be a good exercise to listen to Dating Essentials for Men. Although I am currently in a committed relationship many of the principles in this book really do hold true based on my own empirical experience. What I like most about it is the no BS, no games and keeping it real approach espoused by Dr.Glover. I highly recommend this audio book.

One more aspect of self improvement.

I’m a middle aged man returning to the dating arena. This book has helped me to recognize what I’ve done right and where I’ve fallen short. It has helped me realize what I really want in a relationship and put me on a path to find A Really Great Woman.
Delivery is smooth and encouraging. Sequence is concise and logical. I highly recommend this book.

THIS BOOK HELPS YOU IN DATING THE GIRLS YOU WANT IN EFFECTIVE WAY..

This book explains why your Game and pick up do not work.

This book also Explain What Women want from a man. What makes a man attractive to a man..

Must read for any guy who's dating

this book was phenomenal. I can't think Robert Glover enough for challenging me in this book. within a couple days except in the challenge I went from very nervous approaching women to looking forward to the challenges. this book is a game changer when it comes to dating.

Loved it, brilliant. Everything you need to become a good dater. Very simple and straight to the point.

I applied what it said and my relationship was ruined. this book is not accurate.