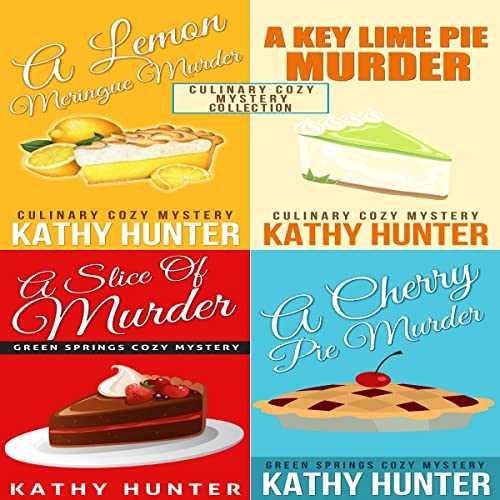 By: Kathy Hunter
Narrated by: Giselle Lumas
Try for £0.00

Get all four books in this fun culinary cozy mystery collection!

Mary Ann is hosting a party in the heart of a small town called Green Springs, in New York State at her newly opened pie shop in celebration of a business achievement and serving her famous lemon meringue pies. However, the party turns sour when one of her guests (a friend of a friend she invited) falls dead. Mary Ann is one of the suspects as the victim was poisoned - possibly by one of her pies.

In an effort to clear her name, Mary puts on her detective hat and sets out to uncover who murdered her guest and why?

Alice is hosting an opening party at her new pie shop and serving her most famous key lime pies. However, everything turns bad when a guest is killed and the suspected murder weapon is actually one of Alice's pies through poisoning. After some investigating, she finds out that the victim who was poisoned is actually the wrong person, and Alice was the intended victim! Alice goes on the hunt to identify the killer and prevent any additional deaths - including her own.

Mary Ann enters a local baking competition in her local town of Green Springs, but has tough competition against her rival baker Sally, from Sally's Cakes. When Mary Ann gets into the final against Sally, one judge falls dead, but what's worst of all; he was the one tasting Mary Ann's cakes!

it was ok. Fun, quick little cozy whodunnit. Sped up to 1.5x and it went very quick and a good listen for a daytime drive.

I was given this free review copy at my request and have voluntarily left this review.
Good story and narration

I'm not sure about the cozy part, because these villains were ruthless, greedy and unremorseful
killers.. It was interesting, but very selfish individuals. I voluntarily listened to a free copy of this and am giving an honest review. The narrator was good.

The stories were interesting.
The narrator was awful.
Will make sure that I never buy anything that this woman narrates!!

Overall was good, narration and plot, with a good characters. Have read others by author that I enjoyed. Good selection and nice to have box set