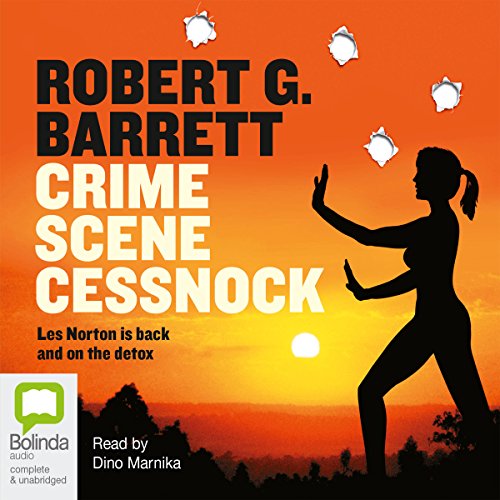 In Crime Scene Cessnock, one of the many Les Norton novels written by the late Robert G. Barrett and performed by Dino Marnika, Mr. Marnika brings his manly, swaggering Australian accent to another Norton misadventure. Les Norton is that ever-popular character type: swarthy, good-humored, and trouble-prone. Think an Australian Jimmy Buffett crossed with James Bond.

This time out, Norton’s evading a hellish payback by posing as a film director at a swanky hotel outside Sydney, Australia. Dead bodies, hot women, Aussie slang, quick jabs at popular social clichés...it’s everything you’ve come to expect since Les Norton first appeared in 1984’s You Wouldn’t Be Dead for Quids. This is an easy and pleasurable romp for any would-be detective with a taste for quick sex and hard liquor.

Robert G. Barrett's latest Les Norton adventure, Crime Scene Cessnock, set in New South Wales's beautiful Pokolbin Valley, is a whodunnit with a difference, and proves once again why Barrett is, to quote The Australian newspaper, 'the king of popular fiction'.

Les is back and on the detox.

All it took was a summer's day and a flat tire on his push-bike, and Les is out on bail and on the run from a gun-happy street gang intent on a drive-by. So, with Warren's help, Les Norton defendant, becomes Len Gordon film director, safely ensconced at the ultra-swish Opal Springs Health Resort till Eddie can sort things out back in Sydney.

Unfortunately, the first thing Les finds on arrival is motivational guru Alexander Holden dead at the front gate. Before he knows it, Les is up to his neck in a land of a thousand acronyms, fighting off steroid-happy body builders, sex-scrazed socialites, violent greyhound owners and, worst of all, caffeine withdrawals.