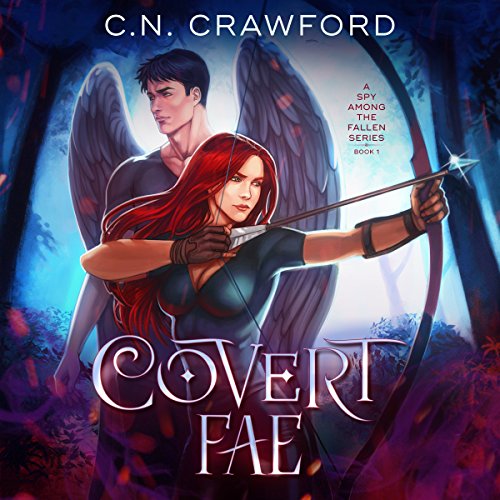 Covert Fae: A Demons of Fire and Night Novel

By: C.N. Crawford
Narrated by: Laurel Schroeder
Try for £0.00

To live, I must tempt the angels of death.

It’s been 18 months since the angels of the apocalypse ripped our world apart. Before, I was a burlesque dancer, decked in sequins and feathers at the hippest clubs. Now, I live in an abandoned hospital in East London, scavenging for scraps.

At least, until I get the chance to fight back against the disturbingly seductive angels. In fact, I’m going undercover as a spy in their castle. I have two goals: learn their weaknesses, and find my missing sister.

Problem is, I have to pretend to be someone I’m not: an alluring succubus. If one of the angels discovers who I really am, the fate of the world could lie in ruins.

I can’t let that happen. The angels tried to destroy my world, and it’s my turn to ravage theirs.

What listeners say about Covert Fae: A Demons of Fire and Night Novel

If you could sum up Covert Fae: A Demons of Fire and Night Novel in three words, what would they be?

CN Crawford does a great job with setting up a visual image of day to day life for Ruby. I felt like I was with Ruby and experiencing her struggle with life after the Great Nightmare. Ruby's sacrifice for her family and friends seems to be a defining characteristic that places her in dangerous situations. Ruby is strong and can take care of herself. She walked in the lion's den without an escape plan.

This book left me wondering what will happen next for Ruby and Adonis. I have lots of questions about Adonis and the role Ruby plays in this world.

What was one of the most memorable moments of Covert Fae: A Demons of Fire and Night Novel?

Laurel always does a good job!.

I feel really bad but I couldn't finish listening to the narrator. Her voice was just a little to bland for me. Will actually read the book. What I heard so far I liked.

Another great book by C.N. Crawford

I love every single story Crawford have! But the voice in this one OML! Was cringy! Way to cartoonist I really didn’t like it. Was hard to me to pay attention. The story I amazing!

Definitely recommend listening to this book ! The narrator did an awesome job telling the story

this is the first negative comment I have sent. The story is puerile, but the killer is the choppy, blocky, poorly inflected narration. T he closest simile that comes to mind is that phrases are delivered like bullets from a machine gun, much to the detriment of the thin story line. S orry, I expected far more.