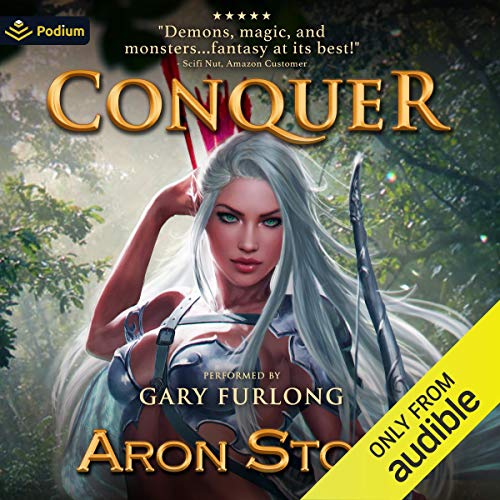 By: Aron Stone
Narrated by: Gary Furlong
Try for £0.00

Win the annual Conquer tournament and earn wealth and power without measure. Lose and you're dead. No pressure.

The game is Conquer, played for the king's amusement by the most notorious criminals and ambitious lordlings.

Aron Stone, street rat turned commander of the king's First Legion, doesn't have patience for pointless games. But when a series of unfortunate events earns him the king's ire, he is forced to participate.

Armed with a ragtag troop of dwarves, a beautiful but short-tempered sorceress, and a doting mistress, Aron must grow his forces, locate valuable weapons and magical artifacts, and win the day. Only complete victory will allow him to escape the arena and get his revenge.

Warning: This audiobook has medieval cursing including shite and arse, sex with tavern wenches, drunken dwarves, creatures that want to eat your head off, sex with multiple women on multiple occasions, dark-magic-wielding magicians, and more sex with various races, including faeries, elves, and others of the author's invention. Not intended for listeners under the age of 18.

What listeners say about Conquer

A bit too graphic sex scenes

Coomers delight but there are but under five occasions of it, so far to little for the Coomers while being a bit much for normals leaves everyone wishing for revisions.

Author obviously sharing his fantasy. Not that much adventure in this. Want to return these.

Aron is a thot

I loved the concept of the story but the authors tendency to go into so much detail regarding the very frequent sex scenes I felt unnecessary.....it didn't add to the story and if anything took something away from the integrity of the plot...I'm not a prude in any way but sometimes 'little is more'.....

I really enjoyed listening to this book. Good Stroy, good performance and overall a really good listen. I look forward to the second.

Really bro. Named the main character after yourself. Then include a scene with him and the kings harem followed by a smash cut to them leaving bow legged and satisfied.

It feels like it was written by a 16 year old.

Most of the sex scenes felt random. The MC is basically this big manly man that gets all the women inside a predictable story. I'm pretty sure most readers here aren't really invested in the characters and I'm wondering why this series is getting more than 3 stars

Better then average but can't recommend

Many books in this genre the MC is hard to like. They are either naive on the ways of women or a total A**. In this book however the MC is self confident with the ability to empathize. One of my main issues with the MC is his inability to do for himself. He puts all above himself which is just not realistic, especially given the situation he finds himself in. There has to be a balance! However when so many depends on you their needs to be a shift. Chances are if the MC dies or is unsuccessful in his mission many will die if not the extermination of entire species. The other issue I have with the MC is how long he uses his gnorance on the game he is forced to play on actually playing the game. By the end of this book he never really starts playing.

With all that said sadly I can't recommend this series since there is no series as of yet. This is book one but almost 2.5 years later there still is no book two. Even if this becomes a series 2+ years in-between books makes it's a No for me. Which is sad given I believe it's one of the more realistic written books in the genre.

I Feel What I Am Supposed To

I really like this book because the author did a great job with the development of the protagonist and didn't rush it but also didn't make it boring. and even though this falls in the harem trope it doesn't not fail to get you in the feels for each one. I was saddened by the fairies plight. This book does a good job at mixing gamelit, midevil, and fantasy all into one.

The story is a classic RPG style harem. The main protagonist is inhumanly noble and good. He is further made less interesting because he is already highly skilled and has nowhere to grow as a character. By chance he manages to seduce or win over any female character all of whom are also willing to share him sexually with one another.

The only thing that makes this particular story a bit different is that the setting is in a fantasy world to begin with. Other than the performance by Gary Furlong there is little to recommend.

You can’t tell me after listening to this you want more. Amazing story, good plot line, and nice world built building loved it. already looking forward for the next book in this series.

non-stop action excellent book probably the only second book that I've listened to once and turn right back around and listen to a second time. Can't wait for the second and many others to follow.

good writing great detail and the love scenes made me almost down right blush! .....just wow

Good enough that I'll get the next. I liked that the author didn't jump the MC right into the game. Took time to develop him. Appreciated the lack of a solid cliffhanger.

The beginning was a lot slower than I like, but once it got going, it was like one of the boulders rolling down the hill. This is how I'd picture the Dark Ages being if humanity had magic and the other races, we're a destructive lot, and the knight is a rare character, even nowadays.