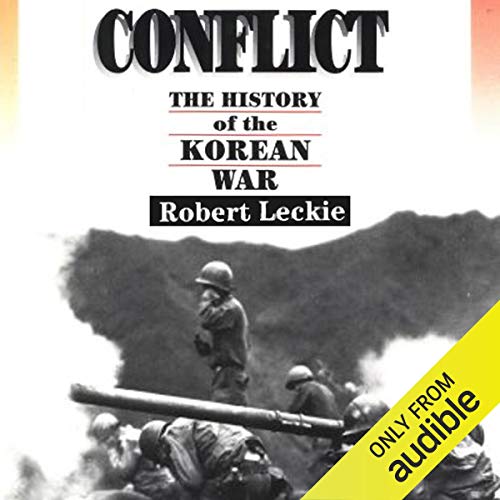 By: Robert Leckie
Narrated by: David Rapkin
Try for £0.00

In June 1950 Communist forces poured across the 38th Parallel (the arbitrary, militarily indefensible line of latitude separating the Communist North from the independent Republic of Korea) to unite the country by force. Three bloody, bitter years of fighting ensued during which the seesawing fortunes of this frustrating war thwarted North Korea's ambitions while treating the ill-equipped, overconfident UN peacekeeping forces, mostly Americans, no less harshly. Conflict examines the war in all its military, political, and human dimensions: the battles at Pusan Perimeter, at Inchon, at Chosin Reservoir, at Heartbreak Ridge; significant figures like Syngman Rhee, Kim Il Sung, Ridgway, MacArthur, and Truman; controversies like MacArthur's dismissal, the difficulties of P.O.W. exchanges, and charges of brainwashing and germ warfare; as well as penetrating analyses of the performance of the American soldier, and the war's effect on the U.S. military and our national psyche. As such, Conflict stands as an unsurpassed, vivid contribution to history.

What listeners say about Conflict

Book has some glaring factual errors and the author's prejudice, typical of former Marines, toward USMC actions is obvious.

This book was written in the early 1960s so it was a bit dated, however it was very well written and provides the reader with a very detailed, chronological account of the Korean War. I have read a few books on the conflict but I still learned a great deal from this book. It moves fast at times and it’s a bit of a challenge for those without a military background, but yet it is very informative and an enjoyable read. The narrator did a fine job as well. I am happy I purchased this book.

Very good account of the Korean War. I think Americans should educate ourselves to day and see what our history says what happened during the early 1950's. This will give the reader a good idea what the North Koreans are like when anyone tries to negotiate with them. You can't till they are beaten into submission.

The performance was a average and, occasionally, a little distracting.