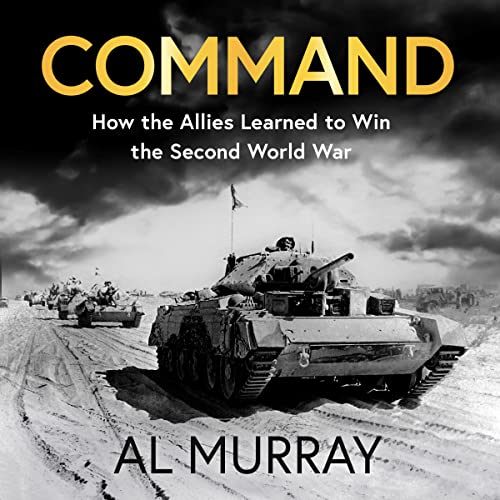 A unique analysis of the greatest commanders who helped the allies win the Second World War, written by one of the UK's best loved comedians and commentators. He also loves history.

Al Murray's passion for military history and the Second World War in particular has always run parallel with his comedy and was brought to the fore with several acclaimed and award-winning television shows and the recent huge success of his podcast We Have Ways of Making You Talk which he hosts with fellow bestselling military author James Holland. In his first serious narrative book, Command showcases Al Murray's passion for this pivotal period in the twentieth century, as he writes an engaging, entertaining and sharp analysis of the key allied military leaders in the conflict.

Command highlights the performance and careers of some of the leading protagonists who commanded armies, as well as the lesser-known officers who led divisions, regiments and even battalions for the British, Commonwealth and United States of American armies. By showcasing each combat commander across every major theatre of operations the allies fought in, Murray tells the story of how the Western Allies rebounded from early shocking defeats (Dunkirk and Pearl Harbor) to then victories (El Alamein and D-Day) in its efforts to defeat the Axis forces of Nazi Germany and Japan, and what that tells us about the characters and the challenges that faced them. Command is the book for all fans of Second World War History who appreciate a true enthusiast of the genre with something new and compelling to say.

"Al Murray's new book proves, if anyone still feels the need to question it, that he is a major historian in his own right. Command is everything popular history should be: authoritative, full of deep wisdom and knowledge, genuinely fresh and original in approach and content and both compelling and entertainingly written. Skilfully blending the famous names with those lesser known, he examines each in a completely fresh light, focussing on differing aspects that collectively offer a satisfyingly comprehensive whole that takes the reader on a journey across a wide range of landscapes, theatres and battles. It is an utter joy to read from start to finish." (James Holland)

What listeners say about Command

it wasnt a book about how he thought the allies won the war through command, rather a rant of stories from a pub landlord or regular that wandered through to conclude with a trite statement about the true sacrifices of war.

enjoyable but not very educational

I am afflicted, as are so many, with a deep fascination into the Second World War. This book is a superb précis of the different challenges and styles of leadership in that conflict. If you know nothing of the war, this book will give you a good introduction. If you’re already knowledgable, then this book will most probably give you a different slant on some well known leaders and an introduction to some lesser known.

You could also do worse than listen to Murray and Holland’s excellent podcast on the theme, We Have Ways of Making You Talk.

As a fan of history and especially WW2 I loved listening to this book by Al Murray.

Hearing about the different Commanders and the way they commanded always brilliant and full of facts.

Al's take on individuals and his little bits he adds are brilliant.

An unexpected joy of a book. Entertaining and fast paced, it takes an unusual approach that, broadly speaking, pays of. With each chapter telling a different story, it’s a lively listen. Al Murray as reader also adds to the experience. Highly recommended.

I never cease to enjoy the audiobooks narrated by Al Murray. It feels like I’m listening to a mate, telling me stories of daring do. What a credit, and a tribute to the men and women represented in this book.

A story of people

A story of Allied army officers from the top to the bottom of WW2. Al tells their story with both sensitivity and an eye for detail. Don’t be put off by his comedian “day job”, this is as good a history as I have read covering it from the perspectives of those who got it done.

Learnt a lot about the people giving the orders. Engaging delivery makes this an easy and compelling listen.

A very good listen, well researched, interesting, often funny and expertly read by the author whose voice is perfect for narration.
A must for any war history buff or fan of his ‘we have ways’ podcasts with James Holland.