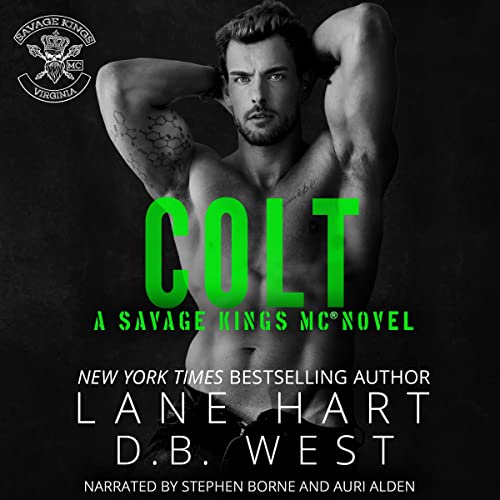 Colt Fulton is a selfish womanizer who doesn’t care about anyone but himself.

He’s also starting his membership with the Savage Kings MC on shaky ground after he carelessly loses his leather cut while hooking up with one of the many women who come and go through his life.

The Savage Kings are rightly furious when one of their cuts turns up in South Carolina being worn by a teenager pretending to be a member of the club to get girls.

Colt, however, doesn’t think the kid should be punished for his efforts. In fact, after he realizes that Jordan’s been through some of the same torments of Colt’s past, he feels compelled to help him get his life straight. That’s why Colt offers to let Jordan be his prospect despite his mother’s objections.

Josie Billing’s 18-year-old son Jordan is struggling to deal with his recent trauma caused by her abusive ex-husband. The last thing Jordan needs is to be exposed to the bad influence of some random smooth-talking biker from a motorcycle gang. A biker who is determined to take her son to Virginia and is relentless about trying to get her in his bed.

Colt never gets turned down by women. So, when Josie doesn’t fall for any of his usual tricks, he becomes obsessed with trying to win her over. The eight-year age difference doesn’t bother him like it apparently bothers her, however. In fact, he’s starting to think the older woman may be the one to finally curb his wandering eye if she would just give him a chance.

Unfortunately, Colt likes to gamble big without thinking about the consequences of his actions.

When Josie finally gives in to him, Colt will have to deal with the fallout and risk losing both her and his prospect.

What listeners say about Colt

Here we're back with The Fulton Brothers in Rockton Virgina when Colt Fulton HAS to go to Myrtle Beach Brach of The Savage Kings South Carolina to retrieve His Cut which was taken during the last get together Beach Party, where a young lad Jordan took it to try & seduce some Girls, but Colt gets the full mouthful from His Mother Josie Billingham tells Colt what she thinks about Bikers.
But what neither of Them were expecting was THAT ATTRACTION & CONNECTION is one that neither have had even though Josie has BEEN married 4 times prior to ALL OLDER Men even to Jordan's Father when she was 17, but SHE'S NEVER BEEN WITH A YOUNGER MAN BEFORE.
But Colt's & Hers changes for The time She NEARLY was Lost...
What a beautiful Love Story & a Heart Breaking one When Colt Opens up about His Young Life & what he was able to get Their Uncle The sherif to Give a leinett sentence......