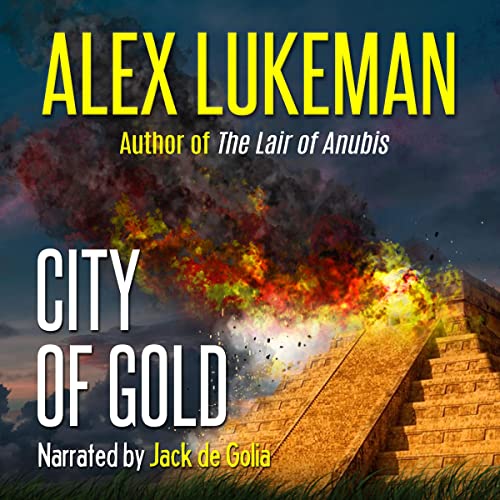 Cut off from government support, the Project has gone private as the Harker Group, specializing in high order security. Business has been slow, but when a wealthy British explorer wants to hire her services, Director Elizabeth Harker isn't sure she wants the job.

Sir Jeffrey Livingston has an ancient map leading to the lost city of Paititi, where a legendary treasure of gold was hidden during the Spanish conquest of the Inca Empire. The ruins of the city are somewhere deep in the unexplored Amazon jungle. Livingston is mounting an expedition to go after the gold. He wants the Project team to provide security.

Simple enough, except word of the map and expedition has leaked. Communist rebels want to get their hands on the gold and use it to fan the flames of revolution. That can't be allowed to happen. Harker agrees to take Livingston on as a client.

The team heads to Peru and sets off into the Amazon. Soon they are far from civilization, where there's no backup if something goes wrong. Enemies are tracking them. There's a traitor in their midst. The deadly creatures of the rain forest are everywhere, death only a careless step away. Even if they manage to find the lost city, they'll need all their skills to get out alive.

The Project team has been in some tough spots before, but nothing has prepared them for this...

What listeners say about City of Gold

I have been a fan of The Project Series since book 1. Alex Lukeman and Jack DeGolia never disappoint! I love the cast of characters and the way DeGolia brings them to life. The fact that many of key players are fearless, intelligent, strong women, who are vital to the storyline don’t exist just to be “rescued” by a male character, also makes this my favorite series. Thank you Alex and Jack!!

City of Gold Book of Gold

All of our friends are back and providing security for a uptight guy (Sir Jeffery) trying to find lost gold in the Peruvian rain forest. But first they spike the interest of the local terrorist group and what was supposed to be a babysitting job turns into a fight like they have not had before.

This is another wonderful book by Alex Lukeman and I hope he keeps putting out a new project book every now and again. This book is full of action and suspense that will keep you on the edge of your seat. If you get audios this one, narrated by Jack de Golia, is one not to be missed as his voices have brought these characters to life and tosses you right into the story with Nick and the gang. Mr. de Golia makes you feel a part of the group, and part of their family, even Burps.

A narrow escape from death by the Project Team

I've been following the Project Team from the very beginning, and Alex does a great job of crafting an exciting and realistic ride with the City of Gold. Jack does his usual outstanding job of bringing all the characters to life! I look forward to each new addition to the adventures of the Project, and this was thrilling, as usual. The only issue I had was the story seems a bit hurried toward the end, and the finale definitely left the impression that Nick and the gang are ready to retire...I sincerely hope this isn't the case.