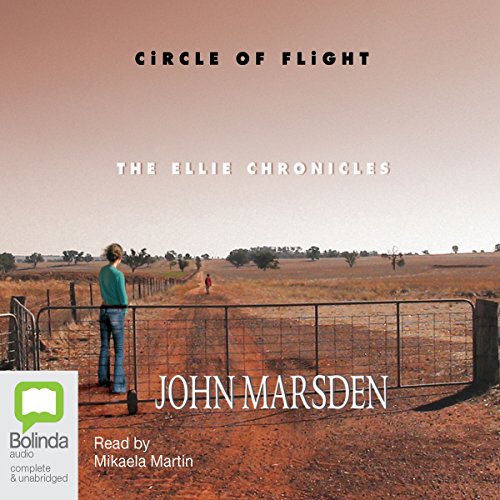 By: John Marsden
Narrated by: Mikaela Martin
Try for £0.00

The Ellie Chronicles takes up the story of Ellie Linton where John Marsden's popular young adult series The Tomorrow Series left off. Ellie and her band of young friends struggled to survive the war between Australia and an unnamed invading force. The war has ended but not without cost and dangerous enemies still abound. This is the final entry in the postwar trilogy where Ellie must depend on her instincts and force of will to carry her through the day. Mikaela Martin powerfully performs the voice of the brave young woman who is the protagonist and narrator of this gripping series.

Australia's most popular young adult author John Marsden delivers the much anticipated third title in The Ellie Chronicles. Circle of Flight follows Incurable and While I Live, in this post-war series featuring the immensely popular Ellie Linton, heroine and narrator of the Tomorrow series.

"You jam on the brakes and stop the ute right at your front door. You jump out. Not for the first time you run into a house that could be full of guns, with death waiting for you. You don't even think of that until you're crossing the threshold ... You already know what you're going to find. Underneath the fear and horror and panic there's a cold realization that Gavin's body will be somewhere in the house. You can picture what those bullets will have done to his little body."

It is a time of profound change for Ellie Linton. Enemies are everywhere. Some come crawling over the hills others drive in and knock on the front door. Sometimes her friends are there and sometimes they are not. Ellie fights every inch of the way. But when courage and imagination are not enough, when she is trapped and helpless, Ellie must face the end of life as she knows it ... standing alone, sustained only by her own strength.

"Marsden is a master storyteller. He is capable of writing with both versatility and considerable emotional range. Ellie Linton is feisty, fair and honest" ( The Age)

What listeners say about Circle of Flight

This is one of the better books of the Elle Chronicles and also the last. We have enjoyed the follow ups but found them not as good as the tomorrow series. It has been nice to see what has been happening since but also you wonder can there be too much of a good thing? Its something we've questioned throughout these books.

One major thing to note is the new narrator to the last two books. By the third book you do get used to her which helps a lot. Just to add again, she isn't a bad narrator its just you get used to the one you've had for 8 books (tomorrow series and first of Elle chronicles).

Good story and much enjoyed. Still not as good as tomorrow series though. We would recommend though as we did enjoy the Elle Chronicles.

Only took me 5 years!

love this series. I read & listened to the audio for the series for the last 5 years. It's so weird, finally being finished with this series.
I did struggle with this last book because the narrator changed from all of the other books. So, it took me a while to get use to her voice but I did. Love the way the narrator read the story though.

I would (and have) recommended this series to everyone! It's definally a must read.

A great end to this series

A great end to the Tomorrow Series and the Ellie Chronicles! Another great author with another great set of reads! Keep them coming John Marsden!

Where does Circle of Flight rank among all the audiobooks you’ve listened to so far?

The final instalment of the series that started with Tomorrow When the War Began. Beautifully written with a stronger psychological component than earlier books in the Tomorrow series. Strong characters, great plot, and an excellent description of Australian rural life and culture. This series will appeal to a wider audience than the target teen / young adult age range.