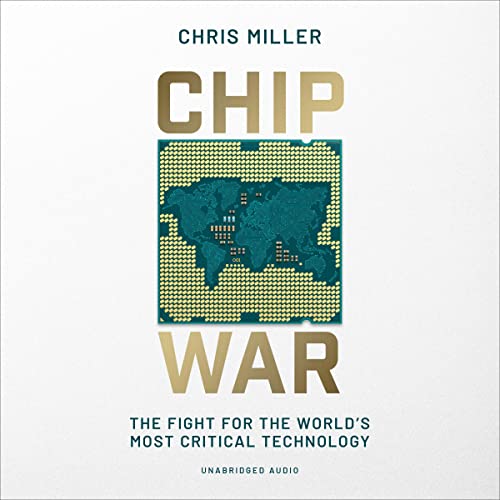 By: Chris Miller
Narrated by: Stephen Graybill
Try for £0.00

Winner of the Financial Times Business Book of the Year Award

An epic account of the decades-long battle to control the world's most critical resource—microchip technology.

Power in the modern world - military, economic, geopolitical - is built on a foundation of computer chips. America has maintained its lead as a superpower because it has dominated advances in computer chips and all the technology that chips have enabled. (Virtually everything runs on chips: cars, phones, the stock market, even the electric grid.) Now that edge is in danger of slipping, undermined by the naïve assumption that globalising the chip industry and letting players in Taiwan, Korea and Europe take over manufacturing serves America's interests. Currently, as Chip War reveals, China, which spends more on chips than any other product, is pouring billions into a chip-building Manhattan Project to catch up to the US.

In Chip War economic historian Chris Miller recounts the fascinating sequence of events that led to the United States perfecting chip design, and how faster chips helped defeat the Soviet Union (by rendering the Russians’ arsenal of precision-guided weapons obsolete). The battle to control this industry will shape our future. China spends more money importing chips than buying oil, and they are China's greatest external vulnerability as they are fundamentally reliant on foreign chips. But with 37 per cent of the global supply of chips being made in Taiwan, within easy range of Chinese missiles, the West's fear is that a solution may be close at hand.

"Fascinating… A historian by training, Miller walks the reader through decades of semiconductor history – a subject that comes to life thanks to [his] use of colorful anecdotes." (Forbes)

What listeners say about Chip War

I’ve no idea what the reviewer who said it’s not about geopolitics is talking about. It sets out the full situation but more at the end of the book which he may not have got too. It’s a mega and scary read that brings home the sheer scale of the challenge in so many ways. I am no technical person and enjoyed it all. How people overcome the technical challenges is beyond me but humbling all the same!

Fascinating exploration of the Chip journey

Fascinating exploration of the role the chip has played in both the creation of the world today through the transfer of technology to east asia post ww2 as well as the current battlelines being drawn between US and China today.

Superb! An excellent study of the market

This audio is really good. The narrator has a good voice and pace. The detail is amazing and I now have a good understanding of the chip situation.

An excellent history of the development of the chip industry from a technological and political perspective. The accounts of past rivalries between the US, Japan and Korea provide really good context for the present moment. I was a little disappointed that the author didn’t offer more insights into possible paths forward from here.

This book feels like it was misleadingly marketed. It's a ton of detail about the history of various chip companies but with very little about geopolitics, particularly contemporary geopolitics. I bought it wanting to understand today's chip wars but there is very little on this.

This was a fascinating book. It covers a lot of technical info, but is presented so well that it doesn’t feel heavy, or a hard slog

Brilliant history of the industry!

A fascinating in depth look at one of the most important topics that has and will continue to define worldwide politics.

Peace and Chips to the World

A terrific book, which will explain the importance of emerging markets and the speed at which it is adapting and spending billions on research and development to provide us with tools, which will help the world be a better place. Never mind that the US is being left behind and wants to impose its will and pace on the world. We are approaching a climate crisis and need to work together with the skills of those in the far East and Asia who are way ahead with producing our daily technology, which a decade ago would have seemed an impossible dream.

A book that everyone must read. A great way to understand the history of Silicon Valley and the role it has played in the world. The role of geo politics and how different leaders made history forming decisions. China and the US. And very much about the role of Taiwan as a center of the global semiconductor world. Excellent book!

Must read for anyone

Great explanation of the history and current status of the chip industry. Gets into detail but also explains the basics

Wealth of information regarding the history of semiconductor. Essential for understanding one of the most critical part of the technological revolution humanity is still going through.