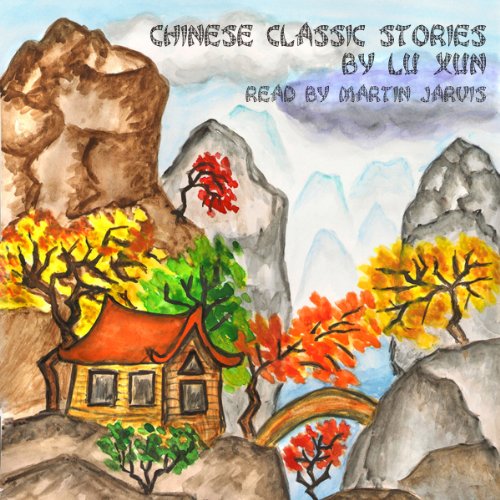 Lu Xun (1881-1936) was born in Shaoxing, in the province of Zhejiang, China. He came from a scholar-official family and by the age of six had begun studying the ancient classics. Regarded as the founder of contemporary Chinese literature, Lu Xun used the pen as a weapon to wage an heroic struggle against imperialism, feudalism and bureaucratic capitalism. The rich heritage he has left behind is a treasure in the literature of the Chinese people.

A Small Incident, My Old Home, Kong Yiji, Regret for the Past, The Misanthrope, Village Opera and After Death are some of Lu Xun's wonderful stories. They give the listener an evocative and intriguing insight into people's lives in China during the late 1920s.

Chinese Classic Stories (1998) by Xun Lu is an excellent collection of seven short stories by perhaps the most important 20th century Chinese writer of fiction. Lu Xun (1881-1936) studied to be a doctor until he realized that he'd rather try to treat the Chinese mind than the Chinese body, and set himself the goal of waking up his countrymen with his fiction. His stories remind me of those of Anton Chekov, in that their sympathetically and precisely observed details of people both evoke a particular culture (here early 20th century China) and express the universal human condition. The concise stories are by turns thought-provoking, moving, and humorous. They also manage to be politically pointed without ever being didactic.

Here is an annotated list of the stories.
--"A Small Incident" features a narrator who can't stop recalling a rickshaw driver's act of kindness to a poor old woman.
--"My Old Home" is a poignant story about the upper class narrator's reunion with his lower class childhood hero-best-friend.
--In "Kong Yiji" the narrator recalls working as a boy in Prosperity Tavern and encountering there a scholar-beggar whose innate dignity was assaulted by adversity and mockery.
--"Regret for the Past" is a detailed, quietly devastating account of the deleterious effects on love of poverty, selfishness, and a conservative society.
--In "The Misanthrope" the narrator recounts his odd friendship with an unconventional intellectual whose ironic life goal seemed to be to live so as to die unmourned.
--"Village Opera" at times recalls Joyce's "Araby" as the narrator relates his childhood memory of going to a big village opera at night and eating pilfered beans afterwards.
--"After Death" is a surreal story in which the narrator dreams that he's died, complete with insects and coffin nails. "What use," he wonders with irritation, "do I have for Ming Dynasty editions?"

Xun Lu's most famous two stories, "The Life of Q" and "Diary of a Madman" are, unfortunately, not included, but the seven here are all quite fine. They feature first person narrators who usually reveal at a crucial point an obtuseness that prevents them from being understanding or sympathetic. They depict savory details about life there and then: rickshaws, superstitions, funeral customs, ancestral images, class divisions, national examinations, popular entertainments, criminal punishments, ingrained nepotisms, salted bamboo shoots, aniseed peas, and fried fish heads, heated wine, and calligraphy.

And Xun Lu writes great descriptions:
--"I saw a woman of about fifty with prominent cheekbones and thin lips standing in front of me, hands on hips, trousered legs apart just like the compass in a box of geometrical instruments."
--"As the words left my mouth, I couldn't free myself of the suspicion that an unseen urchin behind me was maliciously parroting everything I said."

And apt lines on life:
--"It is true that love must be constantly renewed, must grow and create."
--"A bad mood makes people uncomfortable, like a park in winter."

The English translation seems fine, though I know nothing about Chinese. . . perhaps the superb Martin Jarvis who reads the audiobook would make any translation sound good.

Really the title should be "Selected Stories of Xun Lu" rather than "Chinese Classic Stories," which implies a range of stories from a range of authors and eras, but I bet that readers who like finely written short stories set in exotic and vivid settings and packing an emotional punch should like this collection.

Would you consider the audio edition of Chinese Classic Stories to be better than the print version?

I would not have finished a print version of Chinese Classic Stories. However Martin Jarvis narrates this work well, and I was pleased to listen to him to the last word.

I could not change this work to make it more enjoyable. The characters are sad, mean, spiteful, and selfish. I wanted to shake them, to plead with them to help each other and be kinder.

Have you listened to any of Martin Jarvis’s other performances before? How does this one compare?

Martin Jarvis did a beautiful job of narrating this work.

If you could take any character from Chinese Classic Stories out to dinner, who would it be and why?

I know that these stories are considered precious examples of the works of Xun Lu. They are fascinating, and I am pleased I listened to them.

Flawless performance of some short works of a writer who deserves to be ranked with the greatest chroniclers of the 20th century but is not as read as he should be outside of China. And for remarkably cheap to boot!