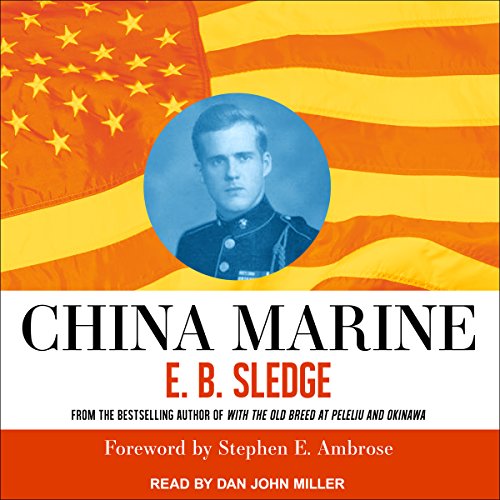 China Marine is the sequel to E. B. Sledge's critically acclaimed memoir, With the Old Breed: At Peleliu and Okinawa.

Picking up where his previous memoir leaves off, Sledge, a young marine in the First Division, traces his company's movements and charts his own difficult passage to peace following his horrific experiences in the Pacific. He reflects on his duty in the ancient city of Peiping (now Beijing) and recounts the difficulty of returning to his hometown of Mobile, Alabama, and resuming civilian life haunted by the shadows of close combat.

Distinguished historians have praised Sledge's first book as the definitive rifleman's account of World War II, ranking it with the Civil War's Red Badge of Courage and World War I's All Quiet on the Western Front. Although With the Old Breed ends with the surrender of Japan, marines in the Pacific were still faced with the mission of disarming the immense Japanese forces on the Asian mainland and reestablishing order. For infantrymen so long engaged in the savage and surreal world of close combat, there remained the personal tasks of regaining normalcy and dealing with suppressed memories, fears, and guilt.

What listeners say about China Marine

Slightly disappointed with this audible book but after Sledges earlier classic with ‘With Old Breed’ this was always going to struggle live up to that.

Just over five hours of narration with four of those spent on his time in China when I would have liked to hear more about his return to the US.

Not sure it’s worth the price.

a brilliant sequel to an outstanding memoir

says it all in the title, it's quiet doffere t from woth the old breed, but it really does compete the story

The perfect follow on to his fist book and a must read for anyone who wants to understand the aftermath of infantry combat.

Is there any QC check on Audible?

If you could sum up China Marine in three words, what would they be?

The mispronunciation of the venerated “corpsman” as “corpse man” is breathtakingly disrespectful. If Sledge were alive he’d excoriate this performance for that reason alone.

Review for audiobook only

If you are going to narrate the man who wrote the quintessential infantry memoir of the Second World War you should get it right. The mispronunciation of “Corpsman” and referring to 3/5 (3rd BN 5th Marines) as “3/5ths” is unacceptable.

Hard to listen to when the narrator mispronounces words. Common Marine terms and proper nowns that are misspoke are like nails on a chalkboard to one who has worn the uniform. The story was good, and explains much of Sledgehammers time after combat ended. Things he wrote about hit close to home with my own experiences.

I wish the bastard reading pronounced corpsman correctly. instead of coresman. Other than that, excellent reading.

I developed an interest E B career after reading With the Old Breed at Peleliu and Okinawa. So decided to follow it up China Marine. I found a connection and could relate to E B's experiences, being a Combat Marine in Iraq.

The narrator aggravated me by mispronouncing Corpsman and referring to The unit 3/5 as a fraction. Some.of the accents used were annoying as well..

Many years ago, I read Sledge’s World War II memoir “With the Old Breed”. This book is considered to be the best WWII memoir written. Engene Bondurant Sledge’s (1923-2001) nickname in the Marines was “Sledgehammer”. The author is a skilled writer and researcher. He primarily used his diary but also reviewed archived material of the United States and China.
Sledge remained In the United States Marine Corp after the end of WWII. He was stationed in China. This book tells of his experiences in post WWII China. The United States at that time was supporting General Chiang Kai-Shek (1887-1975) in his battle against communism. I am impressed at the author’s skill in observing details. The details he provides of his visit to the “Forbidden City” were fantastic. He tells of friendship with a Chinese family and he also learned Chinese. He also tells of his exploration and learning about the history of China. After leaving the Marines he returned to school and obtain a Ph.D. in biology. He was a long-time professor at a University in Alabama. I highly recommend this book.

The book is five hours and eleven minutes. Dan John Miller does a good job narrating the book. Miller has won the Best Voice Award by Audiofile Magazine. He was nominated twice for the Audie and was awarded the Golden Earphone as well as the Listen Up Award from Publishers Weekly.

Very good. Almost as good as his first book!

I highly recommend reading his first book before reading this book. Both books are worth reading!

My review is similar to many other already expressed. Excellent story by Dr. Sledge. Disappointed in the narration.

Although I can grant some mistakes and nuances, I felt the overall performance focused too heavily on trying to replicate a southern accent or other ethnicities. I just don’t think this narrator could pull it off without it sounding just a bit hammy.

A great testament to the human spirit, and how an educated man can do terrible things, suffer a great deal and still return home and find peace eventually.

This book and The Old Breed should be required reading in every high school to graduate!

Really Good book just as good as With The Old Breed on Pelelu and Okinawa. I strongly recommend this book to any lover of history. It was a quick listen, I couldn’t put it down.