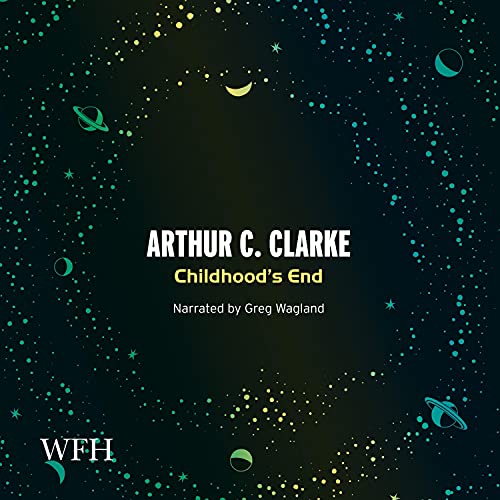 By: Arthur C. Clarke
Narrated by: Greg Wagland
Try for £0.00

When the silent spacecraft arrived and took the light from the world, no one knew what to expect. When the Overlords finally showed themselves it was a shock but one that humankind could now cope with, and an era of peace, prosperity and endless leisure began. But the children of this utopia dream strange dreams of distant suns and alien planets, and soon they will be ready to join the Overmind...and, in a grand and thrilling metaphysical climax, leave Earth behind.

"There has been nothing like it for years." (C. S. Lewis)
"The Colossus of Science Fiction." ( New York Times)

What listeners say about Childhood's End

Perfect example of how a bad narrator can ruin a great book.

The story is great; it’s one of the sci-fi classics. However Greg Wagland is awful. His narration sounds very similar to computer dictation software and his attempts at an American accent fall well short of the mark. In fact any differentiation between characters’ voices is slight, at best, and regularly makes it difficult to know who is talking. I’d recommend buying the audio book of Childhood’s End with another narrator.

This is my first Arthur C. Clarke book, I became interested after watching the mini series on Sky as with the book it was brilliant, and for one that normally believes the book is better I downloaded this one and wasn't disappointed.

The old references to technology are funny in this day and age but the fact it was written in the 50s I glossed over these details.

I would recommend this book to every Si-Fi fan I know.

Gave up - The narration is terrible

I have always been interested in Arthur C Clarke's science fiction. However, I have had to give up on listening to this
audiobook, the narration is so bad I just can't follow the story. His voice just sounds like a droning, monotone of robotic software.

The story may well be great, but it is no good if the narration destroys being able to listen. I guess I will read the book instead.
This is the first time I have been unable to finish an audiobook.

Wonderful story from Arthur C Clarke, really drives home the term "clarke-tech" (technology so advanced it might as well be magic), with his wonderfully crafted endings which is neither good or bad. The only mediocre thing in this book is the naration, it's not so bad as to be distracting, you can go through the book and Greg portrays the overseers decently but sometimes his monotone speech seems like he's reading a script for the role of an accountant. Overall the story is a solod 5/5 with a 2/5 naration. Recomended.

This is a great book. I've read it before, listened to the radio play, and now the audiobook. It will always remain one of my favourites.

However (and isn't there always a 'however'?), the narration is terrible. The reader has no story telling ability whatsoever. There were moments when two or more people are speaking and you can't tell when one is finished and another ends. There's no real drama in his voice and his pronunciation is difficult to behold. He seems to be trying to come over all RP (Queen's English) but that's not what is called for here.

By all means, listen to this because the book is outstanding. Just don't judge it based on the reader.

fantastic story which will keep you guessing until the very end.

I have read so many books. So many. That such a book evaded me all these years is a great pleasure.

What a film this would make!

Combining the physical wonder of aliens and technology with the physycological mystery of the mind, where do we come from and where will we go this book hits the spot. A blockbuster in waiting.

Amazing story. Respect for the mind behind this.

What a great story. amazed at the scale. when I thought I understood the direction it surprised me again.
astounded that this was written over 60 years ago and apart from a few tell tale signs (camera .. ), this could have been written today
what an amazing mind Arthur C Clarke has. Big respect.

For saying this book was written at almost the beginning of science fiction it is a ultimately a chilling tail. It provides a new insight into one scenario , taking use thought c. 100 years ... And leaves so many open questions ...

I really enjoyed this masterpiece! The deep reflections following a curious enough storytelling were mind blowing.

I will not reveal the story itself, but for me it was all about life purpose, and how small we are.

I will now read all Clarke’s books until the last word!