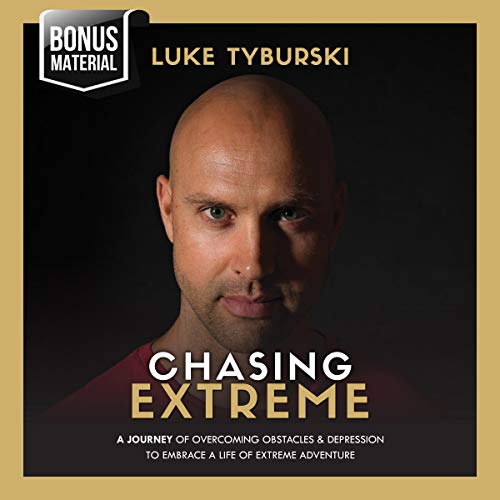 When Luke Tyburski’s dream to play professional soccer on the world stage disintegrated after a series of debilitating injuries, he had no backup plan. His career and everything he’d worked for was over.

He reinvented himself as an ultra-endurance adventurer and discovered his superhuman ability to withstand extraordinary conditions and excruciating pain. From the searing heat of the Sahara Desert to a typhoon-ravaged remote island, Luke’s drive to constantly test his limits stunned his family, friends and fellow athletes. Then came the Ultimate Triathlon - a solo 12-day, 2000-kilometer triathlon across multiple countries that most considered impossible. But, it’s the remarkable secret behind Luke’s reinvention that sets this story apart.

For years, Luke concealed a diagnosis of clinical depression and his determination to overcome the private torment of his illness is as inspiring as it is heartbreaking. Through it all, he clings to his lifelong motto - to never, ever give up, pushing himself to breaking point, emotionally and physically, then rebuilding himself, over and over again.

For the first time, Luke shares how he persevered through some of his darkest moments and how close he came to paying the ultimate price. His story Chasing Extreme is raw, honest, and simply unforgettable.

What listeners say about Chasing Extreme

Inspiring in more ways than one

What I like most about this audio book is the conversational pieces at the end of each chapter, where you get the reflections and more matured insights. You kind of feel like you are getting to know him.
Luke does some amazing things, and inspired me on more than one tough turbo set. At the same time he is an example of what not to do to your body! I think he knows that now….but I wouldn’t bet the farm on him not doing some of that again!
In 2022 he will do an awesome effort in aid of mental well-being awareness…look out for that and support it!

I listened to this after watching The Ultimate Triathlon. At the surface it’s a great account of some epic challenges and quests. I had no idea how embattled with mental health Luke has been throughout the years. The way he describes his darkest times is raw, honest and brave. This book is really about Luke’s quest of self discovery and realisation.
Great listen! Well done Luke you HERO!

Lukes narration is engaging and what he talks about is inspiring and thought provoking.

An honest and thought provoking insight into the world of extreme sports and challenges. Luke writes from the heart as we are taken on his life journey both from a physical and mental health standpoint. A refreshing and inspiring read.

This book was simply amazing for anyone who wants a compelling, heart felt book about struggle and triumph with a dose of inspiration along the way. Great listening for long turbo sessions! Highly recommend!

Just one of the most inspiring books you will read

At the end of each chapter, Luke added his own comments, explaining and giving even more insights. What an amazing idea!

It's a must read!

Reccomended. The book gives you a different prospective to other running books covering also the not so good parts of the challange.

In this world of people outwardly "living their best life" on social media, it's incredibly refreshing to hear Luke talk candidly about the behind the scenes realities of internal battles that even the most inspiring of endurance athletes have to deal with. So many practical take-home tools and strategies for us all to use in our own endeavours.

Great read, better than the movie!

Excellent all around. If you enjoy a glimpse into the mind of an ultra athlete you will surely get some great nuggets from Luke. 🤙

There is something to be said when the person reads the book about themselves! I really enjoyed that at the end of each chapter where he would expand & discuss the different situations. Very motivational & Inspiring! Highly recommend!