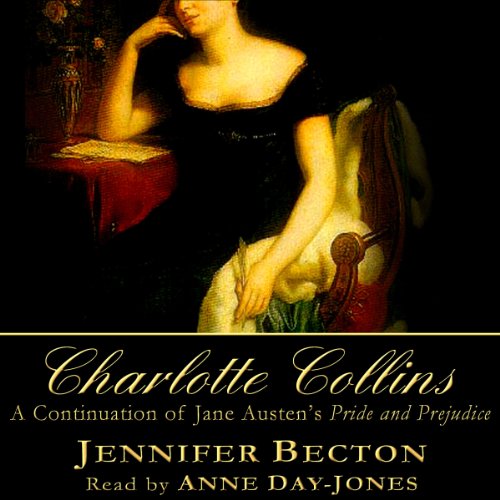 By: Jennifer Becton
Narrated by: Anne Day-Jones
Try for £0.00

When Charlotte Lucas married Mr. Collins in Jane Austen's Pride and Prejudice, she believed herself to be fortunate indeed. Her nuptials gained her a comfortable home and financial security. If she acquired these things at the expense of true love, it did not matter one whit. To Charlotte, love in marriage was nothing more than a pleasant coincidence.

As the years of her marriage dragged by, Charlotte began to question her idea of love as she suffered continual embarrassment at her husband's simpering and fawning manners. When Mr. Collins dies, finally relieving everyone of his tedious conversation, Charlotte must work feverishly to secure her income and home. She gives no further thought to the prospect of love until her flighty sister Maria begs her to act as her chaperone in place of their ailing parents. Hoping to prevent Maria from also entering an unhappy union, Charlotte agrees, and they are quickly thrust into a world of country dances, dinner parties, and marriageable gentlemen.

But when an unprincipled gentleman compromises Charlotte's reputation, her romantic thoughts disappear at the prospect of losing her independence. As she struggles to extricate herself from her slander, her situation reveals both the nature of each gentleman and of true love.

What listeners say about Charlotte Collins

Having read many Pride and Prejudice variations, this one is one of the best so far. The characters are believable ,although they can be recognised as being similar to characters in the original. That being said I thoroughly enjoyed Charlotte Collins and I know I will listen again

A very good story but...

I really enjoyed this well written original interpretation of how Charlotte's story might continue and it was admirably read by the narrator.
My only caveat is that in a story about England why did the author decide to employ American words and grammar like Drape for curtain, Sidewalk for pavement, Fall for autumn and to 'look out the window' In Britain we look out OF the window.
The sense of period was good so why not make it perfect. Presumably American readers can cope with Jane Austen English.
A small point really but it grates every time.

Absolutely Loved it! Really warmed my heart. Most memorable moment difficult to say without spoilers, so I won't. Well written, believable story of Charlotte. I loved the odd comic moments, Austen-esque of P&P.
Anne Day-Jones narrated this so well, distinguishing the characters, and reading with feeling to get the meaning over to us listeners.

Charlotte Lucas was one of the most intriguing characters in Pride and Prejudice, so I was delighted when I stumbled across this "spin-off."
And for the most part, it wasn't a wretched disappointment. There were moments of laugh-out-loud merriment, and I was particularly delighted that Mr. Collins was offed right there in the first paragraph. Ah, Charlotte's new life begins at last! And her little sister, Maria, moves in with her and helps her live it.
There is a lot of charm here. Maria is a goader, a prompter, a thorn in Charlotte's side. And a major concern. Lots of Charlotte's energy has to be devoted to chaperoning her, rather than to thinking about and living her own life. But Maria does get Charlotte to wonder about those widow's clothes she's been wearing, about that widow's life she's been living.
And when Maria starts attracting suitors? Well, those suitors have chaperones also, don't they? And some of them aren't half bad.
I really liked that the writing here, the situations were kept true to the time period. Charlotte's worries and woes are real, given such, and she's fleshed out well-enough that we worry right along with her. I also liked that there was tension even though I knew how it would all turn out. I found my toes curling with delight, hoping that this character would say this and that character would do that. How fun.
What kept this from being a four-star listen, though, was the narration. Anne Day-Jones does a perfectly respectable job with the narrative, but her delivery of male voices, our hero most importantly, comes out flat and monotonous. Even her delivery of Charlotte at the end starts falling into the "dull" vein. So the only thing that keeps the reader/listener going is the writing, the text itself (Great job, Jennifer Becton!). Which is a bummer.
Still, for a romance that's about this particular era, for a character that's already known and loved by Austen fans, this book runs true.

This sequel to P&P starts off promisingly, with well-written prose and a modest appearance of Lizzie. The introduction of American characters is fun, if a bit stereotypical. But the story takes a dive when Charlotte is blackmailed and yet as sordid as the events turn, the story grows duller rather than more exciting. Very good to fall asleep to, I guess. It's too bad. I was really excited about this sequel, of a character I love and is often overlooked.

The narrator is lovely and does a credible American accent.

Ok story - got super long-winded and definitely needed a good couple of hours cut out of it. I persevered by skipping forward several times, and by increasing the speed of the reading so things moved along at a brisker pace.

The performance was excellent, and very enjoyable. Will have to look up more performances by Ms. Day-Jones.

What made the experience of listening to Charlotte Collins the most enjoyable?

It is written in very similar style as Jane Austen

Which character – as performed by Anne Day-Jones – was your favorite?

Charlotte, ran the full gambit given her limited choices due to the rules of the day

Shock at a situation I'd never considered happening in "polite" society, but must have occurred.

No one will ever write or create like Jane Austen, so take the novel for what it is and enjoy it. Perhaps Ms Austen would have gone on to write such books as this, or maybe she was done with Pride & Prejudice altogether, we will never know. This is a plausible history of what may have happened to Charlotte and good read.

What made the experience of listening to Charlotte Collins the most enjoyable?

This story kept you wanting to hear more. I liked the twists and turns.

Although you knew the probable end at times you were not sure. I like the language and the customs.

The narrator had good voice range but was stilted at times

Engaging and not uncomplimentary extention of Austin's character of Charlotte Collins . The immersive performance stirred feelings reminiscent of those encountered in the cinema.

This was a very good companion story to Pride and Prejudice (I wouldn’t call it a continuation since it’s solely focused on Charlotte and Maria to a lesser extent). The writing was faithful to Jane Austin’s style. The story was creative and sweet. There were some turns in the story that I thought were well executed. The only criticisms I have are the quality of the audio recording (the narrator did a great job but I could hear where the recording of one chapter ended and the other began) and that the last quarter of the book was a little drawn out. I was ready to get to the ending a little quicker. But I would highly recommend this book. It’s the first audiobook I’ve listened to in one sitting.

Loved this particular spin off of Pride and Prejudice - Ms. Becton stays as true to Austen as is possible by an author in the 21st century could. I loved that Eliza & Ftizwilliam are only featured briefly and yet the story is so stirring and tender. I appreciate how Ms. Becton chose to let Jane Austen speak for her beloved characters and instead focused on lesser known & developed characters. I thought she was very true to Charlotte Collins, Maria Lucas and English culture in the early 19th Century.

This novel feels like a continuation of the Pride and Prejudice that Jane Austen would have written. Enjoyed it!

i liked this story

Would you consider the audio edition of Charlotte Collins to be better than the print version?

I liked the story and what happened in the story.

if you like pride and p. try this story out.