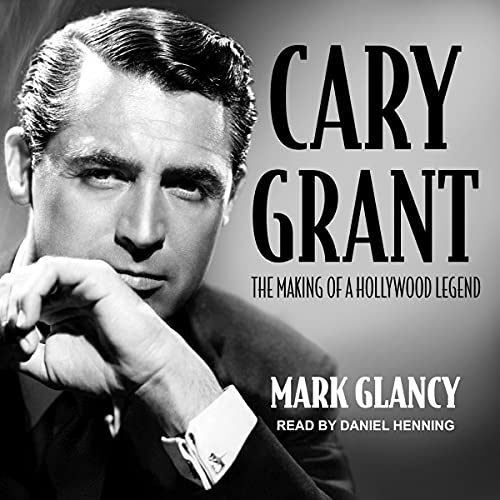 Cary Grant: The Making of a Hollywood Legend

By: Mark Glancy
Narrated by: Daniel Henning
Try for £0.00

Archie Leach was a poorly educated, working-class boy from a troubled family living in the backstreets of Bristol. Cary Grant was Hollywood's most debonair film star - the embodiment of worldly sophistication. Cary Grant: The Making of a Hollywood Legend tells the incredible story of how a sad, neglected boy became the suave, glamorous star many know and idolize. The first biography to be based on Grant's own personal papers, this book takes us on a fascinating journey from the actor's difficult childhood through years of struggle in music halls and vaudeville, a hit-and-miss career in Broadway musicals, and three decades of film stardom during Hollywood's golden age.

Leaving no stone unturned, Cary Grant delves into all aspects of Grant's life, from the bitter realities of his impoverished childhood to his trailblazing role in Hollywood as a film star who defied the studio system and took control of his own career. Highlighting Grant's genius as an actor and a filmmaker, author Mark Glancy examines the crucial contributions Grant made to such classic films as Bringing Up Baby (1938), The Philadelphia Story (1940), Notorious (1946), An Affair to Remember (1957), North by Northwest (1959), Charade (1963), and Father Goose (1964).

What listeners say about Cary Grant: The Making of a Hollywood Legend

Clear narration. Lots of detail and history in the biography . A full account. A Hollywood history through the life of Cary Grant.

Great overview of Grant's life. I appreciated how much the author focused on his films; very often in these Hollywood biographies the film's only get a passing mention, but Glancy concentrated just as much on Cary Grant's incredible body of work, as well as his personal life.

One of the very best biographies I have ever read or listened to. I am amazed that somehow it has escaped the notice of Audible reviewers and I wish I could remember how I found it, but I am so thrilled that I did.
I could not stop listening to this fascinating account, not only of the main character, but of in-depth critiques of films, explanations of casting, designs, scripts and box office.
There are extraordinarily personal accounts of emotions, friendships, directors and other actors. All of those detailed memories along with lifestyle, culture and society of the thirties and forties and into the seventies.
One of the biggest pleasures of this book were the truly detailed descriptions of Cary Grant's many films with their storylines, characters and critical responses.
The author explains in the beginning of the book that he had access to personal papers and archive material in a vault that Cary Grant kept. This proves to be a treasure trove of amazingly accurate memories dating back to the actor's earliest life, then well into his career over many years.
In addition to the biography itself, Daniel Henning narrates beautifully, even using a slight Cary Grant-type speech when quoting the actor.
I could go on and on about this absolute hidden gem. So whether you are at all familiar with Cary Grant or know nothing about him, try this biography because it reaches into so much of the times and places and people of many past eras. And now, I simply must re-watch a number of Cary Grant's films as I've gained such wonderful insight into each one.
This biography has become one of my most favorite Audible books.

Nice story ….throughly enjoyed …..he stands out as a nice man and great sense of humor…

Makes me want to watch his movies again

Very thorough history of Cary Grant and his 72 movies. Very well narrated too. I appreciate that the book was chronological and frequently let the listener know what year it was since I don’t have the book in front of me.