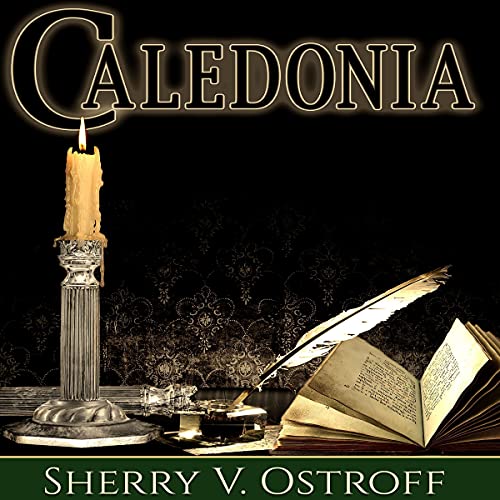 Anna Issac's choices are bleak. Suicide is more appealing than marrying the revolting Frenchman her spiteful brother has chosen for her. The only other option is to beg a man she barely knows, a Highlander, to help her run away. Escape would be a challenge for any 15-year-old, but it is particularly difficult for a Jewess living in 17th century Scotland. Anna's tale would have remained a secret, except three centuries later the death of Hanna Duncan's father on 9/11 unleashes a chain of events that leads her to an ancient key with a peculiar etching. Once deciphered, the clue points Hanna toward a safe deposit box in Edinburgh where Hanna uncovers Anna's role in the creation of Scotland's only colony. Caledonia promised to be the trading hub of the New World, but starvation, ship's fever, and incompetent leadership dogged the 1,200 colonists from the moment they left Scotland. More than half would be buried at sea or in the colony's muddy cemetery, and Anna would not be immune from the dreadful conditions. The outpost was deserted in less than a year.

Caledonia is a tale of these two strong women separated by time but bound by mysterious circumstances. Twenty-first century Hanna keeps uncovering evidence linking her to 17th century Anna. Both women experience romance, adventure, and tragedy as the listener witnesses them becoming more and more connected.

What listeners say about Caledonia: A Novel

If an audio book can be a page-turner, this would be one of them! I thoroughly enjoyed the storyline, and the narration really brought it to life. The accents helpfully drew a distinction between the two timelines - something that may not have been as clear in reading the book without the benefit of audio. The story left some loose ends, so I look forward to the sequel!

The story was so intense and hard to put down. Anna had so many trials to go through. But obviously those times were hard. The first part of the story was so easy to listen to. But at a point the overlapping lost me a bit on what was going on with Anna. And the ending never told if Anna made it back. Although I will assume she did due to the safe deposit boxes. I wish the author would have just included that part. Over all the story was fantastic! The Narration was as well and the accents were great, really bringing you into this tale. I love how the author thought outside the box to create some unique ideas for the time. Like the safe deposit boxes!


Two strong women, born centuries apart, yet confronted with a similar theme of political, cultural and religious conflict. The journey through time brought suspense. There was mystery, adventure, history - and even a little spice.
This book was very good with some good twists. You won’t be disappointed.

I love this book!

I couldn't stop listening the story is well written and the narrator just does such a good job you don't want to turn it off. It has a little romance but it has alot to do Scottish colonist and their journey to the Americas. It's so very good! I'm on to book two it picks right up so far excellent!

The narration is killing the story.

I'm only in the first chapter... it may have to go back.

1. The main character only stays in her 'accent party of the time.

2. Anna's father has no accent and it feels like there's no attempt to give him masculine voice.

3. Anna's says IAN and her father pounces it as EAN. As father and son, they should have the same speech.

I feel like I'm stuck in an Ireland, Scotland & English swirl of language. The story takes place (at l r art at this point) in Scotland in the 1600s.

I'll update once I decide whether or not I'm going to persevere and finish the book.

This is a new to me author. I was blown away with this book. I like history and this bookis all about Scottish heritage and colonization. Iiked the present day relative goes to Scotland to find out about her ancestors and learning where the Jewish customs came from.

The narrator was stupendous. She had the Scottish accent perfectly. She kept my interest from the first to the last. I wish I could give this book ten stars.

I loved this book

I was interested in this audible book from beginning to end. I loved the characters and even the moving back and forth in time to represent their "real time" events. I never knew about the colonization of the Scots to the Panama. I appreciated the fact that the author explained, at the end, what in her story was based on actual historical events and locations, and what she took liberty with to develop the story. She did a great job of researching for this book. I think the narrator did a wonderful job and the only detail that I will criticize was sometimes I had to adjust my volume, as when she stopped and restarted it ran from whisper quiet to loud. Minor detail though. I am so glad that this is a series as I want to know what eventually happens to both Anna and Hannah. I will download the book 2 this week!

Absolutely loved this book. The storyline kept you interested all the way through and the narration was fabulous. Loved the Scottish accent throughout. Gave great authenticity. I highly recommend this book.
Wendy

One of the best historical novels I have read

WOW! I absolutely loved this book. The book jumps back and forth between the past and today. The ending was great . The last part that told a little more about Caledonia,

The narration is understanding too. The accent makes the book appear more authentic. It is easy to understand tis narrator.

I received this book at my request and have voluntarily left this review.

EVEN BETTER THE SECOND TIME 'ROUND

I read CALEDONIA when it first came out and loved the book. Read the sequel, Mannahatta, and loved that even more. Then I decided to listen to this audio version and I was astounded how much I loved it the third time! Listening to the narrator's lovely lilting Scottish accent really helped immerse me in the world of the characters. It also opened my ears to the nuances of the writing, the skill of the author. It was almost like watching a movie--only better, because I could picture the protagonists any way I wanted to. I now realize why radio plays were once so popular. They engage the listener as an active participant. I highly recommend downloading this audio book, even if you've already read it. And, if you haven't moved on to the sequel, what are you waiting for?! Like I said, it's even better!

This book was Amazing! The storyline and historically accurate details make sure you can not put the book down! The Characters are very real, personal and their endeavors become the readers. The Narrator is perfection! Her depictions are absolute. I can not say enough about the book. You will not be disappointed!

SeEmed to stray as a story of relationships and family, but story turned out to be historical an Caledonia. Both were goog, but the mixing of them was mildly discombobulating at times. Story of Caledonia was very interesting. An song was rather quick and I'm not sure if all the threads were tied up.
Good narrator. The Scottish brogue was beautiful, and understandable. Not too heavy.