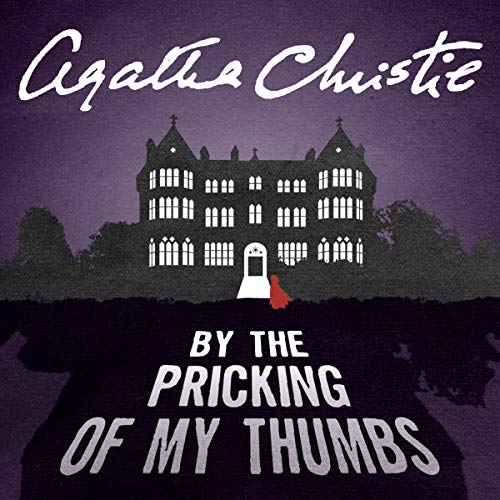 By the Pricking of My Thumbs

By: Agatha Christie
Narrated by: Hugh Fraser
Try for £0.00

When Tommy and Tuppence visit an elderly aunt in her gothic nursing home, they think nothing of her mistrust of the doctors; after all, Ada is a very difficult old lady.

But when Mrs Lockett mentions a poisoned mushroom stew, and Mrs Lancaster talks about "something behind the fireplace", Tommy and Tuppence find themselves caught up in an unexpected adventure involving possible black magic.

"The most macabre and eerie Christie I have read for a long time." ( Sunday Express)
"Ladies disappearing from homes of rest, sinister empty houses, hints of gang-leaders mixed with black magic: mystery at the usual high Christie level." ( Evening Standard)
"All beautifully plotted in the way that Mrs Christie is famous for. The title is from Macbeth: 'By the pricking of my thumbs, something wicked this way comes.' Wicked indeed!" ( Best Sellers)

What listeners say about By the Pricking of My Thumbs

A rather elderly Tommy and Tuppemce (mainly Tuppence) investigate the disappearance of an elderly lady from a Rest Home; their only clue is a painting of a house. Before long they are wrapped up in a mystery involving historical child murders and a criminal gang. An interesting and creepy twist at the end - does this spell the end for Tuppence...? A rather unusual Christie with a good mix of characters. As always, beautifully narrated by Hugh Fraser - I wish it was possible to get every Agatha Christie read by him!

Something special this way comes

I am a fan of AC. Its quite simple, she writes well, the plots are great and nowadays I feel transported to a simpler life when I read her stories.

So how did I get on with this one...? I rated it. Hugh Fraser is a splendid reader and has the knack down to a tee. His narration is concise and clear, the characters come to life and the pace/quality are spot on. No peaks and troughs here.

I could quite imagine our principle characters off having their adventures whilst being able to come home at the end to a nice roast chicken. I shall certainly be avoiding Anywhere named Sunnyridge in future.

i do love my AC and read by Hugh Fraser, Hastings himself, is an excellent choice.

Would you listen to By the Pricking of My Thumbs again? Why?

By the Pricking of My Thumbs is a return listen for sure because it balances a wonderfully twisty whodunnit with genuine pathos.

Tommy and Tuppence, two characters that Christie had used before, are now approaching old age and this device gives Christie the opportunity to make readers feel genuinely moved by their attempts to deal with this.

Which character – as performed by Hugh Fraser – was your favourite?

Hugh Fraser, a familiar voice to Christie fans, brings the characters to life with ease.

By the Pricking of my thumbs

To start with, this was a bit confusing, but once you got into it, the storyline, became very intriguing.
This is the first Tommy & Tuppence book I've listened to and I'm tempted to buy some of the other book's, in the same series I hope that when I'm their age, I've got the same enthusiasm for life

“Was it your poor child?”

When Tommy and Tuppence visit Tommy’s elderly Aunt Ada in the Sunny Ridge nursing home, Tuppence falls into conversation with a sweet but rather confused old lady called Mrs Lancaster. As Tuppence, in a thoughtful moment, gazes at the fireplace, she is startled when Mrs Lancaster asks, “Was it your poor child?” The way she asks sends a shiver down Tuppence’s spine (and mine). A few weeks later Aunt Ada dies and when they return to the home to collect her belongings, Tuppence determines to speak to Mrs Lancaster again. But they discover Mrs Lancaster has gone – collected by her relatives. Tuppence, with nothing but her instincts to go on, finds this puzzling and worrying, and decides to track Mrs Lancaster down. She meets with a brick wall, however, of lawyers and bankers none of whom seem to know exactly where Mrs Lancaster might be…

This is a late Christie, published in 1968, and as with many of the later books the plotting isn’t as tight as when she was at her peak. But although it all gets a bit rambly in the middle, it has a wonderfully spooky atmosphere. From Mrs Lancaster’s spine-shivering question, Tuppence finds herself entering a maze of old rumours and gossip, much of them about murdered or missing children. People are very willing to talk, but memories are vague and Tuppence finds it impossible to pin down hard facts or dates.

All she has to go on is a painting that Mrs Lancaster had given to Aunt Ada, of a house by a canal that Tuppence feels sure she has seen once before, perhaps from a car or a train. So while Tommy is off at a hush-hush conference with his old colleagues from his days in the Secret Service, Tuppence digs out train timetables and old diaries, and sets out to repeat any journeys she has made over the last few years in the hope of spotting the house again. But it seems that someone doesn’t want Mrs Lancaster to be found, and Tuppence soon finds herself in danger. Will Tommy find her in time?

Tommy and Tuppence are the only detectives of Christie who age in real time, so in this book they are now in their sixties. Between this and the nursing home theme, there’s quite a bit of musing on ageing in the book, both on the physical limitations it brings and on the mental decline that faces some elderly people. Christie, herself ageing of course, does this rather well. Tommy and Tuppence still spar as much as they always have, but Tommy perhaps worries about his wife a little more now, feeling that Tuppence should recognise that she’s not a young adventurer any more and should take more care for her safety. But that wouldn’t be Tuppence’s style at all! Once she gets her teeth into a thing she doesn’t let go, no matter where it leads her.

Hugh Fraser really is a fantastic narrator! He always brings out the humour in the books, but in this one he also creates the spooky atmosphere brilliantly, never over-acting but knowing exactly how to chill the reader. He copes with a range of elderly lady voices beautifully, bringing out all the fun of Aunt Ada’s rudeness and the pathos of Mrs Lancaster’s confusion. He differentiates the characters with a different voice for each and never slips, so that it’s always easy to tell who’s speaking even when several people are conversing together. And he does a great job with Tuppence’s character, making her just as enjoyable as she is on the page!

Despite the woolliness in the mid-section, the basic plot is strong and the unsettling atmosphere lasts all the way through to the chilling ending. 4½ stars for me, so rounded up.

The basic plot outline is great and I like the whimsical beginning where Tuppence goes searching for a house she’s seen in a painting.

But the way it’s written…! It’s difficult to believe this and some other Christie’s books are written by the same person who elsewhere is a master of setting the scene or painting a character in one sentence.

This book by contrast is repetitive and convoluted. Too many side plots that detract from each other. Much of the dialogue and ‘inner dialogue’ is tedious and keeps repeating the obvious.

With the ideas and themes here, the story could be thrilling but instead falls flat.

Hugh Fraser voices and timing in this performance

Amazing performance from Hugh Fraser who captures the characters answers of this mystery. So enjoyable

Not one of her best

I’ve read this before and remembered it being pretty bad but I wanted to listen to all the Tommy & Tuppence stories on Audible.

A convoluted story, way too much exposition, stilted, repetitive dialogue and a distinct lack of the humour that lifts the previous T&T books, makes this hard work. It’s simply not a very good book.

Hugh Fraser is wonderful, but even he can’t save it.

Kept me awake at night

Hugh Fraser does great performance and the tale kept me gripped till the end. If like me you have a vivid imagination, then I recommend you don't read or listen to this book just before bed. Agatha Christie incorporates humour, horror, suspense as well as interesting insights into human behaviour.