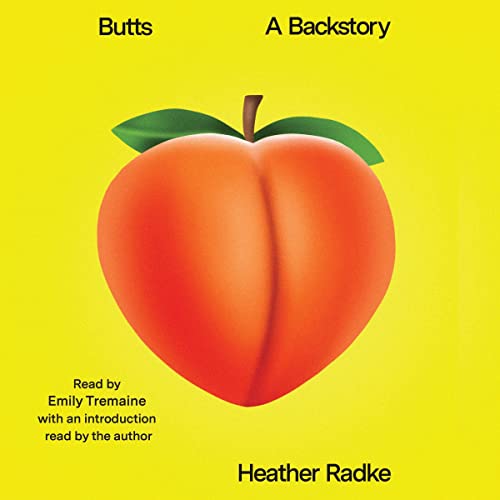 *ONE OF THE MOST ANTICIPATED BOOKS OF FALL: Esquire, Time, LitHub, The Every Girl, BookPage*

“One of the year’s most ingenious and eye-opening cultural studies.”—Publishers Weekly, Best Books of 2022

Whether we love them or hate them, think they’re sexy, think they’re strange, consider them too big, too small, or anywhere in between, humans have a complicated relationship with butts. It is a body part unique to humans, critical to our evolution and survival, and yet it has come to signify so much more: sex, desire, comedy, shame. A woman’s butt, in particular, is forever being assessed, criticized, and objectified, from anxious self-examinations trying on jeans in department store dressing rooms to enduring crass remarks while walking down a street or high school hallways. But why? In Butts: A Backstory, reporter, essayist, and RadioLab contributing editor Heather Radke is determined to find out.

Spanning nearly two centuries, this “whip-smart” (Publishers Weekly, starred review) cultural history takes us from the performance halls of 19th-century London to the aerobics studios of the 1980s, the music video set of Sir Mix-a-Lot’s “Baby Got Back” and the mountains of Arizona, where every year humans and horses race in a feat of gluteal endurance. Along the way, she meets evolutionary biologists who study how butts first developed; models whose measurements have defined jean sizing for millions of women; and the fitness gurus who created fads like “Buns of Steel.” She also examines the central importance of race through figures like Sarah Bartmann, once known as the “Venus Hottentot,” Josephine Baker, Jennifer Lopez, and other women of color whose butts have been idolized, envied, and despised.

Part deep dive reportage, part personal journey, part cabinet of curiosities, Butts is an entertaining, illuminating, and thoughtful examination of why certain silhouettes come in and out of fashion—and how larger ideas about race, control, liberation, and power affect our most private feelings about ourselves and others.

What listeners say about Butts

Race baiting with a proto femcel

The hatred of whiteness, men, and cis gendered people is prevalent throughout.

One theory is posited, then, within the same breath, she presents oxymoronic counterpoints that directly argue against her most recent point in an effort to race bait or instill more of a wedge between all sexes.

She expounds on ridiculous topics of how Sir Mix a Lot and a certain song of his, does *nothing* for black women on healthcare and job equality.

She begins with the Greek statues of 'perfect' butts, then glosses over centuries of history, only to attempt to point the finger of why butts became popular, with a black woman who was paid to perform in England. Even after this woman went to trial, at the push of white dogooders, the author still maintains that the black artist wasn't there of her free will, even when the artist claimed she was and didn't want to go home.

She glosses over the point she repeatedly displays, that cultural shifts in attraction and gender roles and definitions aren't to blame, but simply white men and women (only straight, of course) are to blame for everything that happens anywhere.


She has some education, which explains the nomenclature, the words, the wonderful writing, but the leaps she makes, the laughable overall point she tries so hard to prove with contradictory examples, was enough to make myself and my wife burst into laughter.

This book is the kind of gutter tripe better read as a review on the feminist side of extreme sites like r/femcel, the twisted side of Tumblr, or in the hilarious fringe areas of Twitter.

Look for the screeching harpy's and the overuse of the negative "Becky" and you'll be on your way.

From the introduction through how aerobics classes were developed to keep women passive and obedient, this book was beyond a chore to listen to. Here is a taste of the book:

Sarah Bartman had a truly awful life
Author: Having a big butt, I felt connected to Sarah

Bustles were made of wire and used to make women look like Sarah Bartman.

Author: I couldn't imagine trying to fit my big butt in a bustle.

Sir Mix A Lot wrote a song celebrating big butts to empower women who were often marginalized in pop culture for not being thin.

Author: I had a big butt in middle school...and in highschool too!

Really regretting not having a gold membership to Audible which prevents me from returning this and losing a credit.

the narrator sounds so bored which deadens the author's humorous writing. i want to return the title

This book is so thoroughly researched, thoughtful and funny. The writer is excellent, and thorough. This book is so worth your time, and gives voice and explanation as to why our views of the female body are so warped/complex.

Going in many directions

The author did not hesitate to criticize the achievements of female titans like Beyoncé. Several shots taken at celebrities felt unnecessary. There was a heavy focus on morality. The author could have shown more appreciation for the arts. The “prisoner’s view” of exercise classes felt a little extreme, as there was no reference to the cardiovascular benefits of staying fit.

This book may be interesting to people in 50 years

- The subject matter, which sounds like a fun premise, is portrayed in a very boring light. Yes, it's a book, but i still feel like we're not having fun talking about butts, we're instead analyzing aspects of it, few of which manage to be interesting or engaging. The author remembers that butts are a source of comedy and fun, but made a book that doesn't reflect either of those features.
- The more contemporary aspect of it is so recent for most readers that there is nothing new to be gained from it. If you know the gist of the story of JLO, KimK and twerking you probably won't read anyting new or anything new that is worth listening to.
- This is a book about butts that managed to ignore latin american perspective about butts which is the one that eventually moved to North America. No talk about Brazil, Colombia, Argentina or Mexico, who have plenty of cultural history around butts.
- The racial implication of the whole book is not wrong, but it is boring and continuously repeated. Yes black people have/like butts, and white people didn't have/like them but now they like them and try to get them. Yes there was once an african pseudoslave with a big butt who toured europe as a freak show. And we try to connect literally everything to her.

Informative about your backside.

This is a delightful romp into the world of butts. Delightfully insightful at the beginning, the book loses a little steam as we move to the future because the present is still in our mind. That said, Heather remains thoughtful and thorough from beginning to end. A quick and delightful lesson.

This is a worth while read. Think anyone could learn some history of how Butts in European and US societies have been viewed from a social, political, and racial point of view.

It starts with a personal story of trying to understand her own history. It will not provide much context beyond that framing as the family is mostly US or European. t does not talk in details on how butts are viewed in other cultures beyond that. It does give context on how women’s butts have been viewed through that limited scope in a good way.

The narrator is solid and easy to listen to. Think it gives life to words well.

I would have like to have the writer look a bit more outside her culture to see how other places in the world view butts. Also would have like to see some comparisons on how women’s vs men’s butts are treated in sexuality, culture, race etc.

Overall the essay on her understanding her own backstory and her points of view is well done and recommend this book for most people.

I was hoping for a fun tale on Butts through history. Instead it is a tale on how white men effect the meaning of a butt over time. I wish I had know the direction this book would go before I started. Waste of time an money. I suggest you look for a different book

Many cultures over time and men/women have been butt oriented.

A history of butts

This is a deep dive into how we landed in our current (western, American, hegemonic) perception of the ideal female butt: not too big, not too small, just right—with a healthy dose of historical context. The narration is excellent, and the telling of the history of Sarah Baartman alone makes the book worth it