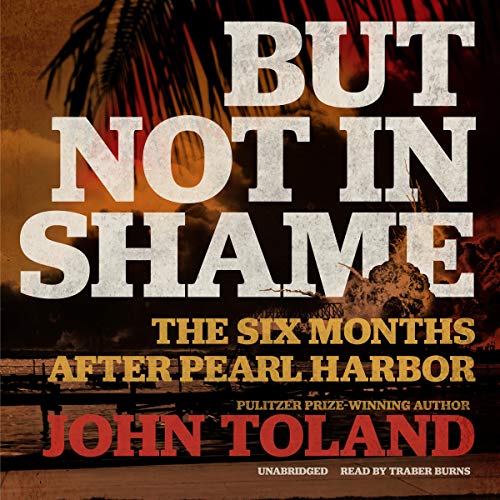 But Not in Shame

By: John Toland
Narrated by: Traber Burns
Try for £0.00

December 7, 1941 - at exactly 7:55 am on a seemingly peaceful Sunday morning, the United States was plunged into the greatest war in history!

What were the events which determined the Pearl Harbor catastrophe? What were the last few days on Wake Island like? What really occurred on the infamous Bataan Death March, and why did it happen? How did MacArthur make his dramatic escape from Corregidor? And what is the story behind the greatest capitulation in American history, General Wainwright’s forced surrender of the Philippines?

But Not in Shame begins with the race to decode intercepted secret Japanese messages the day before the Pearl Harbor attack and ends six months later with the stunning victory which unexpectedly turned the tide - the Battle of Midway. More than an exciting narrative of battles and leaders, it is a story of the individuals on both sides who took part in the most critical decisions and momentous events.

What listeners say about But Not in Shame

I read this book back in junior high and high school. (I was the only person to check out the book for 6 yrs) Very insightful. I wish that Tom Weiner could have narrated. I loved his narration of "The Rising Sun" Another great novel by John Toland. Thos story provided many details during those dark early days of World War 2 in the pacific.

Narrator's acting way too much

Narrator's acting way too much. Making it unlistenable. unfortunately I'm gonna have to return it. He is that bad. someone needs to make it clear non-fiction writing should not be narrated by someone wanting to be an actor.

A True Classic Finally on Audible!

This is one of the best and original accounts of the events between Pearl Harbor and Midway in the Pacific War so it has a special place in my heart. John Toland interviewed many of the key figures and scores of witnesses from these events, and it makes for an exciting listen!

That said, it's important to keep in mind that it's an older account of World War II events written in the early 1960's. Because of this, some of the information, especially about the Battle of Midway, is outdated or has since been proven to be different. With the declassification of more intelligence information in the 1960's and 1970's that Toland didn't have access to, and further in-depth study by historians in the 1980's and 1990's, I'd say this isn't the best source for information on that particular battle.

Overall, it was a riveting listen!