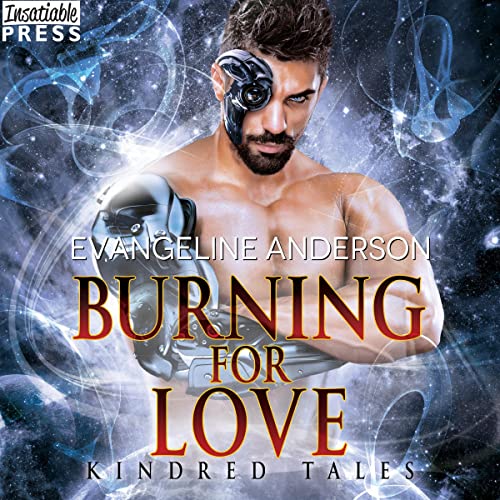 By: Evangeline Anderson
Narrated by: Mackenzie Cartwright
Try for £0.00

The princess and the cyborg...

What happens when a Dark Kindred warrior with no emotions is sent to guard a frightened Princess with Fire Blood?

Can James save Ka'rissa from the sinister Duke who wants her dead?

Listen to Burning for Love to find out!

Ka'rissa is a Princess of the Very First Family, destined to rule all of Regalia Five. Unfortunately, her esteemed lineage comes with a genetic price - she has what is called "Fire Blood", which causes her to overheat so drastically that she is in very real danger of spontaneously combusting and burning to a pile of ashes. But that isn't the only danger in her life - someone is trying to kill her. After a botched assassination attempt, her uncle hires a Kindred warrior to serve as her bodyguard and Constant Companion. Normally, it would be improper for a young lady to have a male so close to her, but in this case it's all right because Sir James, as he is known, is a cyborg with no human emotions.

J-8 is a Dark Kindred who has taken the designation "James" in order to fit in at the Royal Court of Regalia Five. His mission is to guard Princess Ka'rissa until she finds a proper suitor to marry and rule her planet with. The man she marries will "Slake her Heat" and cool the Fire Blood in her veins, which puts her at risk of spontaneous combustion. James knows all this and he also knows he shouldn't care who Ka'rissa chooses as her future mate. But when feelings of protectiveness turn instead to possessiveness, he has to accept the fact that his emotion damper may be broken and he is having feelings for the curvy little female.

As it happens, Ka'rissa is having feeling for James as well. How can she help it when he's so dashing and handsome? When her latest suitor, Duke Grabbington, begins making some very improper advances, the big Kindred rushes to her rescue. But when her Chastity Wire starts giving her problems and James must fight a duel, will their love survive? Or will Ka'rissa be forced to marry another?

Listen to Burning for Love to find out!

What listeners say about Burning for Love

This book made me laugh until I cried; the characters names, innocence, and ignorance was a perfect mix of humor. Mackenzie did an excellent job of narrating all of the characters. I love these Kindred stories. Can’t wait until the next book is released on Audible!