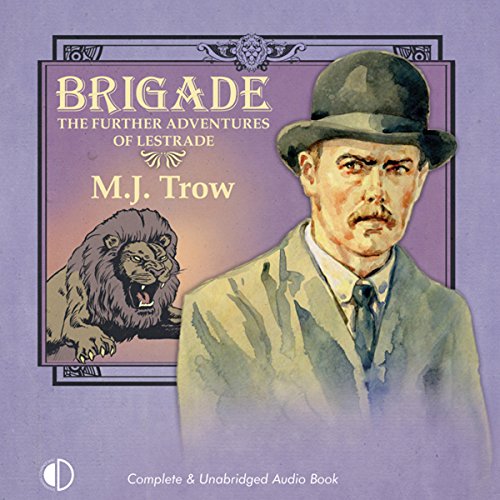 Brigade: The Further Adventures of Lestrade

There is a new broom at Scotland Yard: Nimrod Frost. His first “little job” for Lestrade is to investigate the reported appearance of a lion in Cornwall. This is hardly a task for an Inspector. Yet even as Lestrade questions a witness, a man is reported dead - horrifically mauled.

Having solved that case to his own satisfaction, Lestrade returns to London and to more suspicious deaths - all old men who should have died quietly in their sleep. Is there a connection? Lestrade's superiors, especially Nimrod Frost, discount his speculations, and he finds himself suspended from duty. But that is a mere technicality. He moves from workhouse to royal palace, from back stage at the Lyceum to regimental dinner in his search for enlightenment.

What listeners say about Brigade: The Further Adventures of Lestrade

This is the second in the series so I'd recommend starting with the first but in any order they are still good. Lestrade's inevitable injuries combine well with moments of tongue in cheek humour. Very enjoyable.

another enjoyable story by m.j.trow.
Winston churchill makes a small appearance in this one.
well written and performed by m.j.tow I have enjoyed all the books I have listened to so far and am looking forward to the next one.
recommend this series.

I love this author

He is both intense and witty...and very cunning and skilled. He is able, perhaps because he also performs a perfect Lestrade, to insert tongue in cheek contemporary phrases from songs and I laugh more with each new book I read. Thanks!

I'm not sure why other listeners have disliked the author's narration, I found it really enjoyable! I've listened to hundreds of audiobooks, and there have certainly been performances that were not up to par; this was not one of them. In fact I found myself thinking that another narrator may have missed a lot of the intended humor in the writing, which only comes through in the characters' dry or deadpan responses as read by the author.

I'm looking forward to listening to the next book in the series!