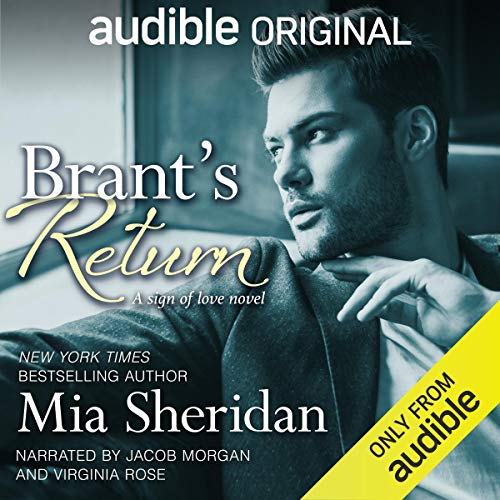 By: Mia Sheridan
Narrated by: Jacob Morgan,Virginia Rose
Try for £0.00

Brant Talbot runs a glitzy network of high-end bars in New York City, enjoying all the benefits of the lavish lifestyle he's worked so hard to achieve. When he learns that his estranged father is dying, he must return to his family’s Kentucky horse farm - and to a past he thought he left behind.

While facing long-buried truths, he collides with his father’s secretary, Isabelle Farris. Despite his undeniable attraction to the beautiful, independent young woman, he sees secrets in her eyes and believes she has designs on Graystone Hill.

Now the one woman he can’t afford to trust is about to become the one he can’t let go.

What listeners say about Brant's Return

Great author, good blurb, good narrators............ a tale about who will inherit a Kentucky Thoroughbred Stud/Horse Ranch, written by someone who clearly knows nothing about thoroughbred horses or breeding. Thoroughbred horse training and breeding in real life are separated as they require totally different skill sets so most of the horse events in the story are not credible and plain ridiculous, which is jarring; it's a good story with a good premise otherwise. It's beautifully narrated nonsense.

In the rom/com cowboy genre books by Lorelei James, every horse fact, regardless how small, throw away or irrelevant is correct, written by a woman who clearly knows the subject inside and out.

The equine subject was the reason I chose this book, so had to give up on it when it just became too ridiculous, regardless of how the MCs were performing.

A ‘rags to riches’ story and a criminal case that draws in both the past, the future, love, passion and romance.
Very well narrated and Mia Sheridan has joined my personal list of Authors to definitely read again and follow. A great book.

Very good read, the only con was half way through the book you were able to predict the story

I thoroughly enjoyed this emotional drama, released as an audible original (I love it when authors release on audio first). Returning to his estranged father’s ranch answering to the plea of his father’s secretary, Isabelle Farris, and connecting with more than the land and the horses, Brant Talbot realises what he’s been missing living in the City. An enemies to lovers of sorts. I loved the story, which had more than one twist added in, the characters were strong, sexy and vulnerable at times. The setting is perfect, I’ve recently been enjoying novels set on ranches and this is no exception. I loved the story, the characters, the writing, and most definitely the narration. I love Jacob Morgan, and Virginia Rose was a perfect partner for him, their interpretations of Brant and Isabelle were spot on.

When Brant returns home to see his dying estranged father, he doesn't expect to fall for his secretary Isabelle. But the horse farm in Kentucky is Isabelle's sanctuary and Brant's life is in New York. Do long distance relationships ever work? Mia Sheridan's writing is exciting and sophisticated. The story took hold of me from page one and kept my attention all the way through as secrets and lies from the past are revealed in this thrilling and emotional read. The narrators are excellent and I highly recommend.

Ok but not great

This book was ok but it really didn’t grab your heartstrings like you’d expect from a Mia Sheridan story. Something has changed since her earlier books - demands from publishers which has meant she’s churning out books but doesn’t have the time to put some soul in them maybe?

The story had way too many predictable plot points, and cheesy hallmark movie/5 afternoon movie moments as well. Real shame as I was looking forward to being swept up in a story and romance, but I was just left hanging.

I’ve heard the male narrator before, but under a different name (Zachary Webber) - lovely voice, though he does often sound a bit bored. Not heard Virginia Rose before but she was good.

Mia Sheridan does it again! She can write a story about anything and I'd probably love it.
In this book Isabella is a little broken but finding her way through tragedy and loss. Brant is a successful business man who doesn't realize how much he needs his family. These two come together and the chemistry is off the charts. I love how their relationship progresses and how the family dynamic comes together. The ending was PERFECT!!!

The narration was great, both narrators are fabulous so it's no surprise that they are great together.

Excellent story! Excellent narration! I laughed I cried and I swooned!! So good!! I’m glad I gave it a chance!

5 stars for Mia, always such great stories, writting has an easy flow for narrators to sound perfect!!!

This author and I don’t always mesh and that’s ok because not everyone is for everyone. So I took the recommendation from a friend to try this one. I am so very glad I did because this was a fantastic story.

Brant and Isabelle’s story hit me in all my feels. I loved the characters, their struggles, and their triumphs. Brant is who you would expect a bar owner to be. The fact that when he comes home he is hit in the face with Isabelle and how he falls for her. Le Sigh so sweet, so difficult too. He really fights his past and his present.

I loved how Isabelle’s story shaped who she is and how she deals with people. She is an inspiration.

The Epilogue though I didn’t think one thing needed to be in there, only because so much hurt had already been thrown at one character. But other than that loved this book.

The narration was phenomenal! I am a huge fan of both they bring life and preform the words it’s really the only way I can describe what they do.

I really enjoyed this book!! It had twist and turns all through it and you could feel the attraction of the two main characters. The love scenes got a little long (lol)but that’s just me. Romance was awesome and the narrators did a fantastic job!! Love the dual narration 👏🏻👏🏻

Not everything lost can’t be found

A story of loss and betrayal and being found and repaired told as only Mia Sheridan can.

Jacob Morgan and Virginia Rose were perfection as these characters, bringing to life this story told in dual narrative.

Had me holding my breath one moment and daydreaming the next. I enjoyed this one.

This was a great story with excellent narration! I usually stick to certain authors but I’ll definitely be searching out more Mia Sheridan!

Brant's Return is the love story of two people wounded by traumatic events in their past and brought together by chance and their love of Brant's father and their Kentucky ranch. Lots of conflicting emotions, ups and downs and twists and turns make this an intense and enjoyable romantic read. Highly recommended, feel good romance.