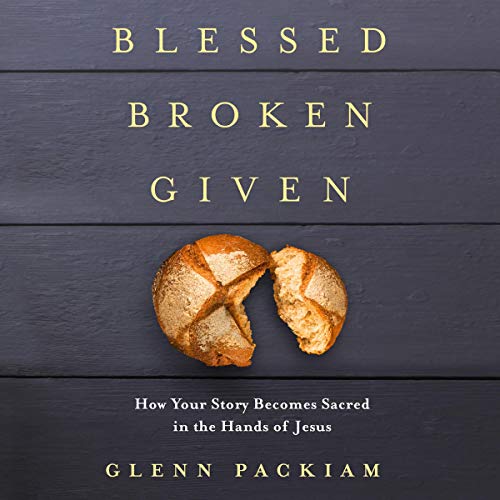 An invitation to find beauty and meaning in the ordinary and imperfect aspects of your life; not as a call to settle for less, but rather as a way to mysteriously participate in God's power and purpose.

Glenn Packiam wants to empower listeners to find great joy, purpose, and passion in their daily living. While bread may be one of the most common items on our dinner tables, Jesus chose to take it at the Last Supper and invest deep, wonderful, and transcendent meaning in it. Like the bread that was blessed, broken, and given; listeners will see how God uses ordinary experiences to cultivate their mission and their brokenness to bring healing to the world. The ordinary is not the enemy; it is the means by which God accomplishes the miraculous. Through clear biblical teaching and practical steps, Packiam leads the listener into a more purposeful, directed, hopeful future.

What listeners say about Blessed Broken Given

Participating with God in the Ordinary

Blessed Broken Given has bread as the central metaphor of the book. Mostly that bread is directly referencing eucharistic bread. Occasionally it is more mundane, but because I have followed Glenn Packiam for years on twitter and read a couple other of his books, I know that even when he is directly referencing more mundane bread, he is still keeping the eucharistic bread in the frame. It is one of the tensions that I think Packiam’s ministry holds well. Glenn Packiam is the pastor of a local church that is part of a multi-site non-denominational mega-church. He is also an ordained Anglican clergy. He is high-church theologically in a low church setting. If I were local to him, I think I would want to be a member of his church. It is not distant from my theological position; I attend a multi-site non-denominational mega-church that I am not always in theological alignment with, primarily around wanting it to be more sacramental.

Blessed Broken Given is a book fo theological wisdom about what it means to be a Christian. It tells stories to teach as Packiam circles around his point from a couple of different directions. In a late chapter, where he starts talking about what it means to live in a Post-Christian society, one which no longer embraces Christianity as a central organizing metaphor, but one that also has not found a way to express itself outside of being no longer Christian, he has the following quote:
"This is the generation that wants justice but not any sense of righteousness. We hunger for community but have no taste for the Cross. We want the goods of the good news without the Christ of the gospel. We want the life of the kingdom without the claims of the King. Maybe this is a reaction born of deep disappointment."

Part of what is advocating is walking away from the church as a player in the culture wars and a reclaiming of the church as a carer of the poor and powerless. A church that values the breaking of bread, not just as the eucharistic table, although that is central, but around the local tables in people’s homes. A church that is not just for ourselves in a type of ‘radical hospitality’ that refocuses the church, not on doing things, but being with people. We do things for and with people, not because we are the savior, or because we are earning salvation, but because we love them.

One of the orientations of the book that I appreciate is that Glenn Packiam frames his thoughts not as ‘look at this thing I have found,’ but ‘look at this thing that the historic church has traditionally done, let’s rediscover it together.’ That orientation, I think, is essential. As much as I appreciate NT Wright as an author and thinking and church leader, I think one of the big mistakes in his orientation is that he does not root his work in historical theology. That makes sense because he is a biblical theologian, not a historical theologian. But I think he would have a much easier time of making his points if he worked with a historical theologian that was able to help him root his theological work in church history instead of it being ‘new.’

I mostly listened to this on audiobook, moving back and forth occasionally between the kindle and audio. Glenn Packiam narrated his Blessed Broken Given, and this is an excellent example of why I like authors to narrate. These were his words, and you felt them. They were his emotion and wisdom, and that carried through.

There was not much here that has not been spoken by someone else. But uniqueness is not the focus of the Christian life, Christ is. The focus of the book is not newness but rediscovery. And the audience is not church leaders or academics, but average Christians that know there is something more and is seeking after it. William Berry, in his book Finding God in All Things, references Tolkien’s essay On Fairy Stories. He makes the point that stories are one of the ways that we can know the possibilities of the world; not only tragedy but joy, wonder, heroism, and inspiration. Berry weaves that through several chapters and ends the book with a reflection on how Frodo and Sam can help us imagine Christ and Easter.

Packiam is similarly not focused here on new theological exploration, as much as catching the imagination of the reader for where God is moving around us; for seeing God in the common (like Bread) and how that common can be used by God. Blessed Broken Given is a book of stories, not as simple illustrations, but a book of stories as methods of catching our imagination. And as such, this is a book worth reading, probably especially for groups that can talk together (preferably over food) about how God shapes the ordinary around them.

Very thankful for this book and has reframed common meals and the Lord’s table. Wonderful food for thought about how we can and are blessed, broken and given for one another and the world around us. I appreciate the perspectives those currently find themselves outside the church, and historical perspectives offered.

Packiam reads his manuscript as if he were in a hurry to get through it. He needs to slow down. I just finished listening to Dirty Glory by Pete Greig and The Newcomers by Helen Thorpe - both of these are read at a much more appropriate speed and with much more appropriate intonation. Packiam makes some good points in the book, but they are obscured by his manner of reading.