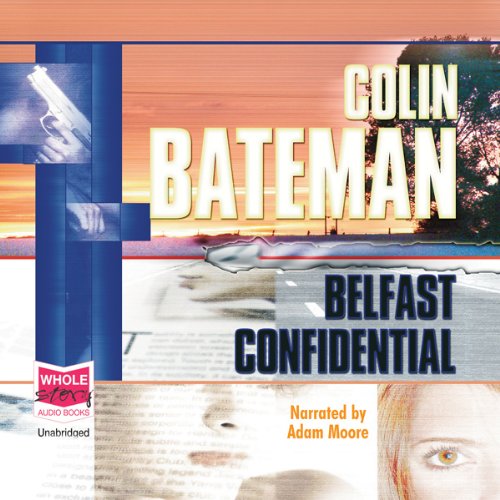 By: Colin Bateman
Narrated by: Adam Moore
Try for £0.00

They say moving house is one of the most stressful things you can do. Well, as far as Dan Starkey's concerned, "they" can stick it where the sun don't shine because right now helping his wife with the unpacking is the least of his worries. No sooner than Dan has moved into his new Belfast home, his best mate, Mouse, is murdered, leaving him to catch a killer, become editor of the obscenely successful scandal magazine, "Belfast Confidential", and compile the much-coveted Power List.
©2006 Colin Bateman (P)2006 W. F. Howes Ltd.
Literature & Fiction Suspense
Show More Show Less

What listeners say about Belfast Confidential

What a fantastic read!

This was the best audio book I listened to on holiday this year, the plot is great funny imaginative, the characters are brilliant. The storyline makes you not want to turn the book off. I would recommend this to anyone who would like to listen to a refreshing new book. Can't wait for more by the same author.

At half the length this would have been a very funny book but it became too repetitive, too predictable. The characters apart from the 'hero' are too flat. I am struggling to finish it.

Very funny and entertaining from start to finish. I will definitely listen to more of his books.

And do the people of Northern Ireland really pronounce coup to rhyme with loop rather than shoe? Or is it just this fella?

loved it. Happened upon this author by accident and have now bought everything available. I love the style, dark humour that makes you laugh out loud. I felt like I'd lost an old friend when I finished it, and I want more..........

I found this novel brilliant.I am a native of Northern Ireland and this listen was just fantastic.The plot twists and turns with a perfect amount of comedy and reality.I was addicted,and I am only disapointed that Colin Bateman has no other audio books on audible.I even went out and bought a novel of this author.I feel anyone can enjoy this and being from Northern Ireland was not a plus or minus.The humour mixed with the thriller was wonderful.

This book is rather rude, a little crude and very, very funny.

Although it's amusing and quite quirky, the author tends to lay on the Irish 'bit' rather too much for my taste. In addition, the book meanders along part thriller, part human interest without really getting anywhere - that's why I call it frustrating.

Well read, certainly, but in the end an unsatisfying read and I found it (too much of) an effort to keep listening to the end.

The characters and the scene is well developed, there are some fun characters in the story and the relationship between husband and wife as the dialog plays out is fun at times. The main character means well but does have you wanting to give him a slap sometimes, which is by design. Colin Bateman is a good writer and takes you on an interesting ride. I liked the book and the ending had me tuned in, I would recommend it with the caveat of strong language, if that is not your cup of tea then I would avoid but it seems to be part of the realism of the story and works where its used.