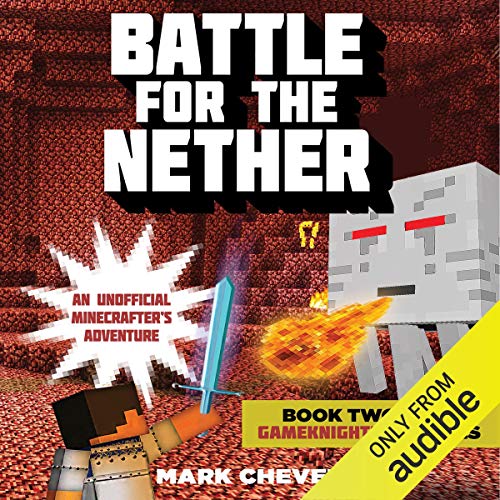 Battle for the Nether

By: Mark Cheverton
Narrated by: Chris Sorensen
Try for £0.00

The action-packed Minecraft follow-up to Invasion of the Overworld!

Gameknight999, a real-life Minecraft user trapped inside the game he loves to play, and his friend Crafter have transported to a new server. Malacoda is the King of the Nether, a terrible ghast that wants to destroy all of Minecraft with his massive army of blazes, magma cubes, zombie pigmen, and wither skeletons. Knowing the lives of all those within Minecraft - as well as those in the physical world - are depending on them, Gameknight and Crafter will need to search the land to recruit an NPC army. But the battles Gameknight's already fought have left him doubting his abilities, and he'll need to dig deep to find his courage if he's to have any shot at victory. Epic battles, terrible monsters, heartwarming friendships, and spine-tingling suspense... Battle for the Nether takes the adventures of Gameknight999 to the next level in a nonstop roller-coaster ride of adventure.

What listeners say about Battle for the Nether

Though quite long, this book is sick! I recommend this to children around 9-12 yo or if you are a Minecraft fan!

Long but worth the wait for the battle at the end

Some complicated words but amazingly good. I would say to understand it you should be 9 years or older. Great book and there are many more great books in the series to listen to aswell!

It is a very good book and I really enjoyed it. If you're a minecraft fan like me, you should definitely try it, though you should probably listen to the first one before you listen to this one.

The story is so good but the narrator doesn’t have the best voice to be honest.

so good the best amazing I love it so much ❤ really good! my little brother loved it too

I love the book

I love this book and want to l

Most words I didn’t know

Wow because great book and wow because terrible narrator m. An amazing story but a terrible boring narrator

Batle For The Nether

I loved Batle For Nether it was fantastic!I was scared out of my mind in the dream were Arobus strangles Gameknight999.

I’ve read every book since I found this

This is amazing. I think you should read it!!! So far I think that its NOT OKAY to grief. Greifing just makes you lose happiness, And dip the others buckets. I know many kids have learned about Buckets in school and I am not afraid to use it. I’ve read this book and it made me realize.. You don’t need to hide your feelings.. Just be YOU! It will make you be happy and will spread kindness to others. If you spread kindness there is most chances that they will pass this on to another person. Then another and so on. Like a chain reaction. If your not going to say something kind. Keep it to yourself. Rather keep it in than destroy someones day. You don’t know what its like at home to others. Even if you have a bully, Be kind. Even if they are mean to you, You won’t feel better saying the same to them.. Have a great day/night! Play Minecraft!

Battle for the nether