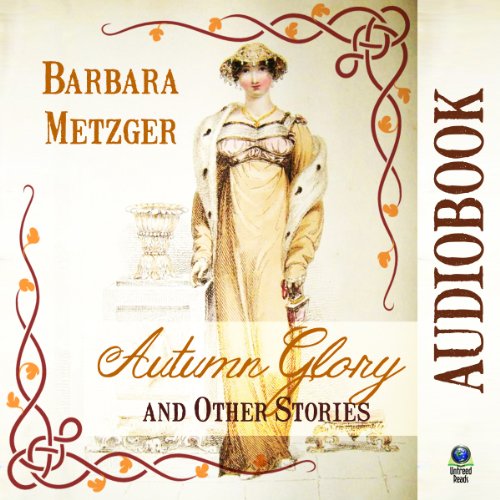 Autumn Glory and Other Stories

By: Barbara Metzger
Narrated by: Stevie Zimmerman
Try for £0.00

Originally published in separate anthologies, and out-of-print for many years, these three novellas by legendary Regency romance author Barbara Metzger are in one volume for the first time ever!

This collection includes the following stories:

What listeners say about Autumn Glory and Other Stories

Would you listen to Autumn Glory and Other Stories again? Why?

It is a great romp! Who wouldn't listen to it again? Also Barbara Metzger obviously loves dogs as they often appear in her books. This book is 3 short stories collection and two have dogs in them.

I like all of them really. She makes even badies sound human...

Have you listened to any of Stevie Zimmerman’s other performances? How does this one compare?

Nope, but I feel I should, therefore got another book by Ms. Metzger which she also narrates.

Fire in the hotel. I was on the edge of the seat because of the dog. Also felt sorry for the poor devil dog... (Everything has happy ending! Relax people)

I wish more of Metzger's books were available. I love to read her. Her books are short(er) and sweet.

It kept my just entertained enough to be satisfied while I ran errands, so from that point of view it was a credit well spent. Not a favorite though.

Have you listened to any of Stevie Zimmerman’s other performances before? How does this one compare?

Her performance was lovely, but this audio—like Metzger's others—had some production problems with skipping/repeating. Nothing too bothersome though.

Actually, a Lifetime Original Movie isn't a bad analogy for what this short story collection is. Moderately amusing fluff that does the job well enough if you're in the kind of mood, but is otherwise not particularly noteworthy.

The mildly frustrating thing about these stories is that I know Metzger is a better writer than she displays here. Indeed, the stories all had flashes of great wit and humor—it just wasn't sustained the way it ought to have been. For example, the idea of the dog Imp (in the third story) was brilliant, and I so wish it had been better fleshed out. Read 'A Loyal Companion' for a much better example of what the author's capable of.

As a side note, this is the first Metzger book I've run into that has anything resembling risque language or adult references. It doesn't bother me—and the references are quite mild by most standards—but it's sufficient that this is one audiobook I'd be careful about playing around my grandmother. Just a heads up for anyone else that's used to putting Metzger's books on in the car with conservative ears around.

Next best thing to Georgette Heyer!

Metzger is one of my favorite writers in this genre. I've read all her books in print. She almost always places likable characters into engaging situations and tells their stories with good comic timing. I hope more of her work becomes available in Audio format. Apparently these three short stories were never offered in paper format - they are digital offerings available as an ebook or Audible only. Ms Zimmerman does a good job delivering the character voices and the well paced fun.

Very good almost as I imagined it!!

I would because it was a lovely hilarious book, I feel Barbara Metzger has the best Georgette Heyer feel and love all her books! While I love her longer books, I feel there is a place for the slightly shorter regency!

I like how she is scheming to get all her sisters married to the people they love and while she is doing it the grandest gentleman is falling in love with her.

What does Stevie Zimmerman bring to the story that you wouldn’t experience if you just read the book?

while I love Stevie! I think she needs a bit of early Phyllida Nash A la The Corinthian by Georgette Heyer, if she could listen to that audiobook before recording the next Barbara Metzger that would fab!

I would love to see all the Barbara Metzger books in audiobook form especially
1. An Affair of Interest
2. Saved by Scandal
3.The Primrose Path
4.A Suspicious Affair

This is a novella with three short stories by Barbara Metzger:

""Autumn Glory" was my favorite of the three short stories, followed by "A Match Made in Heaven - Or Hell", then followed by "The Management Request". Like the only other book I read from Metzger the writing is witty, the characters charming, and the story fun and entertaining.

I’m glad I found this author, I like the way she writes and her smart but simple stories.

The short stories are lovely witty and amusing clean romance short stories. The narrator did a great job although the editing could be better but it doesn’t really impact. If you are looking for a short and witty romance, I highly recommend.