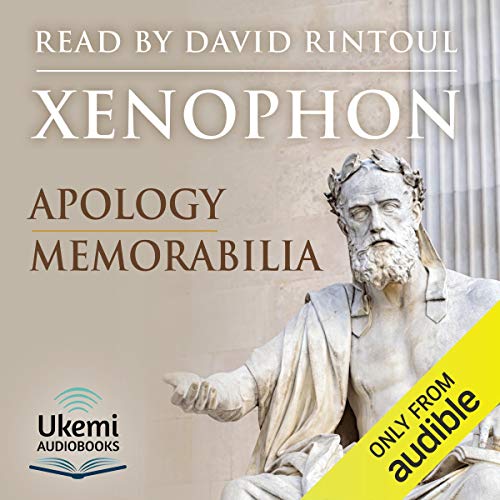 By: Xenophon
Narrated by: David Rintoul
Try for £0.00

Xenophon was a friend of Socrates, and yet his concise memories of the iconic philosopher have lived under the shadow of the more voluminous accounts by Plato. Yet Xenophon’s two works - Apology and Memorabilia - are, in many ways, more entertaining and more accessible, and they present a different view of the man who embodies a clear mind, temperate, ethical living, sharp intellect and humour.

For example, in Apology - the account of Socrates’ trial for corrupting youth and impiety - Socrates declines to mount a truly robust defence on the basis that in some ways it would be better to accept the judgment of the court, however unjust, and die, rather than ‘pay the old man’s forfeit’ by declining into senility and illness.

Xenophon was not at the trial, being on the Persian campaign at the time, and bases his account on the reports of Hermogenes, who was there. But he was a student and even friend of Socrates and clearly knew him well. Memorabilia offers a succession of engaging tableaux in which Socrates (as in Plato’s accounts) interacts with a variety of prominent Athenian figures, challenging, explaining, expounding and generally running rings around his interlocutors.

The topics are often about everyday civic life, purpose, manners and attitudes. He gives clear instruction on the value of good friends, how to be a good general, a good cavalry leader; unexpectedly, he compares the role of the businessman with that of the general and clarifies what is needed by an individual aspiring to be head of state. When someone asks Socrates what seemed to him the best pursuit for a man, he answers, “Doing well. He who does nothing well is neither useful in any way nor dear to the gods.”

In Xenophon’s affectionate portrait, Socrates comes across as a truly human personality, warm, courageous, highly principled but also generous towards the more wayward members of society that he meets. These works are certainly far more than just an adjunct to Plato and are worth listening to on their own terms. Apology is translated by O. J. Todd, Memorabilia by E.C. Marchant. This recording again features David Rintoul, who takes the role of Socrates in the widely praised, multivoice recordings of the Complete Dialogues of Socrates by Plato, also available on Audible from Ukemi Audiobooks.

What listeners say about Apology and Memorabilia

An insight into Socrates the man

I had always wondered at the admiration that so many philosophers - including my favorite thinker, Epictetus - had shown for Socrates, because I'd always found the Platonic dialogues very tough going. I mentioned this to a friend of mine, a professional philosopher, and he suggested I read Xenophon's Memorabilia.

So I was extremely happy with Ukemi released this title. I feel, as I listen to David Rintoul's exceptional performance, that I'm hearing the words of Socrates as he would have spoken in his own voice. I'm not, of course, denigrating the works of Plato - the cornerstone of Western thought.

But we can never tell how much of the Socrates in Plato is Socrates - and how much a proponent of Plato's ideas.

In Xenophon, I don't have that feeling. The connection is direct. I sense that Xenophon wrote with no agenda other than to demonstrate the exceptional character and wisdom of his teacher

As for the performance? It's Ukemi. To those who know Ukemi, that's enough. To those who may not, Ukemi has worked tirelessly to make many of the greatest classics available in audio editions that raise the bar for quality and performance.

If you, like I, have wanted to meet the real Socrates, I can think of no better introduction than this.

Enjoyed much more than Plato

I really enjoyed this reading and Xenophon’s recollection of Socrates. The way Socrates is depicted here shows his ideas in a clearer way than in Plato’s writing, in my opinion.

An excellent reading of two classics

Few figures in history have been a better moral or intellectual example than Socrates. Xenophon paints him beautifully and the reader is worthy of the author.

I'm not nearly smart enough to be able to comprehend this fully on the first listen, and so I assume most others won't either. listen, and then listen again. There's lots of wisdom, but it can be difficult to extrapolate.