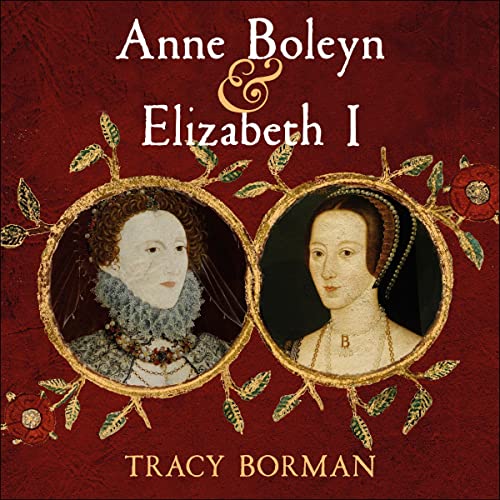 Pre-order: Try for £0.00
One credit a month, good for any title to download and keep.
Unlimited listening to the Plus Catalogue - thousands of select Audible Originals, podcasts and audiobooks.
No commitment - cancel anytime.
£7.99/month after 30 days. Renews automatically. See here for eligibility.

One of the most extraordinary mother and daughter stories of all time - Anne Boleyn, the most famous of Henry VIII's wives and her daughter Elizabeth, the 'Virgin Queen'.

Anne Boleyn is a subject of enduring fascination. By far the most famous of Henry VIII's six wives, she has inspired books, documentaries and films, and is the subject of intense debate even today, almost 500 years after her violent death. For the most part, she is considered in the context of her relationship with Tudor England's much-married monarch. Dramatic though this story is, of even greater interest - and significance - is the relationship between Anne and her daughter, the future Elizabeth I.

Elizabeth was less than three years old when her mother was executed. Given that she could have held precious few memories of Anne, it is often assumed that her mother exerted little influence over her.

Nothing could be further from the truth. Elizabeth knew that she had to be discreet about Anne, but there is compelling evidence that her mother had a profound impact on her character, beliefs and reign. Anne's radical religious views shaped those of her daughter, and as a woman who wielded power over a male-dominated court, she provided an inspiring role model for Elizabeth's queenship. Even during Henry's lifetime, Elizabeth dared to express her sympathy for her late mother by secretly wearing Anne's famous 'A' pendant when she sat for a painting with her father and siblings.

Piecing together evidence from original documents and artefacts, this audiobook tells the fascinating, often surprising story of Anne Boleyn's relationship with, and influence over her daughter Elizabeth. In so doing, it sheds new light on two of the most famous women in history and how they changed England forever.

What listeners say about Anne Boleyn & Elizabeth I