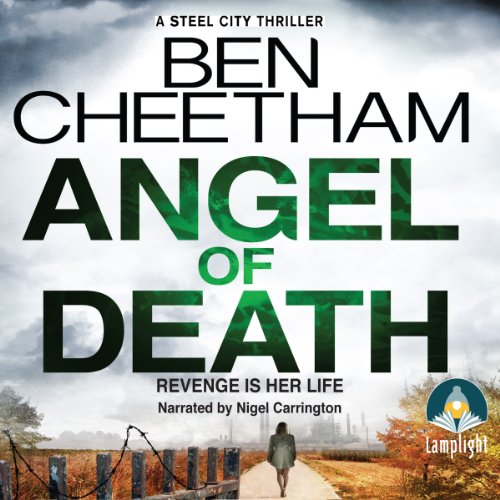 By: Ben Cheetham
Narrated by: Nigel Carrington
Try for £0.00

Would you break the law to see justice done? In Sheffield, a bankrupt businessman has murdered his family. It seems like an open-and-shut case: A desperate man resorting to desperate measures.

In Middlesbrough, a woman named Angel is heading south. She is a woman alone. A prostitute. Now a murderer. And she has only one thing on her mind: Revenge.

Two crimes, a hundred miles apart, but a terrible secret connects them.

What listeners say about Angel of Death

A dark an unforgiving story

If you could sum up Angel of Death in three words, what would they be?

I liked that it turned out to be more complex than I first thought.

Have you listened to any of Nigel Carrington’s other performances? How does this one compare?

Yes, when one of the main characters died.

Not for the faint hearted, but contrasted by warm relationships as well as the hard edges. A fast paced story that may keep you awake!

Well written and well read. It describes a kind of cruelty that can never be excused or justified. This was my second listen of this book.

Excellent story from start to finish!

I have loved this book by the awesome Ben Cheetham. The story & the characters had me gripped from page1.
For me personally very rarely does a story grip me like this one has, I became fond of Jim Monaghan and Grace Kirby as I followed their story through.
Great links to the City of Sheffield as well.
Perfect book for anyone who enjoys a thrilling crime that is in places hard hitting with a powerful storyline. Highly recommended. One of a series of books that I cannot wait to investigate further!

Great! quick paced story, easy to follow but difficult to put down, brought to life by a brilliant narrator - loved it.

Highly recommended, I enjoyed this book from the first chapter. Gripping and difficult to put down.

This was an enjoyable listening experience. The story is dark and hard-edged, with a fair degree of complexity and moral twists and turns. It kept my interest and was well-narrated.

The story kept me interested. A depth of story which kept on revealing. Great narration. Easy listening and characters which are interesting.

If you could sum up Angel of Death in three words, what would they be?

Have you listened to any of Nigel Carrington’s other performances? How does this one compare?

No I havent , but he is very good indeed. I will look out for more of his performances.

There were lots of those kind of moments throughout the story.

This is a great story , you don't know quite how it will end ,and believe me it is a super ending.. Easy to listen to and you will want to keep on reading it, thrilling ! Loved it.

Not so Sweet Revenge

This is the second Ben Cheetham novel I've listened to, and it's a tighter faster and more consistent novel. The story line is ably supported by Nigel Carrington an excellent narrator. The focus of this novel is Revenge to which the author adds some food for thought with two characters on opposite sides of the argument.