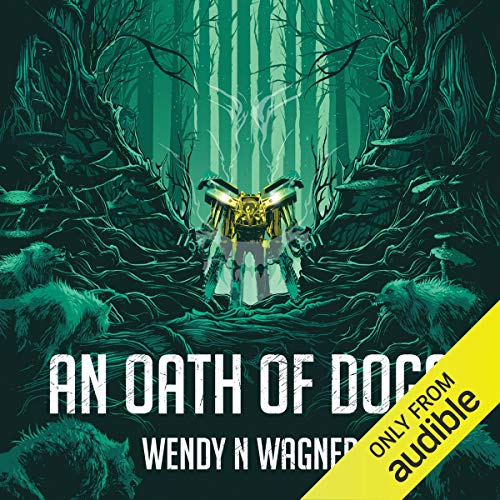 An Oath of Dogs

By: Wendy N Wagner
Narrated by: Amy Finegan
Try for £0.00

Kate Standish has been on the forest-world of Huginn less than a week, and she's already pretty sure her new company murdered her boss. But the little town of mill workers and farmers is more worried about ecoterrorism and a series of attacks by the bizarre, sentient dogs of this planet than a death most people would like to believe is an accident. That is, until Kate's investigation uncovers a conspiracy which threatens them all.

What listeners say about An Oath of Dogs

murder mystery on a mysterious planet

Hopeful ending to an otherwise deliciously eerie book. Great read. Great message. I don't want to give away too much. I want you rapt in everry word listening for the next reveal in the slowly building tension.

I don't quite know how to feel about the near-magical things that are glimpsed amidst the otherwise grounded, rational things depicted in the story.

I am less enthused by Weird or Horror elements that show up in what all identifiers point to being SF. I suspect I am spoiled by Hard SF, and have become vulnerable to strange tales, like the near-magical elements of The Dreaming Jewels, for example, or Killdozer.

If the tale had been set in past or present times, on Earth, I would have categorized it as a Fantasy, in the vein of A Winter Haunting.

Still, liked it a lot. Hopefully nothing is spoiled here.

I kept waiting for it to get good but it didn't.

It started off ok. But it just kept getting weirder and weirder. There were too many characters, and they weren't memorable enough to differentiate one from the other. I couldn't keep track of all of them after a while.
A lot of the plot points didn't really add up either. Especially the ending. Like, that was a major let down. Like they build it all up to "we're taking down the bad guys" and then they just get prescribed new meds and everything is ok even though they don't take down the bad guys.
Overall the book wasn't very original. I know I can't really get into how it wasn't original without spoilers so
spoilers


oh and that robot you see in the cover art? THERE'S NO ROBOTS IN THIS BOOK